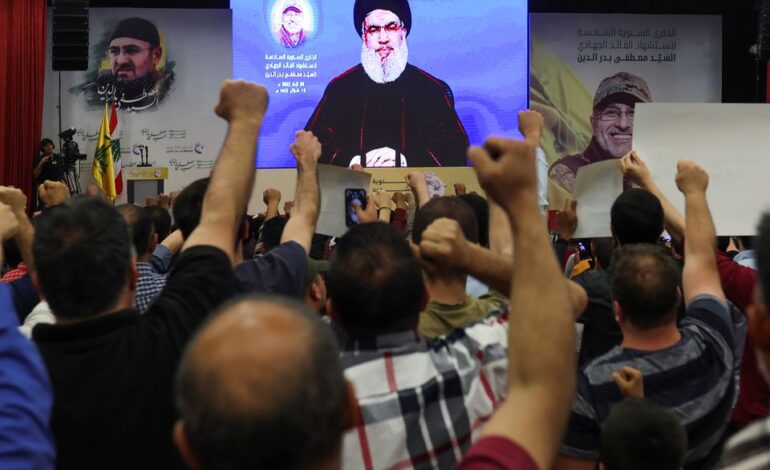 Hezbollah leader Sayyed Hassan Nasrallah had strong words on Wednesday about a maritime oil dispute between Lebanon and Israel.

Nasrallah warned that “no one” would be allowed to operate in maritime oil and gas fields if Lebanon was barred from its “rights” in extracting from areas off of its own coast.

“If Lebanon is prevented from saving itself by extracting its gas and oil, no one will be able to extract or sell gas and oil, regardless of the consequences,” Nasrallah vowed.

Lebanon is locked in U.S.-mediated negotiations with Israel to draw territorial lines across a shared maritime border that would help determine which oil and gas resources belong to which country.

Israel has already begun work at the Karish oil field through a vessel operated by London-based Energean.

The Hezbollah secretary general said in a televised speech that one of the “Resistance’s” many achievements in the July war is foiling the U.S. plan for a “new Middle East.”

“Another one of the July War’s many achievements is creating an equation of deterrence between Lebanon and the Israeli enemy,” Nasrallah said. “All the Israelis realize that Benny Gantz’s words about entering Lebanon are null and void.

“There was a U.S. project to take control of the region through direct military intervention, but the resistance and Lebanon’s resilience and the objectives of the July War dealt a heavy blow to the new Middle East project,” Nasrallah said.

He also said there are new versions of the new Middle East project and that President Biden’s visit to the Middle East this week comes in this context. 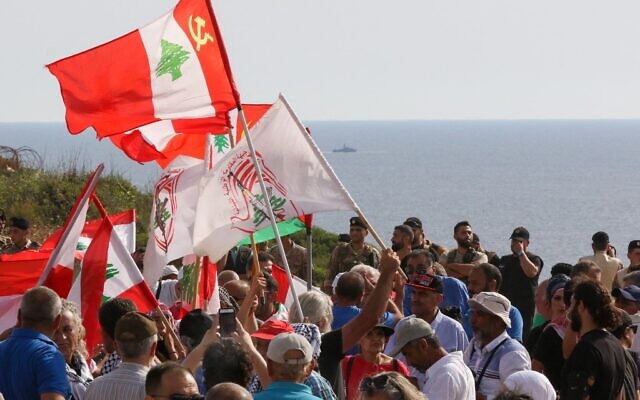 Lebanese protesters take part in a demonstration at the Lebanese southernmost border area of Naqura, on June 11, days after Israel moved a gas production vessel into an offshore field, a part of which is claimed by Lebanon. Photo: Mahmoud Zayyat/AFP

If Lebanon is prevented from saving itself by extracting its gas and oil, no one will be able to extract or sell gas and oil, regardless of the consequences. — Sayyed Hassan Nasrallah

On July 2, Hezbollah launched three unarmed drones towards the vessel, which Israel intercepted.

Nasrallah noted that the drones were launched after a clear answer from the U.S. that exhibited that it was stalling and trying to buy time.

Hezbollah, he said, meant to send three reconnaissance UAVs to be downed by the Israelis.

“For the first time in the history of the Israeli entity, three drones were launched toward it simultaneously and toward one objective,” he said.

Nasrallah hinted at further attacks, saying his group has military capacities on land, in the air and at sea, and could deploy a “large number” of weaponized drones simultaneously.

“The point of launching the drones was to send a message that we are serious and will escalate our actions gradually, and this message was understood by the Americans and the Israelis,” he added.

He added that if things reach a dead-end, Hezbollah plans to infiltrate beyond the Karish oil field.

Nasrallah said the Israeli occupation in Palestine has a weak point and that its need for gas and oil stand in contrast with Lebanon’s strong point, which is its ability to sabotage (the occupation’s plans).

“The resistance is the only strong point that you (the Lebanese officials) have in the demarcation negotiations,” he said. “Use it.”

“O, Lebanese people, we have reached the end of the line and we are not awaiting a consensus… we will not give up on the state,” he concluded in his speech to the Lebanese people.

—Reuters and staff. Edited for style.