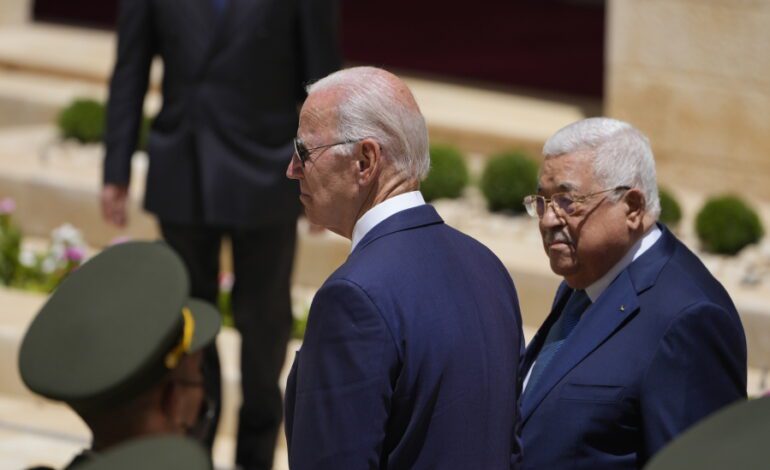 President Biden and Palestinian President Mahmoud Abbas at a welcoming ceremony prior to their meeting in the West Bank town of Bethlehem, Friday, July 15, 2022. Photo: Majdi Mohammed/AP

To judge U.S. President Biden’s recent visit to Israel and Palestine as a “failure” in terms of activating the dormant “peace process” is simply a misnomer. For this statement to be accurate, Washington would have had to indicate even a nominal desire to push for negotiations between the Israeli government and the Palestinian leadership.

Political and diplomatic platitudes aside, the current American administration has done the exact opposite as indicated in Biden’s words and actions. Alleging that the U.S. commitment to a two-state solution “has not changed”, Biden dismissed his administration’s interest in trying to achieve such a goal by declaring that the “ground is not ripe” for negotiations.

Considering that the Palestinian Authority of Mahmoud Abbas has repeatedly announced its readiness to return to negotiations, one can only assume that the process is being stalled due to Israel’s intransigence. Indeed, none of Israel’s top leaders or major parties  champion negotiations, or the so-called peace process, as a strategic objective.

However, Israel is not the only party to blame. The Americans, too, have made it clear that they moved on from that political sham altogether, one which they have invented and sustained for decades. In fact, the final nail in the “negotiating solution” coffin was hammered by the Trump administration, which has simply backed every Israeli claim, thus shunning all rightful Palestinian demands.

The Biden administration has been habitually blamed by Palestinians, Arabs and progressive voices within the Democratic Party for failing to reverse Trump’s prejudiced moves in favor of Israel: For example, moving the U.S. Embassy from Tel Aviv to Jerusalem, shutting down the U.S. consulate in East Jerusalem, accepting the unfounded Israeli claims regarding its jurisdiction over illegal Jewish settlements built over occupied Palestinian land and so on.

Even if one assumes that the Biden administration is capable of reversing some or all of Trump’s unlawful actions, what good would that be in the greater scheme of things? Washington was, and remains, Israel’s greatest benefactor, funding its military occupation of Palestine with an annual gift of $4 billion, in addition to many other schemes, including a massive and growing budget allocated for Israel’s Iron Dome alone.

As horrific as Trump’s years were in terms of undermining a just resolution to the Israeli occupation of Palestine, Biden’s policies are but a continuation of an existing pro-Israel American legacy that surpasses that of Trump by decades.

As for Israel, the “peace process” has served its purpose, which explains the infamous declaration by the CEO of the Jewish settlement council in the occupied West Bank, known as Yesha, in 2018, “I don’t want to brag that we’ve won. (…) Others would say it appears that we’re winning.”

However, Israel’s supposed “victory” following three decades of a fraudulent “peace process” cannot be credited to Trump alone. Biden and other top U.S. officials have also been quite useful. While it is widely understood that U.S. politicians support Israel out of sheer interest, for example, the need to appease the influential pro-Israel lobby in Washington D.C., Biden’s support for Israel stems from an ideological foundation. The U.S. president was hardly bashful when he repeated, upon his arrival at Israel’s Ben Gurion airport on July 13, his famous statement, “You need not be a Jew to be Zionist.” 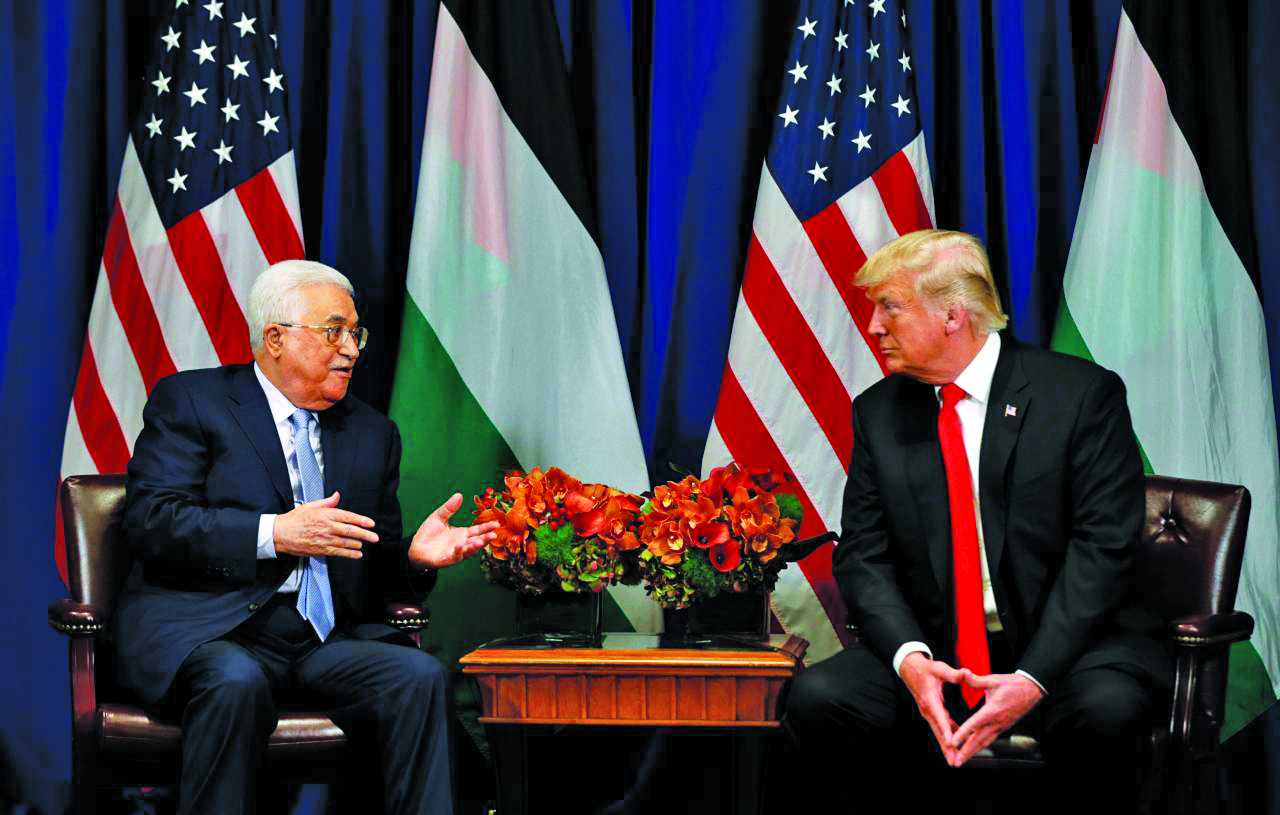 Even if one assumes that the Biden administration is capable of reversing some or all of Trump’s unlawful actions, what good would that be in the greater scheme of things? Washington was, and remains, Israel’s greatest benefactor, funding its military occupation of Palestine with an annual gift of $4 billion, in addition to many other schemes, including a massive and growing budget allocated for Israel’s Iron Dome alone.

Consequently, it may appear puzzling to hear Palestinian officials call on the U.S. — and Biden, specifically — to pressure Tel Aviv to end its 55-year occupation of East Jerusalem, the West Bank and Gaza.

Mohannad al-Aklouk, the Palestinian representative at the Arab League, for example, repeated the same cliched and unrealistic language of expecting the U.S. to “exert practical pressure on Israel”, “set the stage for a fair political process based on international law” and “meet its role as a fair sponsor of the peace process.” Strangely, Mr. al-Aklouk truly believes that Washington, with its dismal track record of pro-Israeli bias, can possibly be the savior of the Palestinians.

Another Palestinian official told The New Arab that PA President Abbas was “disappointed with the results of Biden’s visit”, as, apparently, the Palestinian leader “expected that the U.S. president would make progress in the peace process.” The same source continued to say that Abbas’ Authority is holding meetings with representatives from “powerful countries” to replace the U.S. as sponsors of the once U.S.-sponsored negotiations.

Abbas’ political stance is confusing. The “peace process” is, after all, an American invention. It was a unique, self-serving style of diplomacy that was formulated to ensure Israel’s priorities remain at center stage of U.S. foreign policy in the Middle East. In the Palestinian case, the “peace process” only served to entrench Israeli colonization of Palestine, while degrading, or completely sidelining, legitimate Palestinian demands. This “process” was also constructed with the aim of marginalizing international law as a political and legal frame of reference to the Israeli occupation of Palestine.

Instead of questioning the entire “peace process” apparatus and apologizing for the strategic plunders of pursuing American mirages at the expense of Palestinian rights, the Palestinian Authority is still desperately clutching on to the same old fantasy, even when the U.S., along with Israel, have abandoned their own political farce.

Even if, supposedly, China, Russia or India would agree to be the new sponsors of the “peace process”, there is no reason for Tel Aviv to engage in future negotiations when it is able to achieve its colonial objectives with full American support. Moreover, none of these countries have, for now, much leverage over Israel, therefore are unable to sustain any kind of meaningful pressure on Tel Aviv to respect international law.

Yet, the PA is still holding on, simply because the “peace process” proved greatly beneficial in terms of funds, power and prestige enjoyed by a small but powerful class of Palestinians that was largely formulated after the Oslo Accords in 1993.

It is time for Palestinians to stop investing their political capital in the Biden administration or any other administration. What they need is not a new “powerful” sponsor of the “peace process”, but a grassroots-based struggle for freedom and liberation starting at home, one that galvanizes the energies of the Palestinian people themselves. Alas, this new paradigm cannot be achieved when the priorities of the Palestinian leadership remain fixated on the handouts and political validation of Washington and its Western allies.