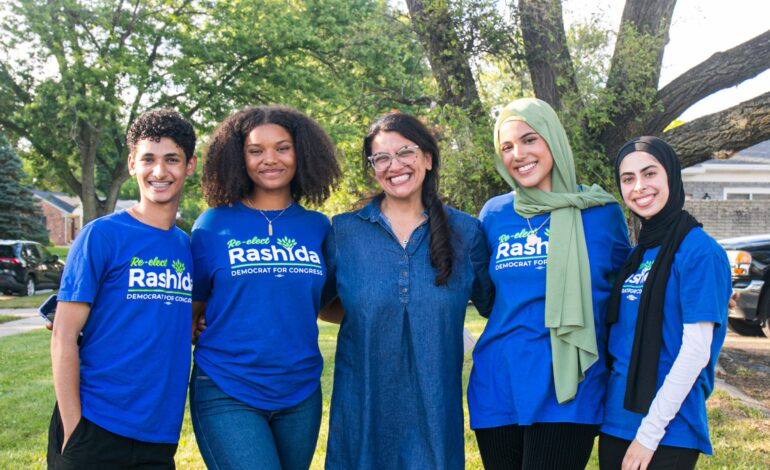 Incumbent U.S. Rep. Rashida Tlaib (D-Detroit) is running in a well-publicized primary election for the newly-drawn District 12, which includes Dearborn, most of Dearborn Heights, western Detroit neighborhoods and some new communities to the north.

Though she faces competition from hopefuls from the local Democratic political world, Tlaib has a wide lead in terms of financing, raising some $2.8 million since last year. 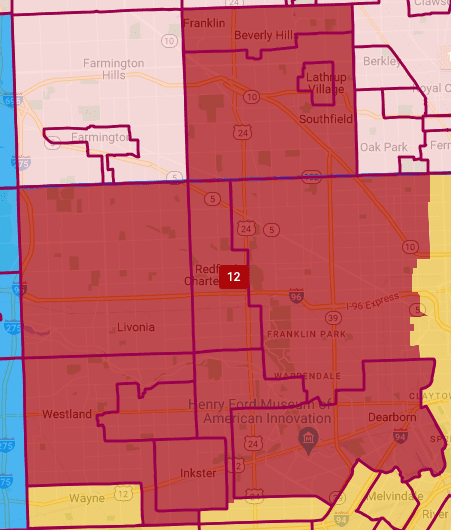 One of her opponents on the Democratic ballot, Detroit City Clerk Janice Winfrey, is seeing campaign support from pro-corporate and pro-Israeli occupation sources that have pledged upwards of $1 million on ads to help her unseat the Palestinian American Tlaib.

Tlaib can safely rely on support from voters amenable to platforms espoused by “progressive” Democrats, like fellow members of the congressional “Squad” who rallied for her at a fundraising event in Detroit last weekend.

Against a backdrop of dark money attacks against two popular incumbents, Vermont Senator Bernie Sanders was showed support for both Tlaib and U.S. Rep. Andy Levin (D-Bloomfield Township), who is running for the newly-drawn 11th District, at a rally in Pontiac last Friday.

Besides the potential to represent historic cities outside of her current district like Southfield and Livonia, the 2022 election is significant in that Arab American-concentrated communities in Dearborn and Dearborn Heights now have a chance of electing one of their own to represent them in the U.S. Congress.

“I grew up in southwest Detroit, which always touched different, beautifully diverse communities, predominantly Latino and Black, as well as second-generation people from Poland and Hungry,” Tlaib told The Arab American News this week. “Of course my grandmother is from the Southend of Dearborn. My mother finally gets to vote for me, being a Dearborn resident now.” 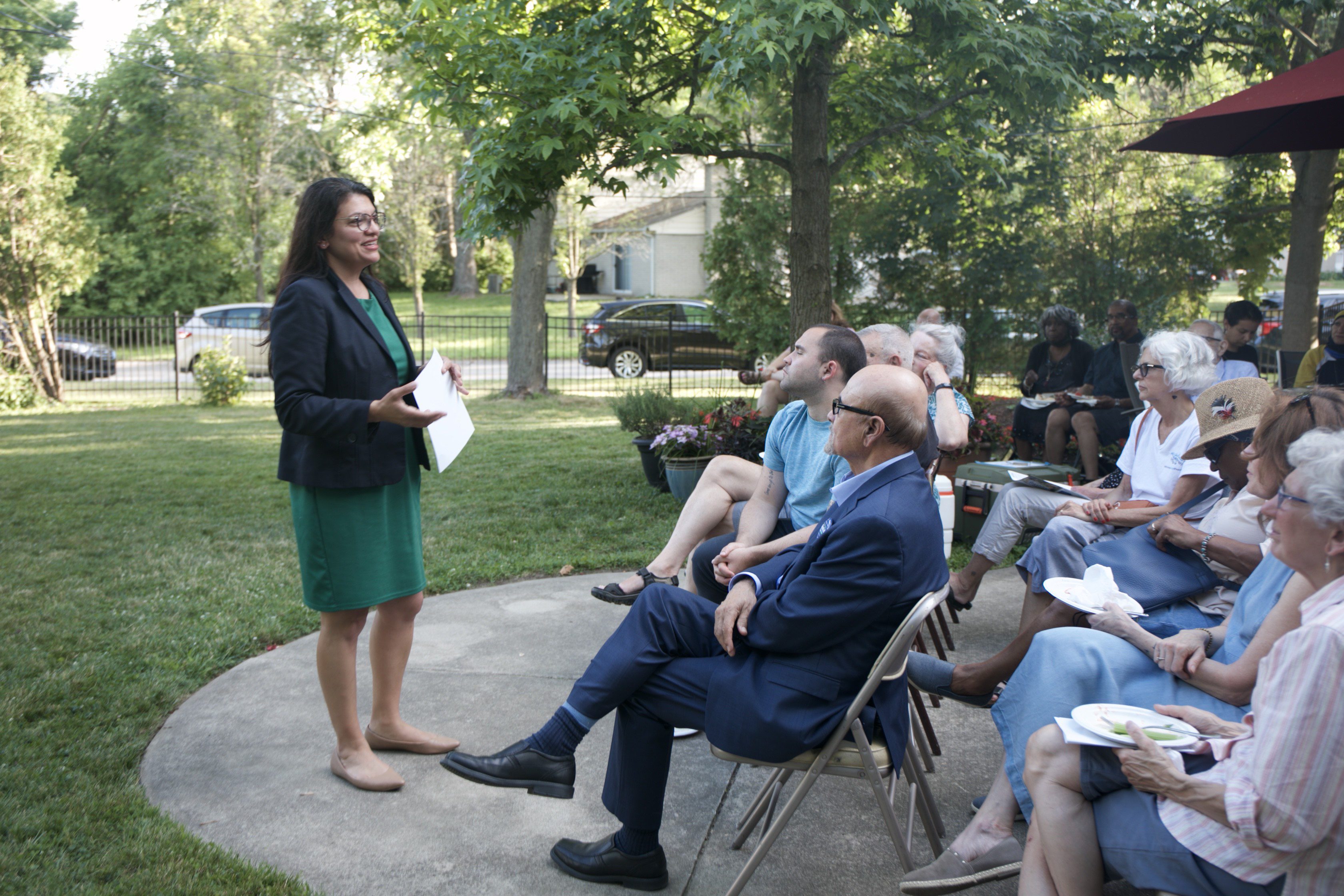 Tlaib said that much of the work she started while representing southwest Detroit will be issues of importance to Dearborn residents, but her upbringing will also be a boon to the new district.

“Now they can have someone that understands the lived experience of being Arab and being Muslim in America, also raising two Muslim boys in America, someone that has seen her own family impacted by the erasure of civil liberties, having a sister on the no-fly list, the fact that I’ve had Palestinian immigrant parents — it’s all incredibly important,” Tlaib said.

Tlaib said she always envied the confidence young people had about their identity in neighboring Dearborn, a city she called a “special place”, but is grateful for her own childhood attending predominantly Black schools.

But Tlaib is no stranger to issues affecting working class Arab families in her own current district, like the Yemeni American families in the McGraw/Lonyo area and new Iraqi American residents in Warrendale. She also currently represents a part of Dearborn Heights.

Her current district covers Wayne County neighborhoods along the heavily industrialized Rouge River area, which have seen decades of pollution that has created a sustained public health crisis.

Tlaib said she was intentional about bringing former presidential candidates Senator (Elizabeth) Warren and Sanders to the Southend of Dearborn, to show them how the area’s air monitor detects the worst air quality in the state of Michigan.

“Many of our working class communities are the target of corporate pollution and I’m a person that has taken them on,” Tlaib said. “From being an attorney that has filed an injunction against those that have literally dumped petroleum coke that can cause cancer, to introducing bills like Environmental Justice for All, voters can have faith that I don’t take money from people that are poisoning them.”

The Urban Empowerment Action PAC supporting Winfrey is funded by wealthy New York-based hedge fund founder Daniel Loeb, an investor in Marathon Oil, one of the worst polluters in the area.

Tlaib launched an investigation into Marathon Oil for its role in funding front groups and lobbying to weaken vehicles’ fuel economy and greenhouse gas emissions standards. 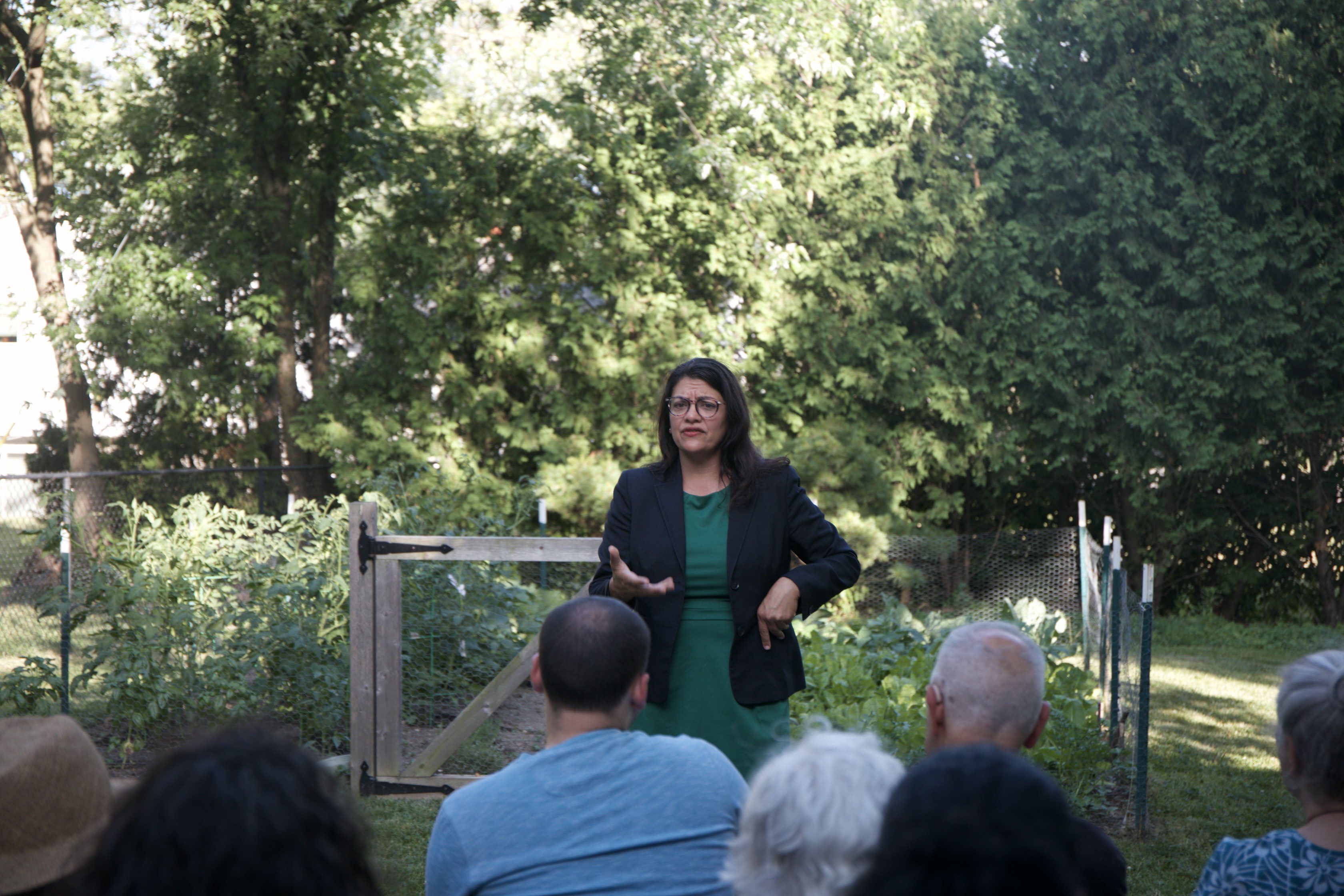 Many of our working class communities are the target of corporate pollution and I’m a person that has taken them on… voters can have faith that I don’t take money from people that are poisoning them. — U.S. Rep. Rashida Tlaib (D-Detroit)

Other in-district highlights, or receipts, touted by the Tlaib campaign include creating four Neighborhood Service Centers throughout her district that assist thousands of residents with constituent services, including supporting residents with utility and water payments, ensuring residents applied for FEMA assistance after 2021’s flooding, and advocacy on landlord/tenant issues and legal services.

During the pandemic, Tlaib helped ensure that her district was included in the latest CDC eviction moratorium.

Tlaib has also consistently shown up for immigrant and ethnic families struggling from the unfair criminal justice and immigration practices.

She said voters in the newly-drawn district are becoming increasingly frustrated by attack ads funded by outside, pro-corporate money.

“My residents know I’m not going to sell them out to those that profit from our broken health care system, from environmental injustices,” Tlaib said. “On August 2, folks will see that what we’ve been able to do in these last almost four years is incredibly popular and very much supported by our residents. They know how important it is to move with urgency and being unwavering and understanding that other people’s oppression is connected to ours.”