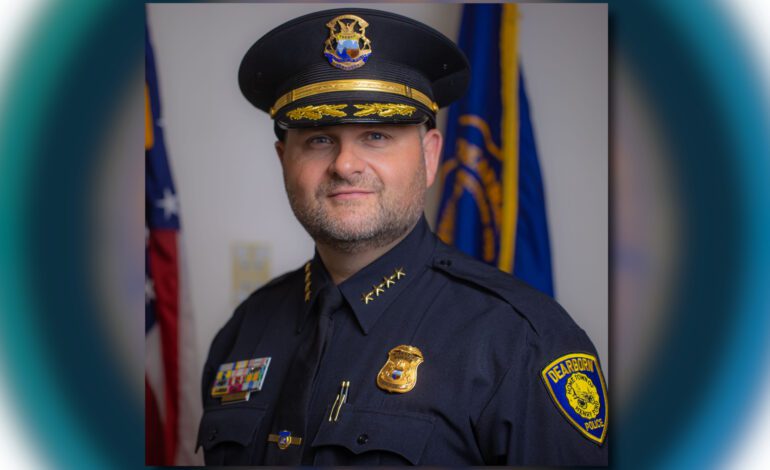 Shahin was was nominated for the position by the Michigan Association of Chiefs of Police (MACP). His term commences Aug. 25 and expires Dec. 31.

“I’m deeply humbled to have been selected to serve on this body, which carries a tremendous responsibility to the profession and to the people of Michigan,” Shahin stated. “I want to thank Governor Whitmer for entrusting me with that responsibility, and I’m honored to have received the nomination of the Michigan Association of Chiefs of Police (MACP).”

“I’m incredibly proud that Chief Shahin’s lifetime of exceptional service in Dearborn will be used to serve the broader Michigan community as part of MCOLES, and I commend Governor Whitmer for recognizing his leadership through this appointment,” Dearborn Mayor Abdullah Hammoud stated.

The city of Dearborn said in a press release that as MCOLES commissioner, Shahin will help shape the contours of the law enforcement profession statewide, setting standards on everything from selection and employment to licensing and funding.

The state says the commission has a “statutory responsibility to promote public safety in Michigan.”

“I look forward to the hard work of enhancing the profession I love through thoughtful collaboration with the other commissioners and the public we serve,” Shahin added. “Getting to work with the men and women of the Dearborn Police Department has been the honor of my life, and I’m eager to bring their perspectives along with my own to the commission table.”

Chief Shahin is a 24-year veteran of the Dearborn Police Department, the fourth largest police department in the State of Michigan. Prior to serving as Chief, he served as Commanding Officer of the Investigative Division. Prior, he served as a Captain in the Investigative and Patrol Division and as a Lieutenant in Critical Incident and Community Support. Between 2009 and 2013, Shahin served as a Sergeant in the Tactical Patrol Unit and as an ATF task force officer.

He holds a Bachelor of Science in Political Science and a Master of Science in Homeland Security and Emergency Management from Eastern Michigan University.

This appointment is subject to the advice and consent of the State Senate.