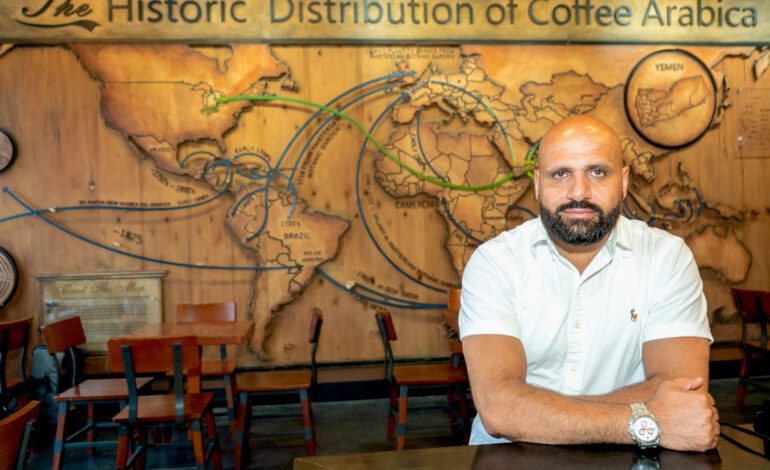 Qahwah House owner Ibrahim Alhasbani sits in front of one of the walls inside of Qahwah House's west Dearborn location. The wall has a large map that displays the historical coffee distribution throughout the world. Photo: Imad Mohamad/The Arab American News

DEARBORN — Qahwah House, the famous Yemeni coffee shop located in Dearborn, has plans to expand to other states and has a mission to bring people together through its authentic coffee.

Qahwah House owner Ibrahim Alhasbani shared his goals for the coffee shop’s future and why he was inspired to bring this coffee business to life.

Alhasbani moved to the United States from Yemen in 2011. He first moved to New York, then to Michigan in 2016.

He opened his first Qahwah House location in Dearborn on Schaefer Road in 2017.

The second location is on Michigan Avenue in the heart of West Dearborn. He also has a Qahwah House in New York and another one in Illinois.

“This is the way I want to bring everyone together, I want to build a bridge between different cultures,” Alhasbani said.

He told The Arab American News that his goal is to showcase the beauty of Yemen and Yemeni culture while also being a space for different cultures to connect.

Alhasbani’s family owns coffee farms in Yemen, so he grew up with Yemeni coffee as an important part of his life, and he strives to share that significant piece of his culture with other cultures.

This is the way I want to bring everyone together, I want to build a bridge between different cultures. – Ibrahim Alhasbani, Qahwah House

The history of coffee can be traced back to Yemen, specifically the Mocha port where coffee was exported to different parts of the world. This port city is on the Red Sea and would be used to export the rich coffee grown in Yemen.

Qahwah House imports the coffee beans from his family’s coffee farms in Yemen, so customers are getting 100 percent rich Yemeni coffee.

Alhasbani said that after moving to America, he noticed that the coffee here had a different taste compared to the coffee in his home country.

“I came to the United States and I see a lot of people who love coffee, and they drink coffee, so when I started drinking coffee here it didn’t taste the same as what I drank back home, (it had a) different style, different taste,” Alhasbani said.

He said this was a part of his inspiration to open Qahwah House: To offer people rich and high-quality Yemeni coffee.

“I see we bring a lot of people together in one place from different cultures and they know more about our culture, our coffee, our history and they share with everyone,” he said.

Alhasbani said their best sellers are the mofawar, the adeni tea and the Yemeni latte.

“People have to try something different every time so they know what’s going to work with them best,” he said when recommending menu items.

His expansion goals are coming to life with two new locations opening next month and about 20 new locations to be open around the United States by the end of next year.

(People) use the five senses so they can know more about Yemen. So it’s not just coffee; we bring Yemeni food, Yemeni music, Yemeni dance and a Yemeni fashion show.

“People come and feel it and see it and touch it and smell it. They use the five senses so they can know more about Yemen. So it’s not just coffee; we bring Yemeni food, Yemeni music, Yemeni dance and a Yemeni fashion show.”

Through rich and delicious coffee, Qahwah House has connected people with different backgrounds, different cultures and different lives. It is a place people gather with one common love: The love of coffee.

Visit Qahwahhouse.com to learn more about the business and to purchase its various products.