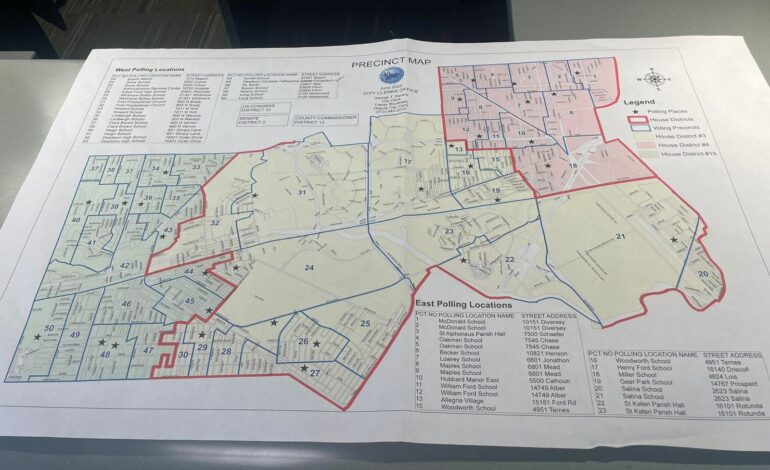 A precinct map of the city of Dearborn on Election Day in Dearborn, Nov. 8. Photo: Bilal Salman/The Arab American News

Democrats cleared victories with wide margins despite a renewed push by Republicans to make in-roads with voters, with the picture becoming clearer as election results came out of the Dearborn Clerk’s office Tuesday night.

With all precincts reporting in Dearborn, unofficial results from the Dearborn City Clerk showed comfortable wins for Democrats in key seats. The victories reflected those for Democrats for state and county positions, like the governor, secretary of state and attorney general and representatives, even the three ballot proposals.

All three statewide proposals won comfortably in Dearborn, with Proposal 3, a proposal to enshrine abortion rights in the state’s constitution, having the slimmest margin (59 to 40 percent).

Full results can be found on the city of Dearborn website at cityofdearborn.org

Dixon, Karamo, DePerno and Republican operatives converged on Dearborn in the run-up to the election and even found favor with some Arab Americans as they looked to capitalize on a recent school library issue.

Republicans also attempted to appeal to some Muslim voters’ hesitation around Proposal 3, which would enshrine abortion and contraception rights into the state’s constitution and block a 1931 law that would have criminalized abortions in all circumstances, including rape. Informational pamphlets ahead of the elections claimed the proposal would supersede parental rights, even age of consent, a claim local prosecutors debunked. Proposal 3 passed 57 to 43 percent.

At Dearborn School Board meetings, protesters came in droves to demand the city virtually ban books with explicit content around sexuality and those that cater to the LGBTQ + community or openly discussed gender and sex. Many of those protesters blamed local Arab American Democrats for not having their back on those issues and had promised to switch their support in droves.

The final results did not reflect such a shift in general, though individual precincts’ reports will give a better idea of how Arab American-heavy neighborhoods voted. 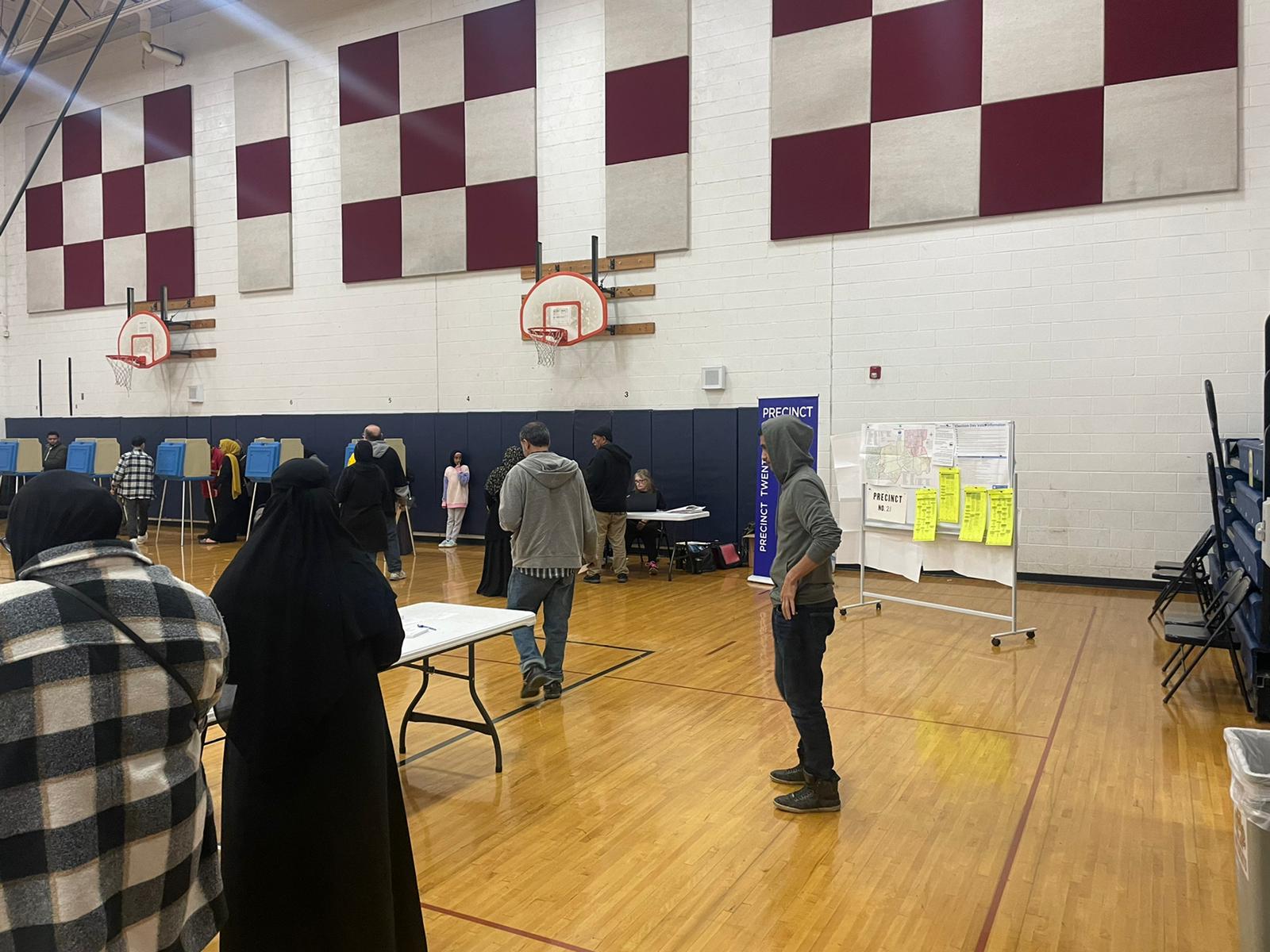 Thousands of Republican, Democratic and independent election clerks and workers securely counted ballots through the day and night to provide Michigan voters their unofficial election results as quickly as possible. — Secretary of State Jocelyn Benson

In Hamtramck, where the school book issue arrived at a board meeting on Wednesday, with a crowd that included some of the same protesters from Dearborn, chatter over social media prior to the election had also indicated a coming shift.

But Democrats still dominated the election, with a 2,490 to 644 lead over Republicans in the straight ticket category.

Whitmer won with 3,287 votes over Dixon’s 786 votes in Hamtramck, and other executive candidates performed just as well.

Aiyash is now also the next State House majority floor leader, indicating the rising impact and participation of Arab Americans in local and state politics.

Record setting turnout for the state

The Nov. 8 election was record-setting in Michigan in terms of turnout.

Though results out of Wayne County and other places were slow to come, Secretary of State Benson was happy to announce on Wednesday that nearly all unofficial results had been reported by midday, thanks to the efficient work of Michigan election clerks and workers.

By Thursday, state law requires the bipartisan board of canvassers in each of Michigan’s 83 counties to begin canvassing the unofficial results from their jurisdictions. County clerks and their staffs assist them in this process, working hand in hand with city and township clerks.

The law requires county canvassers to complete their work and certify the results by Nov. 22, and then the bipartisan Board of State Canvassers must do the same by Nov. 28. If elections require or candidates request recounts, those occur after the canvasses are complete and the election is certified.

Benson’s office reported only a few issues that arose during the day, and all were addressed quickly and without stopping voters from casting their ballots. Only two disruptive challengers were reported to the Department of State – one in Ann Arbor and one in Detroit – and after conversations, both departed the polling places without deterring any voters.

“Thousands of Republican, Democratic and independent election clerks and workers securely counted ballots through the day and night to provide Michigan voters their unofficial election results as quickly as possible,” Benson said. “In the days ahead, clerks will now tirelessly dedicate themselves to canvassing their elections to confirm their accuracy before certification, demonstrating again their commitment to the integrity of Michigan elections and our democracy.”

Election officials reported good activity on Election Day in Dearborn and Hamtramck, in a general election that could promise major party changes in state and federal seats nationwide.

Voters in Michigan were also voting on three statewide proposals that can have lasting effects in the state. One of those, Proposal 3, guarantees a constitutional right to individual decisions over pregnancy-related issues without government interference, but with some restrictions that have already been in place.

That proposal had been one of the central targets in the election battleground for Democrats and Republicans, and Arab American voters in Hamtramck and Dearborn were urged by both to make the right decision.

Volunteers for an anti-abortion and anti-Prop 3 campaign stood outside Hamtramck High School Tuesday afternoon with a sign that said the proposal is too extreme and too unclear.

A van with anti-abortion signage on large screens was also spotted in Hamtramck, Dearborn and Dearborn Heights.

The Hamtramck City Clerk’s office told The Arab American News that the city’s precincts experienced a decent turnout by late Tuesday afternoon. There were about 14,000 total registered voters in that city. Some 2,100 absentee ballots were issued to those who requested them and about 82 percent of those were returned before Election Day, with more being dropped off throughout the day.

There were 1,400 total votes being reported from Hamtramck precincts by about 4:15 p.m.

In Dearborn, some 73,500 voters are registered. Some 12,000 absentee votes were sent out before Election Day and as of Tuesday morning 10,000 were returned.

A small error in the Arab language ballot in the judicial race led to the clerk contacting all 34 voters who had requested an Arabic ballot before Election Day. Of the 11 who had submitted their ballot prior to Election Day, some redid their votes while others chose not to.

Neighborhoods in Dearborn and Dearborn Heights are now split between three different State House seats thanks to redistricting. The change diluted Arab American representation in the Detroit-heavy District 4, which includes all of Dearborn’s northeast neighborhoods. Arab American candidate Gus Tarraf lost the primary for that seat in August. Both Dearborn and Dearborn Heights fall under one State Senate and Congressional district.

Executive races in Michigan were tight, with incumbent Governor Whitmer leading only by a single point in the RealClearPolitics poll average ahead of Republican challenger Tudor Dixon on Monday.

Trump-aligned candidates in national races and in Michigan espoused previously-debunked theories of widespread election fraud in the 2020 presidential elections. Election officials braced for challenges and in some races, like in Arizona, election workers had even received threats of violence in the run-up to the election.

Dearborn and Hamtramck clerks did not hear of such threats by Tuesday evening, but Dearborn Clerk George Darany did note some overzealous election watchers who “overstepped their boundaries” or were “not being civil” while they crossed polling lines to hand out materials or had to be informed that they couldn’t touch election materials like tabulators and ballots, by law.

In Detroit, Republican candidate for secretary of state Karamo filed a lawsuit before the election that asked that procedures around absentee voting be changed, claiming corruption and election law violations. That request was denied on Monday by a judge who said Karamo’s lawyers failed to produce any evidence of such violations in the regular Detroit election process.

“While it is easy to hurl accusations of violations of law and corruption, it is another matter to come forward and produce the evidence our Constitution and laws require,” said Wayne County Third Circuit Court Judge Timothy Kenny. “Plaintiffs failed, in a full day evidentiary hearing, to produce any shred of evidence.”

Locally, conflicts over school educational materials that are explicit or cater to LGBTQ+ students, combined with abortion, had produced a renewed interest among local Muslim Americans to switch their votes to Republican after a decades-long stronghold in the community enjoyed by Democrats. Posts over social media hinted at a shifting party landscape, but major Arab American political organizations did not endorse Republicans en masse.