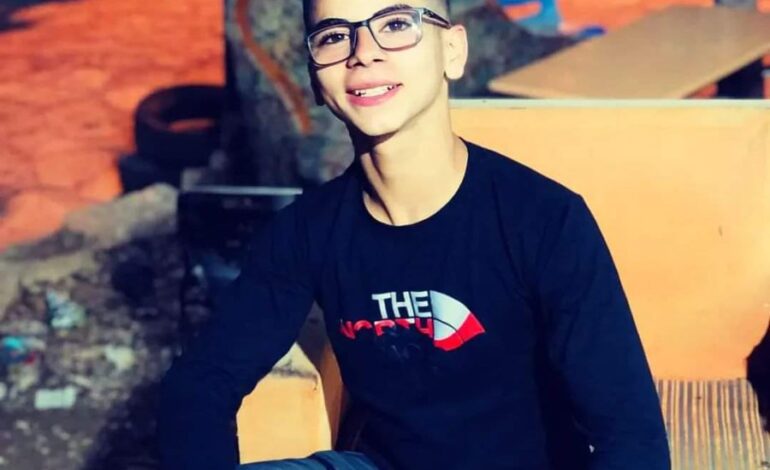 Ahmad Amjad Shehadeh, 16, died from an Israeli bullet that penetrated his heart in the city of Nablus, Palestine's Health Ministry says.

NABLUS, WEST BANK – Israeli forces shot and killed a Palestinian teenager Tuesday night during an Israeli incursion near Nablus in the occupied West Bank. Ahmad Amjad Shehada was shot during a confrontation while Israeli occupation forces secured an Israeli settler incursion at the site of Yosuf’s Tomb. Amjad was only 16-years-old.

Live ammunition hit Amjad’s chest, penetrating his heart. According to the Palestinian Ministry of Health, he was transferred to Rafidia Government hospital in Nablus, where he was pronounced dead just after midnight.

Dozens of other people were injured, including three Palestinians hit by live ammunition and one hit in the head by a sound bomb. Each of the four was taken to the hospital in Rafidia for medical treatment.

Palestinian health authorities confirmed the injury of six other Palestinians with live bullets and tens of others by suffocation.

This has been the deadliest year for children in the West Bank since the Second Intifada in 2003. Ahmad is the 37th child killed this year by Israeli fire or the result of Israeli military intervention. His death happened less than 48 hours after 17-year-old Mahmoud Al-Saadi was shot and killed in the Jenin refugee camp while walking to school.

Frequent incursions by Israeli settlers happen at Yusuf’s Tomb. This often results in confrontations between Israeli forces, Palestinian youth and armed fighters. Three other Palestinian teenagers have been killed this year by Israeli forces during confrontations following Israeli settler invasions at the tomb. Mahdi Hashash was 15, Ghaith Yamin was 16 and Waseem Khalifa was 18.

Palestinian fighters are fighting back

Following Ahmad’s death Tuesday night, the armed group The Lions’ Den released a statement saying that they are “fighting a battle” alongside the newly formed Balata Brigade in Nablus against Israeli forces.

The Al-Quds Brigades battalion in Nablus said it targeted Israeli forces in several areas Tuesday night with “heavy fire”, claiming multiple direct hits and casualties among Israeli forces. The Palestinian Red Crescent published photos of one of their ambulances that came under direct fire by the Israeli military south of Nablus in Beita. Armed confrontations around the tomb lasted until 2 a.m.

This has been the deadliest year for children in the West Bank since the Second Intifada in 2003.

2022 has been the deadliest year for Palestinians throughout the West Bank since 2005.

The Negotiation Affairs Department of the Palestine Liberation Organization published a report Wednesday morning saying, “Israel, the occupying power, continues to violate the rights of children to life, family, education, housing and health.”

The report titled, “Israeli attacks against Palestinian Children in 2022”, went on to say, “With Israel’s shoot-to-kill policy in the occupied West Bank and heavy bombardments against occupied Gaza, our children’s lives are at risk.”

The report claims that Israeli occupying forces and armed settlers arrest, abuse, injure and kill hundreds of Palestinian children every year. The children are targeted and pay a high price for the arbitrary measures of Israel’s occupation, including home arrests. They are suffering from the consequences of illegal Israeli policies, including the denial of family reunification, closures, colonial enterprise, military incursions and the Israelization of textbooks in Palestinian schools throughout East Jerusalem.

“Despite international agreements, treaties, covenants and laws, which guarantee and protect the rights of children — foremost among them is the Convention of the Rights of the Child — the occupation authorities continue to commit crimes against humanity and war crimes. Palestinian children are targeted as part of a systematic Israeli policy designed to destroy their present and future,” the NAD report said.

The report covers Israeli violations against Palestinian children from the beginning of the year through November 20. It claims that 44 children under the age of 18 have been killed by Israeli occupying forces (IOF). Israel has also been holding the bodies of 12 Palestinian children since 2015.

So far, during 2022, 336 demolition operations have been carried out by the IOF throughout Palestinian refugee camps, villages, cities and Bedouin communities. According to the UNOCHA, Israeli authorities have destroyed more than 775 Palestinian structures and more than 160 homes. Around 880 people have been displaced as a result, including 429 children. More than 2,000 children have been affected otherwise.

– Jeffrey Stevens is a contributing writer for The Arab American News