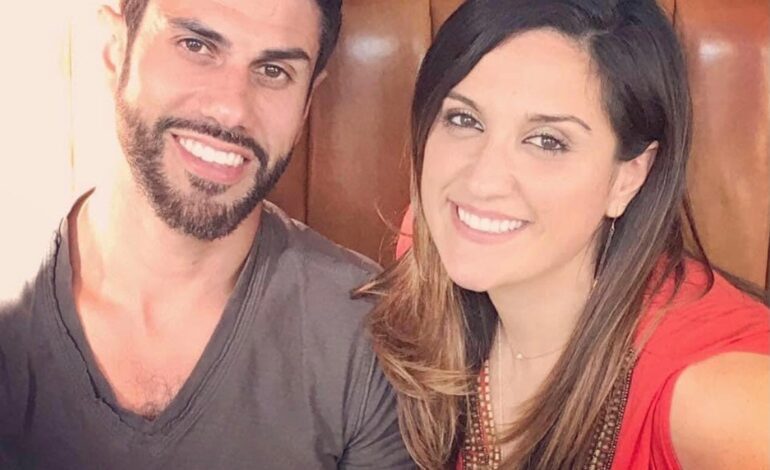 Omar Salamen and his 40-year-old wife, Manal Kadry, of Northville

A Northville couple who died in a late-night rollover crash Nov. 12 were remembered and honored in an online memorial service last Monday night.

Manal Kadry and her husband, Dr. Omar Salamen, died after their car left the road as the driver attempted to navigate a turn near their neighborhood, Northville police said. Police said the car hit a tree near Seven Mile and Napier Roads. The couple died at the scene.

On Monday night, family members and first responders gathered at the site of the crash to remember the couple. The event started at 11 p.m., around the time the crash occurred, on what would have been Kadry’s 41st birthday.

The memorial service was closed to the public, but the family decided to broadcast the event live on Facebook.

Autopsy results for Kadry, 40, and Salamen, 46, won’t be available for weeks or possibly months, said Matthew MacKenzie, a sergeant with the Northville Police Department.

The event was attended by hundreds of followers online who expressed their solidarity and sympathy with the families of the deceased couple, including their four children.

The memorial event, which was attended by local police officers and paramedics, included recitations from the Holy Quran and speakers from among the couple’s relatives. Among the speakers was Kadry’s brother, Dr. Bassam Kadry. Dr. Kadry, who launched an extensive online fundraising campaign for the children, said his late sister and her husband, “were two loving people who cared for people and listened to their concerns without prejudices”, stressing that their deaths shocked the entire community.

Kadry asked the bereaved listeners to share the story of the couple as widely as possible and asked people to donate generously to support the children. The Arab American News has learned that the two older boys are from Salamen’s previous marriage, while the two younger children are from his current marriage.

With custody of the children having passed to Salamen’s brother, Dr. Kadry’s decision to launch a fundraising campaign sparked mixed reactions among close acquaintances of the two families, due to the substantial wealth of the Kadry family. One person close to the Kadry family told The Arab American News that despite his full sympathy for the children, such a campaign may negatively affect families who are really in bad need for the donations, while the families of Kadry and Salamen are wealthy, as he put it.

By the end of the campaign, Thursday night, donations via launchgood.com had reached $615,715, with 4,785 donors having already contributed.

Salamen, of Palestinian origin, was born in Michigan and studied at the Faculty of Dentistry at the University of Michigan and completed his surgical training at Nova Southeastern University in Florida, He practiced from a medical center for oral surgery and dental implants in Dexter, near Ann Arbor. He was a board-certified surgeon by the American Association of Oral and Maxillofacial Surgeons (AAOMS) and a member of the American Academy of Oral and Maxillofacial Surgeons.

Kadry, of a Syrian origin, was also born in Michigan. She had just launched her interior design career in 2021 after 17 years working in education. In a post on Facebook in June, Kadry said she left teaching because she “wanted to watch my miracle babies grow” and pursue a passion of hers in interior design. She thanked her husband and parents for their support in her switching careers and dedicated the post to her kids.

Kadry belonged to a well known Damascus family in the field of medicine, as she is the daughter of retired doctor and a wealthy real estate investor Othman Kadry, who owns more than a dozen commercial properties in the Greater Detroit area. In addition to her brother, two of her sisters are also doctors. One of her sisters is married to a well-known doctor who practices in Dubai.