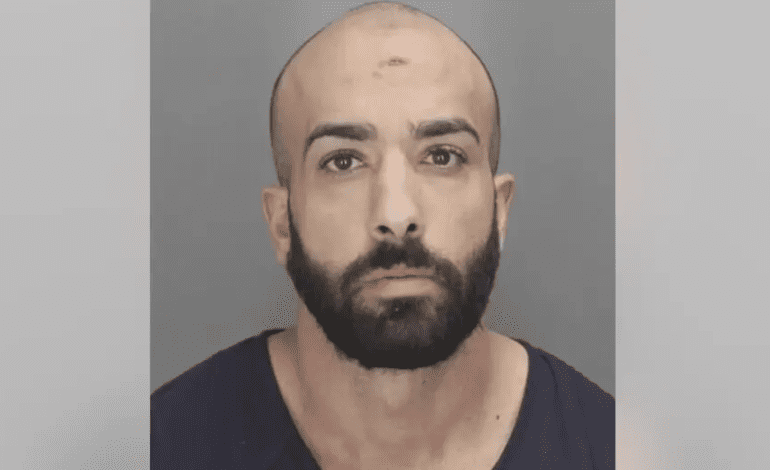 A Dearborn man charged with threatening families, kids and staff at a Bloomfield Hills synagogue and school went on a rant during his arraignment, where he insulted the judge by calling her a “Jewish bitch” and flipped off the court.

Hassan Yehia Chokr, 35, was charged with making anti-Semitic and racist threats to parents, young children and security at Temple Beth El, a preschool and synagogue in Bloomfield Hills.

On Sunday, Chokr was arraigned on the charges via video in Judge Julie Nelson-Klein’s courtroom, where he was ordered held on a $1 million bond.

As the judge was announcing terms in case he makes that bond, Chokr called her a ‘fucking Jewish bitch”, then flipped her off and said “God’s going to judge you the way you’re judging me.”

Chokr then called the judicial system bullshit and said that it would collapse.

“Your system’s going to collapse,” Chokr said. “You’re taking my freedom of speech away, my freedoms away — at the end of the day, your freedoms are going to be stripped away from you. You will not see Heaven and you will be doomed to Hell and you will see that my words are true. You go ahead and give me that harsh punishment and you will see the punishment that God’s going to give you. I’m a God-fearing man and I don’t hurt nobody. I don’t have no intent to hurt nobody. I was exercising my freedom of speech.”

Chokr was arrested on Friday after police said he made multiple threats and hate-filled rants outside of the synagogue’s daycare. When police pulled him over that day, Bloomfield Township Police Chief James Gallagher said the evidence wasn’t strong enough to merit an arrest on ethnic intimidation.

After his run in with police, Chokr posted a video of himself trying to buy a gun at a Dearborn gun store. Throughout the day on Friday, investigators kept close tabs on him while they continued to gather additional evidence.

Police uncovered that additional evidence in the form of a video that Chokr posted on his social media — intimidating parents dropping their daycare-aged children off and security guards at Temple Beth El.

Chokr was already out on a personal bond on a charge of assaulting a Detroit Police Officer in July 2020. He was due for a trial next year.

On Monday, he appeared on the 2020 assault case and exposed his backside to a Wayne County judge during a virtual emergency bond motion hearing — and his bond in Wayne County has now been revoked.

He appeared in court for a resisting arrest charge in Wayne County when he mooned Judge Regina Thomas.

The Wayne County assistant prosecutor said Chokr was out on bond when the alleged incident outside the daycare happened.

At this point Chokr — who refused to acknowledge his name earlier in the hearing and said he “pleads the fifth” — became agitated. He began yelling and pointing at the camera during the virtual hearing.

“I want the record to reflect that while the court has muted the defendant’s microphone he appears to be yelling and pointing at the camera at the Oakland County Jail,” Thomas said. “And now he has removed his pants to show the court his backside.”

Attorney Duane Johnson said he wanted to detail Chokr’s defense in the case, but the judge stopped him short, questioning the defendant’s mental state.

“You can go ahead and make a record, but he seems to be mentally ill, quite frankly,” Thomas said. “I don’t know why anyone would think it is appropriate to pull down his pants and show the court their behind during a court proceeding.”

Johnson said that a mental health evaluation “probably would be a good thing” and argued that Chokr was expressing his First Amendment rights of freedom of speech.

“We are free to say whatever we want to say, but we are not free from the consequences,” Thomas said.

“So if we are doing things that are unsafe and we are infringing on other people’s rights, we don’t get to do and say anything we want to without the consequences of those actions. That’s where your client finds himself today.

“He exercised his right and I am exercising my right to give him a consequence for that. Nothing that any of us do in this life is without consequence.”

The judge spoke about Chokr allegedly going to private property where he harassed women and children, adding the court had concerns about him being in the community.

Chokr family speaks out, apologizes to the community, calls for a better mental health support

Hussein Chokr told CBS Detroit that his family felt compelled to speak up after his brother was arrested and charged with the alleged ethnic intimidation incident outside of Temple Beth El.

He said he felt horrible about what happened.

“On behalf of my community and my family, we would like to apologize to the Jewish community and Temple Beth El for what my brother has done,” he said.

He said what his brother did was wrong and also said his brother is suffering from mental health issues.  He said he hopes his brother gets the help he needs and is not just thrown in jail.

While Hussein Chokr and his family wait to see what happens to his brother legally speaking, they planned a visit to Temple Beth El to make a donation and apologize in person.

Meanwhile, he is hoping to bring awareness to his brother’s mental health struggles and has this message for his sibling.

“Brother, I love you infinitely, I’ll always be there for you no matter what, up or down, I’ll pray for you,” he said.

Hussein Chokr also added that changes are desperately needed to address those with mental health issues and help them get better.

He said he believes there isn’t enough support for those struggling with mental health, because the only options for treatment seems to be  putting people in jail.

“Because this is a thing and not a lot of people believe it,” he said. “A lot of us go through hardship and we say nothing is wrong with us and we neglect it because we fear the stigma that I may have a mental health problem. No, it’s OK. At some point everyone goes through a mental health crisis.”