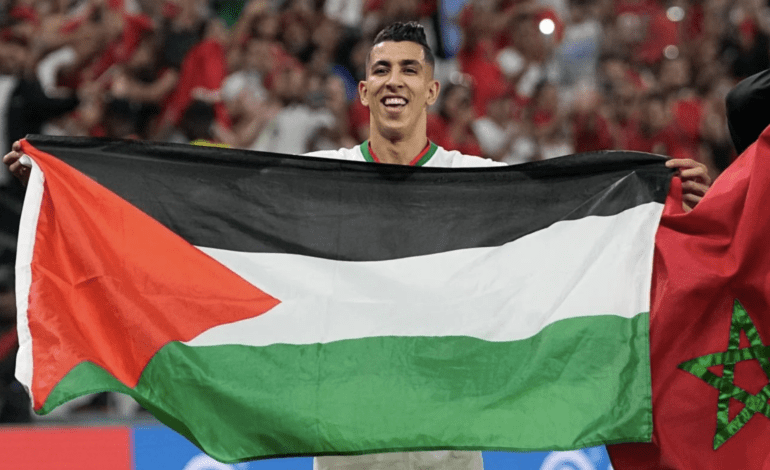 Morocco's Jawad El Yamiq raises the Palestinian flag after the World Cup soccer match between Canada and Morocco at the Al Thumama Stadium in Doha on Dec. 1.

We were mistaken to think that Palestine represents the central issue for all Arabs. Such language suggests that Palestine is an external subject, to be compared to other collective struggles that consume most Arabs, everywhere. The ongoing celebration of Palestine and the Palestinian flag at the Qatar World Cup 2022 by millions of Arab fans compels us to rethink our earlier assumptions about the Arab people’s relationship with Palestine.

The starting point to my argument is Rome, Italy, not Doha, Qatar. In August 2021, I attended a friendly football match between Morocco’s Raja Casablanca and the Italian AS Roma. Thousands of Moroccan fans accompanied their team. Although fewer in numbers, their matching outfits, songs, chants and group dances in the stands made them more visible than the rest.

Although the environment of the game had little or no political context, the Moroccans sang for Palestine and wore Palestinian kuffiyas draped with the colors of the Palestinian flag. It was a heartwarming gesture, typical of Arab fans at football matches. As the fans began leaving the stadium in larger numbers, I realized that the very fan culture of Raja Casablanca was modeled entirely around Palestine. Their main slogan is Rajawi Filistini — Palestinian Rajawis, the words embroidered on their sports jerseys.

Considering the absence of political context to that specific match, clearly the Moroccans did not see Palestine as a message to be communicated using sports as a platform, but have internalized it to the extent that it became an integral part of their everyday reality. When I asked a group of Moroccan fans on why they embrace Palestinian symbols and chants, the question puzzled them. “Palestine is in our blood. The love for Palestine runs in our veins,” an older man answered, overcome with emotions.

Multiple studies have been conducted to gauge Arab public opinion in recent years about the importance of Palestine, most notably the Arab Opinion Index survey conducted by the Arab Center for Research and Policy Studies in 2020. This poll found that 85 percent of respondents opposed normalization with Israel. Indeed, the Arab people remain clear on their allegiance to the Palestinian struggle for freedom. No Arab country deviated from this rule, from the Arabian Peninsula to North Africa.

The Qatar World Cup, however, raises new questions, not about the centrality of Palestine to Arab political consciousness, but whether the representations of Palestine are merely political and whether Palestine is just another “issue” to be juxtaposed with other urgent Arab issues and causes.

Even the Israelis, with their much-touted intelligence agencies and supposedly good grasp on the mood of the so-called “Arab street”, seemed confused and even angry as they rushed to Qatar to report on the World Cup, but also to use the international sports event as a way to translate diplomatic recognition and political normalizations into popular acceptance.

However, the two Israeli reporters, Raz Shechnik and Oz Mualem, returned to Israel disappointed. Failing to connect the dots between Israel’s apartheid and military occupation in Palestine, the Yedioth Ahronot journalists have reached this convenient conclusion: “Despite believing, as open-minded liberals we are, that the conflict with the Arab world is between governments and not the people, Qatar has taught us that hate exists first and foremost in the mind of the man on the street.”

Not only did the “open-minded liberals” lack any sense of self-awareness, they, like most Israelis, had completely dismissed the Arab people as political actors, capable of thinking and behaving according to their own collective priorities. Moreover, they also confused the Arabs’ justifiable anger for the terrible injustices inflicted by Israelis on the Palestinians for random “hate” that seems to simply reflect the supposed hateful nature of the Arabs.

If the two reporters reflected on their own reporting with a truly — not self-proclaimed — “open mind”, they would have found some clues. “Whenever we report, we are being followed at all times by Palestinians, Iranians, Qataris, Moroccans, Jordanians, Syrians, Egyptians and Lebanese… all giving us looks full of hate,” they wrote.

Considering the deep political divisions that presently exist among Arab nations, one wonders why ordinary people from vastly diverse Arab and Middle Eastern nations are united in “hating” Israel and loving Palestine. The answer does not lie in the word “anti-Semitism”, but in representations.

Palestinians, on the other hand, represent something else entirely. They embody the unhealed wound of all Arabs. Courage and sacrifice. Refusal to surrender. Resistance. Hope.

Most Israelis are unable to grasp the organic relationship between Arabs and Palestine simply because they refuse to accept that their country summons such negative feelings. Contending with this reality would mean deep and uncomfortable reflections. The likes of Shechnik and Mualem would rather explain such a complex task through some convenient references about inexplicable and unjustifiable Arab “hate” of Israel.

The Arab embrace of Palestine is not only about Israel, but also about the Arabs themselves. Though the Palestinian flag was itself inspired by the pan-Arab flag of 1916, it has morphed, over the years, to serve the role of the unifying Arab symbol.

The fact that Arab football fans in Qatar have spontaneously chosen, without any official instructions or government intervention, to use the Palestinian flag as their symbol of unity speaks volumes about Palestine’s position in the collective Arab consciousness. It also tells us that the love for Palestine is not a direct outcome of hating Israel, nor is it that the Arabs view Palestine as a symbol of defeat or humiliation.

When Moroccan player Jawad El Yamiq celebrated his country’s national team’s victory over Canada on December 1, thus guaranteeing the advancement of Morocco to the knockout stages of the World Cup, he raised a Palestinian flag. In the background, Moroccan fans were chanting for Palestine and Morocco. For them, Palestine is not an external cause, and their cheers are not simply an act of solidarity. For them, Palestine and Morocco are synonymous, describing the same collective experience of defeat, struggle and, ultimately, victory.