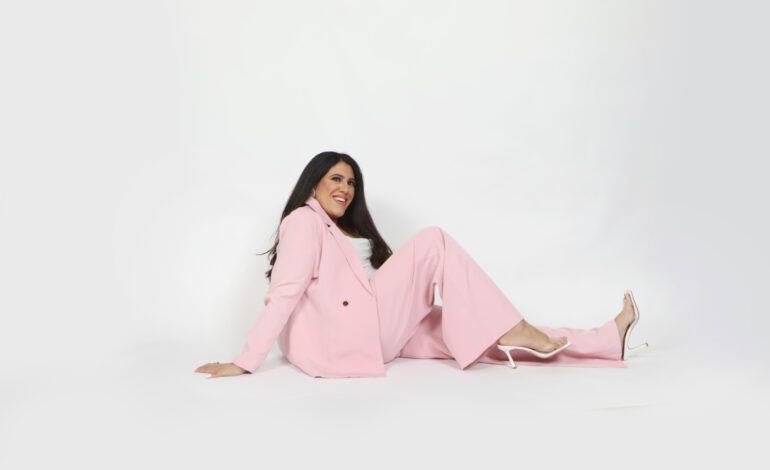 — This article was contributed by Sarah Moosazadeh, special to The Arab American News

A pair of reading glasses, headscarf and a dose of Middle Eastern humor are all traits Assyrian American comedian and influencer Ramina Odicho uses to post comedic TikTok clips that depict her Assyrian roots and build ties with other ethnicities.

With more than 210,000 followers on TikTok and 32,000 on Instagram, Odicho is perhaps one of the top social media influencers in the Assyrian diaspora. Her most iconic clip of her dancing to Hussein Al Jasmi’s — Bel Bont el Aree, in her mom’s kitchen, is nostalgic for many Middle Easterners who claim the scenario is familiar to their own cultural upbringing. Since its debut the post has garnered thousands of likes from Albanians, Russians and Iranians, Odicho said in a Zoom interview, earlier this year.

“What I’ve found is that by posting these videos, specifically on TikTok, because it reaches such a broad and diverse audience, people are learning about our culture, not only learning but also relating to it,” she said.

What makes Odicho’s account unique, however, is her ability to address social and cultural stigmas that many people in Middle Eastern cultures are afraid to discuss or address. Her popular TikTok persona, Yome, who is inspired by the typical Middle Eastern mother and her grandmother, has become a universal mom to many, she says, because of her old-school mentality and references to double standards common in Middle Eastern homes.

“I love my culture,” she said. “I don’t want people to think that I am mocking it or making us seem that we are backwards, but my comedy does shine a light on maybe the more harmful aspects of our culture; and if a change comes about because of that then I think that is a wonderful consequence of doing what I love, which is making people laugh.

“I don’t think that my content is breaking cultural taboos,” she added. “I think that it is shining a light on some of our silly cultural nuances. Taboos are a result of people being afraid or shying away from certain topics and my comedy happens to create a space where people can engage in conversation about these topics.”

Unlike some Middle Eastern influencers, Odicho doesn’t use her platform to advocate for different social issues, but focuses on cultural experiences and stories instead.

“I love making people laugh and I think that my videos have allowed many Middle Easterners, specifically Assyrians, to finally see themselves represented and feel seen,” she said. “We are such a marginalized people and I feel like that has been the most humbling experience for me.”

Odicho said she also draws her inspiration from other Arab American and Iranian American TikTok influencers such as stand-up comedian Nemma Naz, who uses his platform to share comedic content about his Canadian and Iranian background.

“I think TikTok has allowed many people to connect in ways that they might not have an opportunity to do so,” she said.

Similar to other influencers, Odicho said she also struggles to produce content that will constantly entertain and attract both new and old followers.

“I think I am my toughest critic and I sometimes won’t post videos because I think they are not good enough or not funny but my family is like, ‘are you out of your mind, post it, it’s hilarious’ and sure enough it gets great reviews. I’ve just decided you know what’ whatever comes to mind I’m going to create it. I’m going to post it and if one person connects to it, then that’s all that matters and that’s success to me,” she said.

Odicho mentioned that she wasn’t a fan of TikTok when it launched and had a hard time understanding why her cousins were scrolling on their phones, watching dances she thought were cringy. When the pandemic hit, however, she became curious about the app and decided to download it.

I am proud of our language, our customs, dances, our rich history, our food and our churches who have done such a good job of preserving our Assyrian roots and our identities. We are a people in the diaspora; we don’t have a country and I think it’s because of that, that it’s so important to hold on to who we are. That is the beautiful aspect of it.

“I realized that they were more than just dancing videos; they’re filters and certain effects on there you can play with and I figured this is really cool for recording quick short videos, editing them and then posting.”

The thought of performing stand-up comedy did cross her mind. However, the idea of standing in front of a live audience was also scary, she said. Yet, earlier this year Odicho, who has a master’s in English language Learning and Reading, quit her job as a high school English teacher to pursue comedy full-time.

Since her decision, she has performed at numerous venues across the U.S. and is scheduled for a live performance on March 16, 17 and 19 at the Bryan Brown theater in Sydney, Australia as well as the Town Hall Broadmeadows in Melbourne on March 24.

“At first, I was terrified,” she said. “It’s one thing to record videos and edit them, but to stand up in front of a room full of hundreds of people and perform on the spot is another story. I know I’m funny, but I always find myself praying that the vibe is right and people will love the show. So far, I’ve gotten amazing reactions about the live shows; I get to meet the fans, and I’m overwhelmed by their love and support… I’m blessed to do what I love.”

Born and raised in Chicago, Odicho says she hasn’t experienced incidents of discrimination in her hometown, but said she believes sometimes people assume certain things about a culture or person they don’t know about. Yet, she believes her platform and comedy may change that.

“I have a huge appreciation for my culture and I am very proud of my ethnicity,” she said. “It is a huge part of who I am. I am proud of our language, our customs, dances, our rich history, our food and our churches who have done such a good job of preserving our Assyrian roots and our identities. We are a people in the diaspora; we don’t have a country and I think it’s because of that, that it’s so important to hold on to who we are. That is the beautiful aspect of it.

“Growing up Assyrian in America was interesting, beautiful and frustrating, but it’s also given me my platform and my comedy and I am very appreciative of that and juggling between two cultures.”