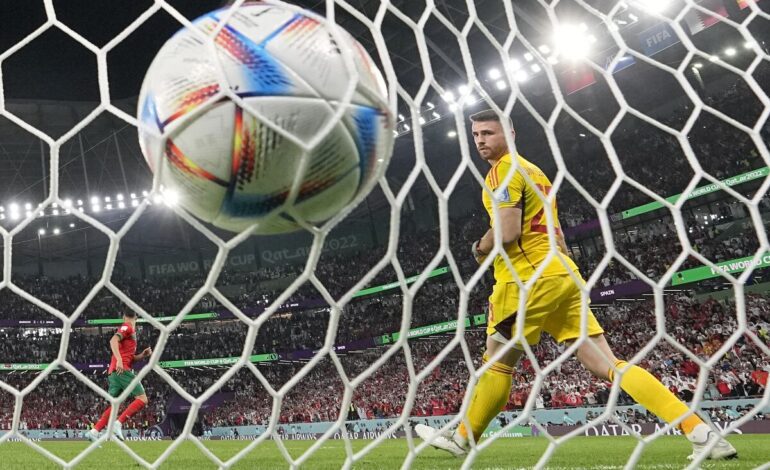 Spain's goalkeeper Unai Simon looks around after Morocco's Achraf Hakimi scored the winning penalty during a shootout after the World Cup round of 16 soccer matches between Morocco and Spain, at the Education City Stadium in Al Rayyan, Qatar, Tuesday, Dec. 6. (AP photo/Martin Meissner)

The first-ever FIFA World Cup held in the MENA (Middle East/North African) region has brought a real opportunity to showcase football pedigree on the field and introduce the world to its fan culture in the stands and outside of Qatar’s eight stadiums.

While the host nation bowed out in the group stage, it was embraced by fans from across the region who were willing to wear Qatari colors and cheer for them like it was their own nation. Many felt a responsibility to represent the Arab world through shared aspects of traditions and cultures while also providing the bouncing and shaking of the stands that the quadrennial tournament demands.

In Group B, Iran narrowly missed out on qualification. Team Melli rebounded from an opening game thumping by England with a massive 2-0 win over Wales. The Iranians showed their resiliency with both goals coming late in second-half stoppage time, giving them a chance to qualify on the final day. Although falling just short against the U.S. on the final matchday, Iran again showed why it is usually one of the first teams to qualify for the World Cup out of the entirety of the Asian Football Confederation.

Saudi Arabia’s tournament ended after just three matches, but the host nation’s neighbors provided one of the shocks of the tournament by defeating title contenders Argentina 2-1 on just the third day. Head Coach Hervé Renard’s tactical master plan to starve off Argentina the space through which they prefer to attack was carried out to perfection.

At the other end, Saleh Alshehri and Salem Aldawsari scored goals six minutes apart early in the second half to cancel out a first-half penalty from seven-time Ballon d’Or winner, Lionel Messi. This stunning upset set the tone for the tournament against an incredible backdrop provided by all of the Saudi fans who made their way across the border.

Morocco has always been lauded for its tactical discipline and fighting spirit, Achraf Hakimi reminded everyone that this is also a skilled side, winning the shootout with a deft Panenka to send his home country and the Arab world into ecstasy.

Tunisia also exited after just three matches, but not before beating the reigning champions, France, in their final contest. Wahbi Khazri’s slaloming run through the French defense and smart finish just before the hour mark secured a famous victory for the Eagles of Carthage.

The hero and flag bearer for the MENA region at the 2022 World Cup is, without argument, Morocco. At the time of writing, the Atlas Lions are heading to the quarterfinals on the back of a 3-0 penalty shootout victory over perennial heavyweights Spain, following 120 minutes of scoreless football.

Yet, advancing to the quarterfinals after a scoreless draw and a penalty shootout is no fluke, nor will it be considered lucky by outside observers. Morocco topped a difficult Group F that featured 2018 finalists Croatia, Belgium’s aging, but nevertheless “Golden Generation” and a plucky Canada side led by world-class star Alphonso Davies.

A credible 0-0 draw against Croatia was followed by 2-1 and 2-0 wins over Canada and Belgium, respectively, to win the group.

In the Round of 16, the tactics of Walid Regragui, who only took the reins on August 31, stifled a Spanish side that was always going to have the lion’s share of possession (77 percent), holding the 2010 winners to just one shot on target.

While Morocco has always been lauded for its tactical discipline and fighting spirit, Achraf Hakimi reminded everyone that this is also a skilled side, winning the shootout with a deft Panenka to send his home country and the Arab world into ecstasy.

Morocco is the third African nation to make it through to the last eight (Cameroon 1990, Senegal 2002) and the first-ever Arab/MENA country to play for a spot in the semifinals of the world’s biggest tournament.

Qatar and the MENA region at large have not just met expectations for a tournament held in their own backyard; they surpassed them.