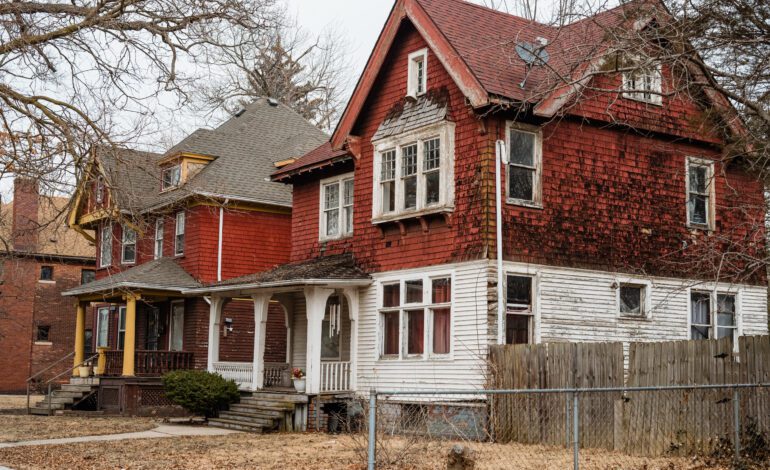 Jennine Spencer's home (left) and the family home where she grew up (right).jpg

Daisy Jackson, a community organizer and caregiver who lives in Detroit’s Islandview neighborhood, found something unexpected when she ran a title check on her house. Someone had placed a lien on the home, the three-story Foursquare-style residence on Field Street where she’s lived for more than 50 years. Confident that her home has been fully paid for, Jackson suspects the lien may be part of some kind of scam.

“I think it’s fraud, because it doesn’t have the right social security number. And the middle initial is [wrong]. It’s Daisy Jackson, but we have two different middle initials.”

Jackson discovered this while participating in a home stabilization program focused on helping long-time East Siders remain in their neighborhoods. Still in its pilot phase, it’s a collaboration between three local nonprofits, The Villages CDC, MACC Development and the Wayne Metro Community Action Agency.

The program provides grants of up to $2,500 per household to qualifying homeowners on the city’s East Side. And it’s geared towards native Detroiters and senior citizens. These residents get help running a title check on their home, which is deducted from their grant. If they need legal assistance navigating title issues or probate court, that’s also paid for out of their program money. Wayne Metro also aids participants in navigating a range of tax and utility issues that might cause difficulties in retaining the homes.

Then the homeowners get help setting up a will for the properties. Those over the age of 65 get assistance through a program called Elder Law. Otherwise, legal assistance is provided to help draft a will. Finally, after those steps are completed and there is enough funding left, up to $2,350 of the grant can be used for minor home repairs.

Jackson, who currently lives with her daughter and granddaughter at their Field Street home, found out about the home stabilization from MACC Development while attending a community meeting. In addition to finding out about the lien, she also took a Zoom class with Elder Law and drew up a will. She was also able to pay to cut down a tree that had become a nuisance on her property. She has also been consulting with lawyers connected to Detroit Eviction Defense and working on getting a Legal Aid attorney to help her resolve the lien issue.

For Jackson, participating in the home stabilization program has given her confidence that her home will stay in the possession of her family after she’s gone.

“It’s just a nice program,” she said. “I appreciate them coming to the neighborhood working with the other residents. They are trying to keep us together, because we are a community.”

A “stepping stone” for stabilization

The home stabilization program got started through conversations between MACC Development and The Villages CDC about the difficulties long-time East Side residents have had holding onto their homes. The two nonprofits share concerns about the over assessment of property taxes by the city of Detroit that contributed to some Detroiters losing their homes as well as how recent development trends ⁠— particularly in Islandview ⁠— may be impacting existing residents. Home repairs have also been a major issue for many East Side homeowners.

“In a lot of circumstances the resources that should be available and should be accessible by residents aren’t,” said Mac Farr, director of the Villages CDC. “What we did was put together a program that would provide sort of a stepping stone for people to be able to apply for other programs.”

Early in the pandemic, MACC Development put together a program called 48214 CARE aimed at connecting neighbors and providing a variety of resources ⁠— including emergency home repair grants of up to $500 ⁠— to residents in the 48214 Zip Code. Edythe Ford, MACC Development’s director of community engagement, sees the home stabilization program as a related attempt to assist community members in the area.

“We’re partnering and trying to put all the resources that we have available to help our neighbors,” she said. “[We hope it will help] clean up blight in our neighborhoods and encourage people not to move, while also retaining generational wealth for African Americans.”

Ten East Side residents have been involved in the pilot phase of the home stabilization program, three in East Village, one in North Village and six in Islandview. Of these participants, six have had title issues of varying levels of severity, a fact Farr finds “illuminating” in regards to the realities many homeowners are likely facing on the East Side. And resolving some of the legal issues with the homes is taking longer than expected due to a judicial backlog tied to the pandemic.

As for repairs, program organizers have received a $20,000 grant from the A.A. Van Elslander Foundation to help one of the participant’s homes be ready for a federal weatherization program that will make the residence more energy efficient.

Farr said he hopes that the participants in the pilot will have graduated by the end of spring. He and other program organizers will then be looking back at what they’ve learned and developing a tighter process for the next cohort, which is expected to begin this fall.

At the end of the day, Farr wants residents to know that the program is about much more than individual homes. For him, It’s about letting community members know that the sponsors of the program care about preserving East Side neighborhoods and keeping long-term residents in place.

“A lot of people feel like they’re getting pushed out ⁠—and I can’t say that people’s feelings are wrong,” Farr said. “But by taking steps that are proactive and committing real resources to it, hopefully we can begin to cut against that.”

– Resilient Neighborhoods is a reporting and engagement series that examines how Detroit residents and community development organizations are working together to strengthen local neighborhoods. This story was originally produced and published by Model D Media and is reprinted in New Michigan Media newspapers through a partnership supported by the Kresge Foundation.

This story has been edited for style.