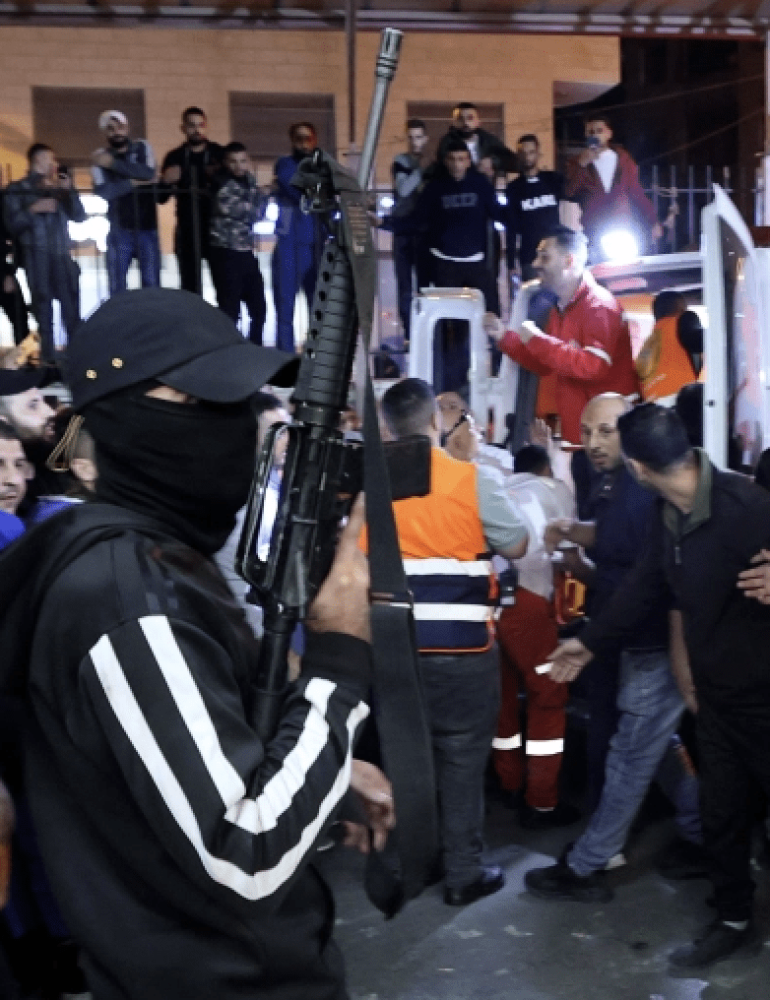 A member of the Lions' Den group escorts injured men into a hospital after Israeli forces raided Nablus, in the occupied West Bank, early on October 25. - Photo by AFP

A commander of Palestinian Islamic Jihad and another Palestinian resistance fighter were killed early Thursday morning in clashes between Palestinians and Israeli occupation forces near Jenin. The clashes happened after the IOF raided the city overnight to conduct arrests.

According to the Spokesperson’s Unit of the IOF, three Palestinians suspected of being involved in terrorist activities were arrested. Three M-16 firearms were also confiscated during the raid.

The Palestinian Islamic Jihad movement confirmed that Muhammad Ayman al-Saadi, the commander of the Jenin Brigade, and Naeem Jamal Zubaidi were killed in the clashes. A third Palestinian was also injured.

A strike and a general mobilization were declared in Jenin by Palestinian factions following the clashes. Tariq Ezz El Din, the spokesperson for Palestinian Islamic Jihad, warned that “The massacre committed by Israel against our people and our resistance fighters in the Jenin camp at dawn today will not go unnoticed, and this criminal occupier will pay the price for his heinous crime.”

The clashes on Thursday morning come amid heightened tensions between resistance fighters and occupation forces in the West Bank. The IOF killed five Palestinians in Al-Mughayyir and Beit Ummar on Tuesday.

The two Palestinians shot and killed early Thursday morning, Saadi and Zubaidi, were 26- and 27-years-old. The senior fighters and commanders of popular groups such as the Lions’ Den and the Palestinian Islamic Jihad are younger than ever as the next generation of resistance fighters takes center stage. The Arab American News spoke about this with a Palestinian activist who wished to keep their name anonymous for obvious reasons.

The Arab American News asked the activist how young they were the first time they remembered personally experiencing the evil of occupation forces.

“It saddens me to admit that the first war I had in my life was the Intifada in 2000, the year I was born.” The activist said. “The occupation has been a part of my life every year as I’ve grown older, as if war is inevitable and obligatory for me to live in and be a part of.”

We then asked why the activist believes this generation is so determined that war against the occupation is the answer.

“For this generation, it considers that war and response to the crimes of the occupation is the only answer,” they said. “We have tried many peaceful methods, but unfortunately, all of our efforts have failed. The Israeli occupation has persisted in its actions and committed massacres against our Palestinian people. Therefore, this war is the only solution to stop the massacres.”

The activist was asked what their thoughts were when they heard about last week’s attacks against Israelis in Jerusalem.

“The attack in Jerusalem carried out by Palestinians is very normal and something that should be expected. We see this as a small response to the occupation’s crimes, and my reaction was very happy to this operation against them.”

The Arab American News ended the interview by asking what the one thing the activist wished Americans knew about this generation of Palestinian youth that the West, especially the United States, could learn from.

“The important thing that Americans should know is that the occupation destroyed the lives of the youth in Palestine,” they said. “The life of poverty and living in the belief that at any moment a young man could lose his life from this war is a worrying matter, and even losing relatives is a suspicious matter. This is the life of young people between fear, anxiety, poverty and life. It is a tragedy caused by the Israeli occupation, so you should help and support the Palestinian youth.”