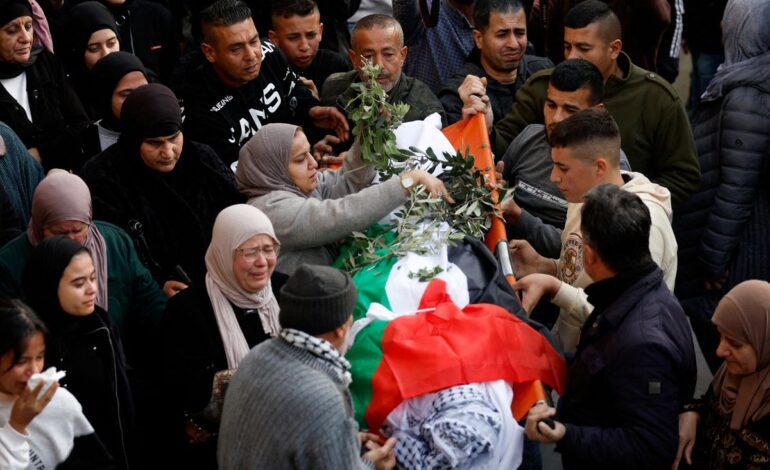 Mourners carry the body of Palestinian Jana Zakarneh during her funeral, in Jenin, in the Israeli-occupied West Bank, December 12. – Reuters

WEST BANK – Israeli forces shot and killed a 16-year-old Palestinian girl during a firefight with militants during a raid in the city of Jenin on Sunday, authorities said, as a wave of violence in the occupied West Bank continued.

An Israeli military statement said soldiers hit the girl unintentionally as they returned fire at armed gunmen on a rooftop. It said it appeared the girl had been on the roof of one of the houses near the gunmen.

Palestinian Prime Minister Mohammad Shtayyeh said the girl, whom he named as Jana Zakarneh, was killed “in cold blood” by an Israeli sniper and said Israel must be held accountable.

Israeli Prime Minister Yair Lapid said he expressed sorrow over the girl’s death and sent condolences to her family. Israel would continue to investigate the incident, he said.

Jenin, in the northern West Bank, houses a sprawling refugee camp in which armed militant groups, including Islamic Jihad and Hamas, operate openly.

Along with the nearby city of Nablus, it has been at the center of much of the violence in the West Bank this year as Israeli forces have conducted near-daily raids as part of a crackdown following a deadly series of attacks by Palestinians in Israel in the spring.

The army said it arrested 18 wanted individuals during the raid, including three suspected of “terrorist activity.” During the raid, it said, soldiers came under heavy fire and were targeted with explosives.

Firebombs were thrown from roofs of houses and the soldiers responded with live fire toward “armed suspects identified in the area,” it said.

“The IDF (Israel Defense Forces) and its commanders regret any harm to uninvolved civilians,” the military said, and rejected claims that civilians had been purposefully targeted.

During one of the most violent years in more than a decade, Palestinian authorities say at least 165 Palestinians, including both members of militant groups and civilians, have been killed by Israeli forces in the West Bank this year.

At the same time, at least 23 Israeli civilians and eight members of the security forces have been killed in Israel and the West Bank, while violent clashes between Israeli settlers and Palestinians have also increased.