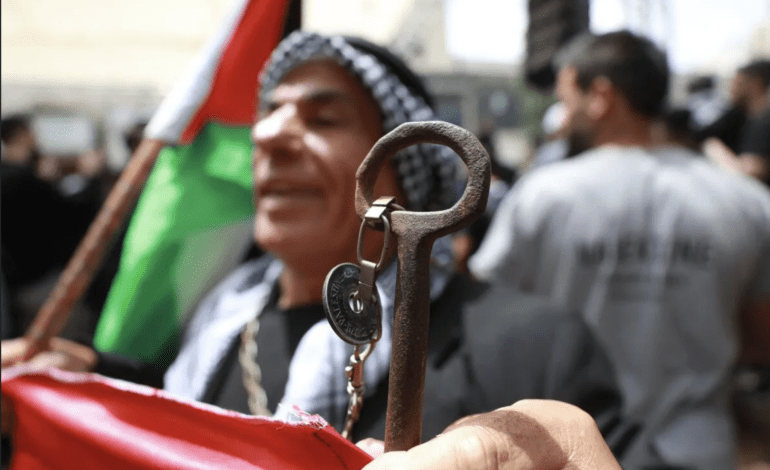 People take part in a demonstration with Palestinian flags in Ramallah, West Bank on May 15, – Anadolu Agency

The next Nakba Day will be officially commemorated by the United Nations General Assembly on May 15, 2023. The decision by the world’s largest democratic institution is significant, if not a game changer.

For nearly 75 years, the Palestinian Nakba, the “Catastrophe” wrought by the ethnic cleansing of Palestine by Zionist militias in 1947-48, has served as the epicenter of the Palestinian tragedy as well as the collective Palestinian struggle for freedom.

Three decades ago, namely after the signing of the Oslo Accords between Israel and the Palestinian leadership in 1993, the Nakba practically ceased to exist as a relevant political variable. Palestinians were urged to move past that date and to invest their energies and political capital in an alternative and more “practical” goal, a return to the 1967 borders.

In June 1967, Israel occupied the rest of historic Palestine — East Jerusalem, the West Bank and Gaza — igniting yet another wave of ethnic cleansing.

Based on these two dates, Western cheerleaders of Oslo divided Palestinians into two camps: the “extremists” who insisted on the centrality of the 1948 Nakba, and the “moderates” who agreed to shift the center of gravity of Palestinian history and politics to 1967.

Such historical revisionism impacted every aspect of the Palestinian struggle: It splintered Palestinians ideologically and politically; relegated the Right of Return for Palestinian refugees, which is enshrined in U.N. Resolution 194; spared Israel the legal and moral accountability of its violent establishment on the ruins of Palestine and more.

Leading Palestinian Nakba historian Salman Abu Sitta explained in an interview a few years ago the difference between the so-called pragmatic politics of Oslo and the collective struggle of Palestinians as the difference between “aims” and “rights.” Palestinians “don’t have ‘aims’ … (but) rights,” he said. “… These rights are inalienable, they represent the bottom red line beyond which no concession is possible. Because doing so will destroy their life.”

Indeed, shifting the historical centrality of the narrative away from the Nakba was equivalent to the very destruction of the lives of Palestinian refugees as it has been tragically apparent in Gaza, Lebanon and Syria in recent years.

While politicians from all relevant sides continued to bemoan the “stagnant” or even “dead” peace process — often blaming one another for that supposed calamity — a different kind of conflict was taking place. On the one hand, ordinary Palestinians along with their historians and intellectuals fought to reassert the importance of the Nakba, while Israelis continued to almost completely ignore the earth-shattering event, as if it is of no consequence to the equally tragic present.

Gaza’s “Great March of Return“(2018-2019) was possibly the most significant collective and sustainable Palestinian action that attempted to reorient the new generation around the starting date of the Palestinian tragedy. Over 300 people, mostly from third or fourth post-Nakba generations, were killed by Israeli snipers at the Gaza fence for demanding their Right of Return. The bloody events of those years were enough to tell us that Palestinians have not forgotten the roots of their struggle, as it also illustrated Israel’s fear of Palestinian memory.

The work of Rosemary Sayigh on the exclusion of the Nakba from the trauma genre, and also that of Samah Sabawi, demonstrate not only the complexity of the Nakba’s impact on the Palestinian collective awareness, but also the ongoing denial — if not erasure — of the Nakba from academic and historical discourses.

“The most significant traumatic event in Palestinian history is absent from the ‘trauma genre,’” Sabawi wrote in the recently-published volume, Our Vision for Liberation.

Sayigh argued that “the loss of recognition of (the Palestinian refugees’) rights to people- and state- hood created by the Nakba has led to an exceptional vulnerability to violence”, with Syria being the latest example.

Israel was always aware of this. When Israeli leaders agreed to the Oslo political paradigm, they understood that removing the Nakba from the political discourse of the Palestinian leadership constituted a major victory for the Israeli narrative.

Thanks to ordinary Palestinians, those who have held on to the keys and deeds to their original homes and land in historic Palestine, history is finally being rewritten, back to its original and accurate form.

Israel’s ambassador to the U.N., Gilad Erdan, rightly understood the U.N.’s decision as a major step towards the delegitimization of Israel as a military occupier of Palestine. “Try to imagine the international community commemorating your country’s Independence Day by calling it a disaster. What a disgrace,” he said.

Absent from Erdan’s remarks and other responses by the Israeli officials is the mere hint of political or even moral accountability for the ethnic cleansing of over 530 Palestinian towns and villages, and the expulsion of over 750,000 Palestinians, whose descendants are now numbered in millions of refugees.

Not only did Israel invest decades in canceling and erasing the Nakba, it also criminalized it by passing what is now known as the Nakba Law of 2011.

But the more Israel engages in this form of historical negationism, the harder Palestinians fight to reclaim their historical rights.

May 15, 2023, U.N. Nakba Day represents the triumph of the Palestinian narrative over that of Israeli negationists. This means that the blood spilled during Gaza’s March of Return was not in vain, as the Nakba and the Right of Return are now back at the center of the Palestinian story.

— Dr. Ramzy Baroud is a journalist, author and the editor of The Palestine Chronicle