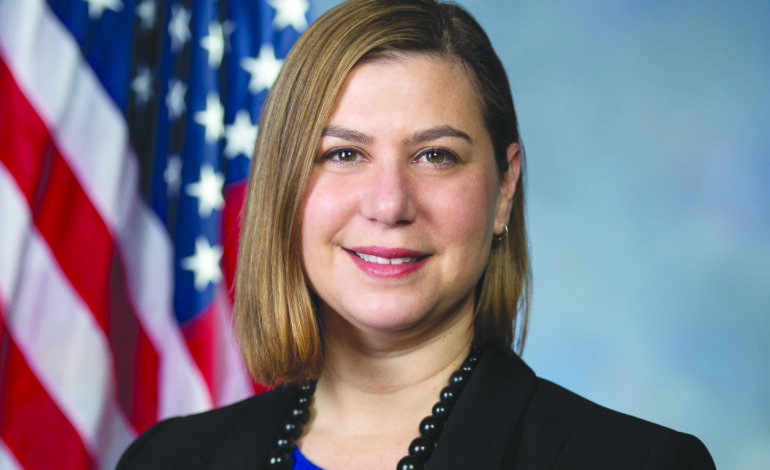 U.S. Rep. Elissa Blair Slotkin (D- Holly) recently returned from a nine-day trip to the Middle East over Thanksgiving. The Congressional Delegation of House Veterans Affairs Committee members visited Jordan, Kuwait, Iraq and Lebanon. Slotkin had to miss the Lebanon portion of the trip due to President Biden’s visit to Bay City, Michigan. She recently spoke with The Arab American News about the purpose of the delegation’s trip.

While the delegation spent a couple of days in each country, the majority of time was spent in Baghdad and Erbil, the most populated city in the Kurdistan region of Iraq. Slotkin is familiar with the country after spending three tours with the CIA and alongside the military. She’s been in and out of Iraq for the last 19 years.

While in Baghdad, Slotkin and the rest of the congressional delegation met with Prime Minister Sudani and visited many Shi’a- and Sunni-dominated areas. They then flew north to Erbil and were able to hear first-hand from mayors of Christian villages in the Ninevah plains.

“The truth is, it’s a pretty tough situation because Iranian-backed militias are surrounding many of these villages and controlling access in and out,” Slotkin said when asked about the living conditions of the Chaldeans and how is it different from that of other Iraqis. 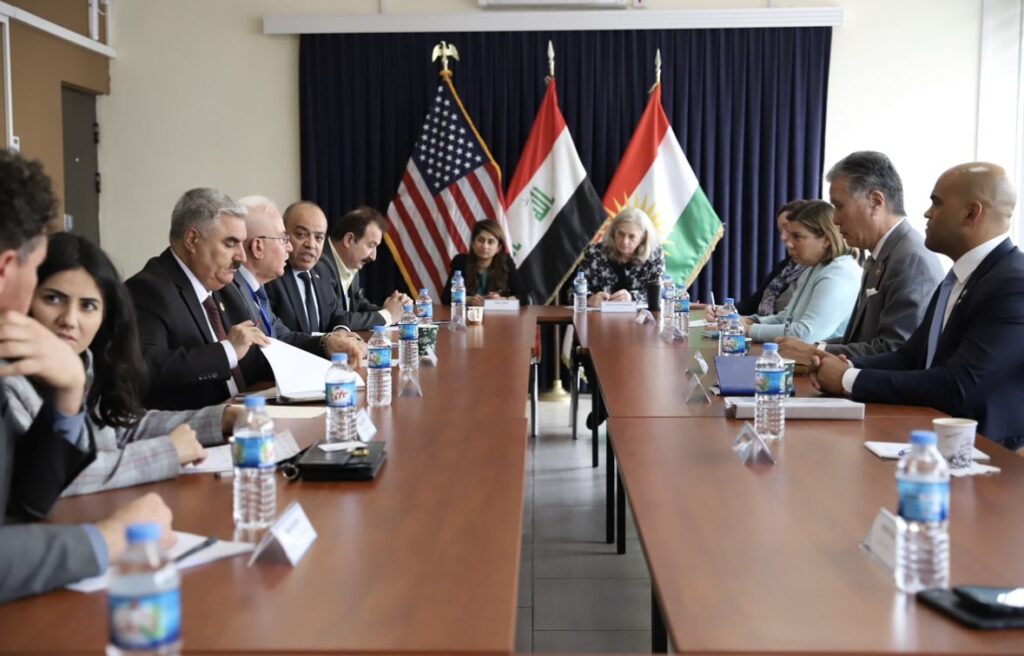 “These villages happen to be on an important strategic route that goes from Iran, through Iraq and Syria, and into Lebanon,” she said. “These militias are very interested in controlling the traffic and movement around these villages, and that has constrained the lives of Iraqi Christians a lot.

“They must go through several checkpoints just to go from village to village and travel to the nearest cities. What has happened is that many people, particularly Christian Iraqis who left when ISIS started fighting in 2014, have yet to return because of the instability and the militia presence in the area.”

As an American and a Michigander, Slotkin said she wants there always to be a Christian presence in Iraq because it is one of the birthplaces of Christianity. However, she said it was difficult to hear “the personal insight of many of these mayors and Christian religious leaders about how constrained life has become in Iraq.”

When asked about the number of Chaldeans in Iraq diminishing since the U.S. invasion in 2003 and how the U.S. administration can explain the mass exodus of Christians while the U.S. was in control of the country, Slotkin said she believes there are two or three phases to the answer.

“One is that when Saddam Hussein was ruling Iraq, many Christians immigrated, including to the United States, representing a large community in Michigan,” she said. “Also, following the instability that followed the U.S. invasion in 2003, the number of Christians leaving Iraq continued and increased.

“Then, after things finally stabilized, ISIS began taking over large areas of Iraq and Syria in 2014. ISIS singled out minorities in Iraq for the worst of their behavior. I think that the Yazidis are at the top of the list for being targeted, but Christians were also intensely targeted by the extremists who ran ISIS, so nearly half of the Christian population left Iraq during the 2014-2015 period. It’s a sad situation, but in a country’s unstable political and military situation, minorities often get the short end of the stick. That has definitely happened to the Christians and Yazidis in Iraq over the last 20 years.”

Following the U.S. invasion of Iraq in 2003, much of the infrastructure was destroyed. Countless people were disfranchised, especially minorities. Today, many Iraqis live without clean water. There is no electricity, jobs and no security. We asked Slotkin if the U.S. government takes any responsibility for this sad situation the Iraqis were left with.

“I think it depends on who you talk to in the U.S. government,” she said. “Certainly, I think that the United States has learned some painful lessons in both Iraq and Afghanistan. I think that just the fact that the government in 2003 thought that this invasion would be short and quick and just completely misread how difficult it would be to try and be the government for another country. 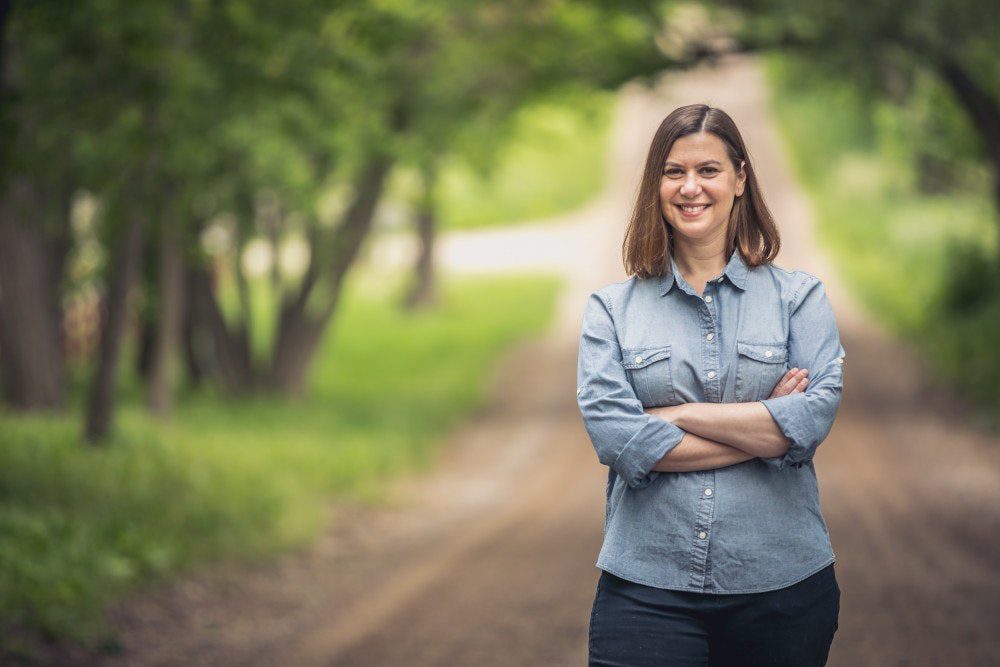 Iraq has a place in my heart. I care about it, and I sincerely want Iraq to succeed. Whether it’s listening to Iraqis, Iraqi Americans or Iraqi Michiganders, I want to use my love for the country to make it a place where people want to live and invest.— U.S. Rep. Elissa Slotkin

“And to be honest, I think that after the last 20 years, I don’t know any Americans who think that our long-term presence in a place like Iraq was a good strategic investment,” she added. “In fact, it made us weaker as a nation and left Iraq in a complete mess. I can’t speak for everybody, but I believe that no one can look at our invasion of Iraq and feel that it was a strategic victory.

“When we were speaking with Prime Minister Sudani, he was really pushing us not just to strengthen a military relationship, but also a cultural and economic relationship. He wants to increase trade and opportunity. The prime minister wants to increase the number of Iraqi students studying in the United States. He wants to talk about agriculture and water, which, to me, is how we try to make up for some of the strategic failures by having a stronger relationship on nonmilitary issues with the country of Iraq.”

We asked Slotkin about the sectarian government the U.S. established following the invasion. It has failed to address the needs of Iraqis. As a result, their country is in shambles. We asked her about her take on the matter and what she would do as a member of Congress to address this issue.

“This is part of why I went to Iraq,” she said. “There are very few members of Congress who are making congressional delegation trips to Iraq right now, and I spent my Thanksgiving over there because I want Iraq to succeed. I want to find out what the United States Congress can do to help their country succeed, and that’s why we were the first Congressional delegation to meet with the new Prime Minister Sudani. 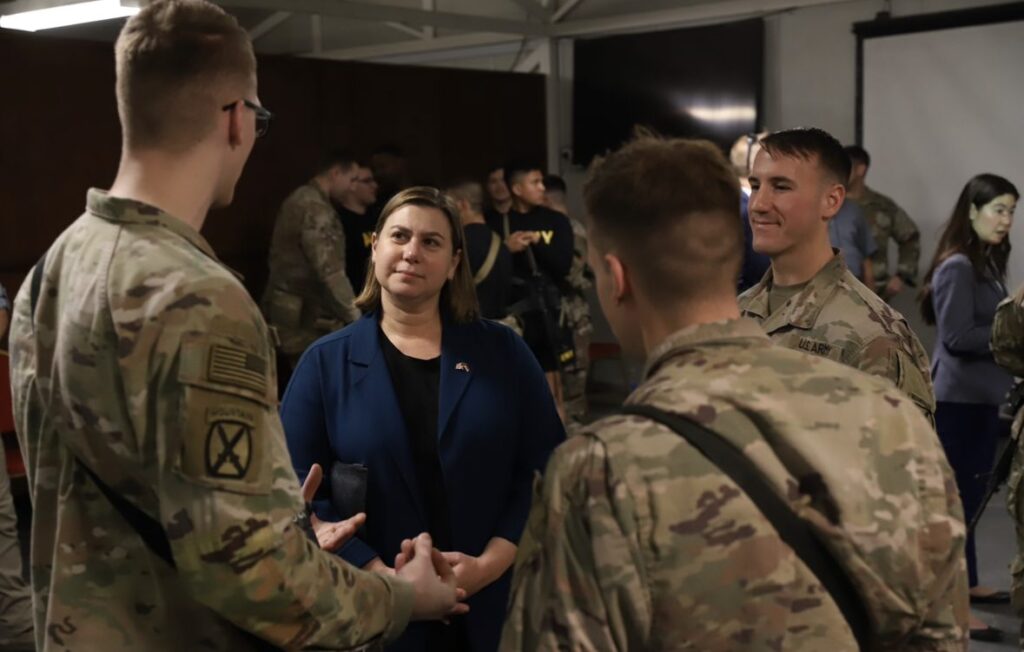 “We met with him so that he could tell us some of the things he needs to stabilize the country,” she added. “In terms of sectarian violence, the U.S. failed to set up a government that could function separate from sectarianism. So, to a certain extent, we also need Iraqi leaders to step up and try to push back some of the sectarianism.

“We were in Iraq to figure out his priorities, what he thinks we can do to enhance stability. For example, where can we cooperate on things like water quality and economic trade and take that back to Washington? And then, my trip to northern Iraq was about trying to protect some of the minorities who are still completely displaced.

“The Yazidis are living in internally displaced person camps and can’t return to their home towns. It’s about ensuring we protect some of the folks still living in camps and pretty dire situations. That’s why I was there, to listen, and one of the things that we want to make sure continues is some economic development work that we are going to do with the Iraqi government.”

Finally, The Arab American News asked Slotkin what the one thing was she wished people in Michigan knew about her trip that they wouldn’t find through mainstream media.

“I served three tours there; I saw Iraq up close,” she said. “I met my husband in Saddam Hussein’s palace. Iraq has a place in my heart. I care about it, and I sincerely want Iraq to succeed. Whether it’s listening to Iraqis, Iraqi Americans or Iraqi Michiganders, I want to use my love for the country to make it a place where people want to live and invest. I want to be a good partner to our Michigan community which has so much to offer on the future of Iraq.”