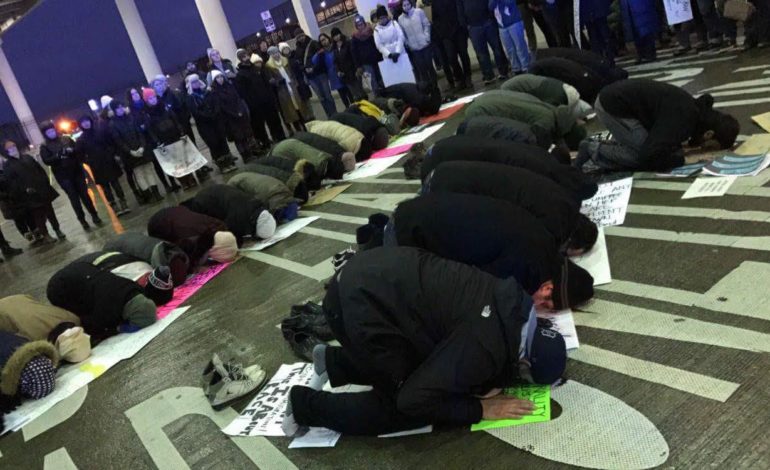 DETROIT— Over the weekend, protests by non-Muslim and Muslim Americans alike erupted all over the country. These citizens joined together in resisting President Trump’s executive order that prohibits immigrants from seven Muslim-majority countries from entering the United States for three months.

Attending the protest and supporting Muslims was already a gesture of pure kindness, but non-Muslims in the Metro Detroit area did more than that this past weekend.

During the “No Muslim ban” protest at Detroit Metropolitan Airport, a group of Muslims noticed the time for prayer looming.

“My friend asked me if I could recite the athan (call for prayer) and I agreed,” Ali Aboukhodr, 23, said. “So we went searching for a megaphone or a microphone so that we can recite the athan.”

Aboukhodr said another protester tried to find a megaphone for them, but he ended up reciting it without one since the time for prayer had arrived.

“Someone came up with the idea of forming a circle and then I would stand in the middle so that I could be heard during the athan,” he said. “[And] my friend helped identify the direction of prayer so that I can face the Qibla (direction Muslims face when they pray) as I recite…”

Aboukhodr said he thought the crowd wouldn’t be quiet, as they were very much in tune with the protest. However, they all formed a circle and surrounded him in silence.

“…Muslims and non-Muslims alike stood there in solidarity for a right we are free to express and practice— our religion,” he said.

After Aboukhodr finished the call for prayer, the crowd cheered and clapped.

“It felt humbling to be in the position of calling the prayer and I was very grateful for and inspired by the fact that we had brothers and sisters from different faiths stand in solidarity with us,” he said. “That was a point we hoped to emphasize, as we held a poster that quoted Ali Ibn Abi Talib that read ‘People are of two types: Either your brothers in faith or your equals in humanity.’”

Yet, American Non-Muslims’ kindness did not end there. Aboukhodr said the protesters saw one of his friends use his poster as a prayer mat, so they immediately started offering their own as prayer mats for the rest of the Muslims there to use, since the pavement was wet.

He said it was one of the most beautiful gestures he had ever experienced.

“The irony of the situation is that rather than dividing the people and potentially isolating Muslims, the situation united us all,” Aboukhodr said. “Many people proved to be principled human beings who do not stand for or tolerate injustice, regardless of the victim. The Quran stresses this concept, urging us to stand for justice, even if it we were to stand against our own selves.”

Those who could not attend the protest due to work or other responsibilities showed their support in a special way.

Nadeen and Zaharaa, both friends and staff at a local hospital, received roses from a nurse’s little daughter with a note that said: “In times of darkness, let’s spread the love and light through one act of random kindness at a time.”

The little girl approached Nadeen, who was heading to the prayer room. She said the kind act made her cry.

“There are no executive orders or oppressive laws that can eliminate the power of love and humanity in those who understand,” the 21-year-old said. “Live and love through her wise message.”

Zaharaa, 24, said she found the child standing behind her during her lunch break.

“I was at the cafeteria, trying to get a salad and I was just putting my toppings…,” she said. “Then, I turned around and all I saw was this cute little girl. She handed me a flower and told me, ‘Here you go. This is for you.’”

Zaharaa thanked the girl and said she honestly didn’t know what else to say.

“I kept thanking her,” she said, adding that the gesture made her emotional. “I wanted to do something in return because she left me speechless.”

In an exchange of texts in which Zaharaa mentioned the girl, her sister related a similar experience. Zaharaa’s sister and her brother-in-law had been at a Mexican restaurant in Plymouth, where a waiter came up to them, described a woman and asking them if they knew her.

They told him they didn’t.

“‘He was like that person just paid your whole bill,’” Zaharaa quoted her sister, adding that the waiter told the couple that the woman had said, “I want to pay for that Muslim couple right there.”

Zaharaa’s brother-in-law ran outside immediately and looked for the woman, but couldn’t find her.

She said these types of acts make you feel like there are still good people in the world and advised Muslims not to give up, to resist and to have hope.