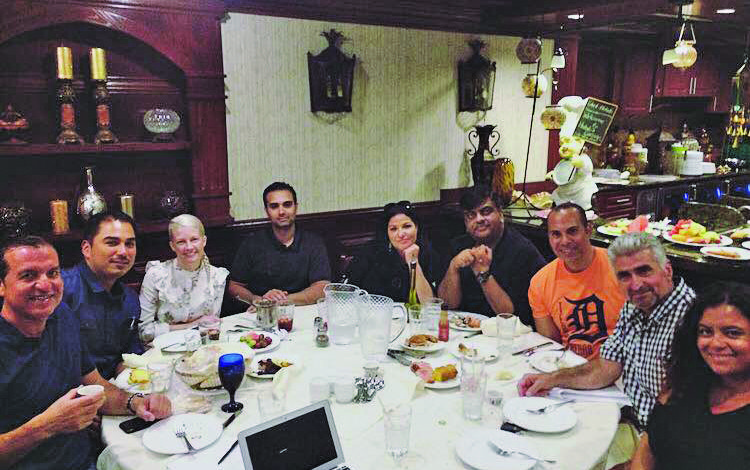 DETROIT — Each Ramadan, many non-Muslims admire their friends, neighbors and co-workers’ willingness to fast.

The communal effect fasting has on Muslim populations is another dimension of Ramadan to which many have become attuned.

Even Hyundai CEO Mong Hyun Yoon, amazed at his Muslim workers’ ability to abstain from food and drink during long workdays with apparent ease, decided to participate in fasting himself.

This year, he decided to fast alongside his line workers “to be one with the (Turkey-based Hyundai Assan) family in their thoughts”, according to a company letter.

“The thing that has shocked me the most is that you fast without seeing fasting as a chore and you show the willingness to fulfill it as an obligation,” he admitted to his employees in his letter.

For decades, Rima, a hairdresser and beautician hailing from Ramallah, Palestine, worked from morning to evening fixing hair and taking clients.

An exchange student photographs iftar and suhur at her host family’s home in Rabat, Morocco.

Come Ramadan, the only difference was that the trusty coffeemaker in the back room of her salon had, for a short while, taken a break.

Rima, a Christian, fasted alongside Muslim friends and family members, including her husband, though her own faith does not command her to do so.

The added motivation she was given in fasting alongside others in her community, while encouraging, was not singular to her success in observing the holy month.

“I wake up for Suhoor, I work and get used to it,” she said.

Agnes Fischer, architect of the Solidarity 365 Project, translates her immersion into Dearborn’s unique Arab and Muslim community with insight that recognizes the universality in nuanced practices and experiences.

“As part of my Solidarity 365 project, I felt it made sense to not only show non-Muslims who Muslims are as people by interviewing them to get a glimpse into their personal lives, showing others how they make contributions to better our society, but to also show a more intricate aspect of their religion that is so much a part of them,” she told the AANews.

Fischer decided to participate in Ramadan this year, fasting alongside Muslim neighbors and friends, and is documenting her insights and perspectives online.

“Fasting was an easy decision to make,” she said, acknowledging that the practice took some adjustment.

“It started off rough for me, physically,” she said. “However, since I have been documenting my experience publicly on a day-to-day basis, I received advice and support on how to mentally as well as physically adjust.”

She said the advice has been very helpful.

“By day four I was doing much better.”

Emily, a Michigan exchange student in Morocco, plunged into fasting her first Ramadan while studying abroad during her last semester of college.

“At the end of the semester, I stayed for an internship over the summer,” she said. “I was a little nervous about staying because I knew that Ramadan would start about a week into my internship.”

Yet her decision to participate in observing Ramadan was ultimately self-motivated.

“My host mom told me that I should not fast because I didn’t have to, but I wanted to try it,” she said. “I thought it would be a good experience personally and spiritually.”

Emily told the AANews that running through the motions of fasting was not as difficult as she has anticipated.

“By the third day, I had become used to it,” she said. “And it was Monday, so I spent most of the day in the office for my internship. Everyone I was living with and most of the people I was working with were fasting and it had become part of the routine.”

While physical toils and adjustments varied across days and in the circumstances of each individual, each of the non-Muslim fasters recognized the spiritual merits of the act, finding the practice as rewarding as it had been, at times, novel.

“Most of my reflections are just about how this is a great way to practice self-restraint,” Mike, 20, said about the insights he derives from his experience. “But it reminds me about a lesson from catechism about ‘distractions’ and I see fasting as a way to distance yourself from the distractions that could further distract yourself from God.”

While he didn’t anticipate trying to fast until recently, he, “didn’t find it very difficult.”

Fischer also found fasting to be a practice intricate to a spiritual wellbeing regardless of religious denomination.

“Spiritually, this experience has taught me more than I could have imagined,” she said. “I feel it has strengthened my faith in God, it has given me a deeper understanding of Islam and it has inspired me to reflect on the simpler things in life that mean more than the material and less meaningful ‘things’ that we as a society sometimes fixate on.”

She added that it has honed self discipline in addition to spiritual awareness. “Fasting has taught me to be more patient and to practice mindfulness,” she said.