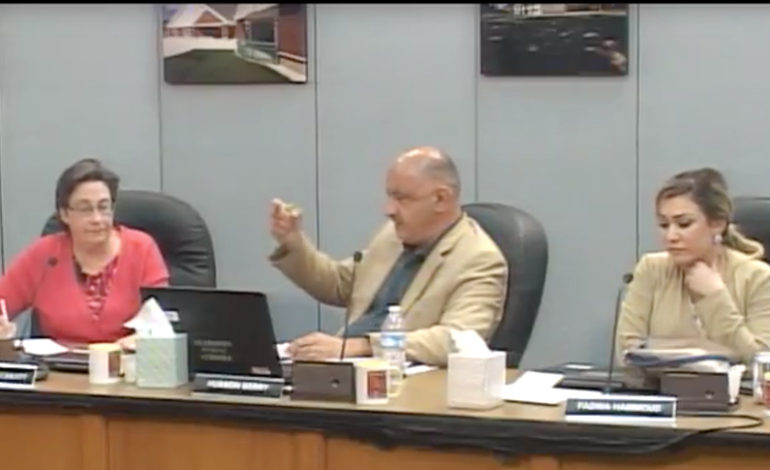 Last Monday’s meeting of the Dearborn Board of Education necessitated careful attention and study as the issue of overcrowding is still at the forefront and the future of our kids and two important institutions— Fordson and Dearborn High Schools— is at stake.

After much evaluation and dialogue on the issue as well as other agenda items, Trustee Hussein Berry ended the meeting in a discreditable sense— questioning Superintendent Dr. Glenn Maleyko’s integrity because of information he received from a second-hand source, or simply gossip.

Berry’s senseless comments in no way diminish Maleyko’s integrity and efficacy, but rather prove that Berry lacks the professionalism and affability to speak to him privately about the matter and ask for clarification and for his side of the story before making unproven assumptions in public. Berry’s senseless comments in no way diminish Maleyko’s integrity and efficacy, but rather prove that Berry lacks the professionalism

At first, Berry applauded Maleyko for updating board members on every public event he attends, but then brought up a house barbeque the superintendent had attended on a Saturday.

Berry said someone told him there were school business conversations at the event, which upset Maleyko, so he asked him to share any information with the board regarding the schools from now on — whether it’s a public or a private event.

Questioning Dr. Maleyko on school matters is reasonable and a responsible practice, but criticizing the superintendent for something he may have said at a private community function and repeating such an allegation in public for the community to hear is a low act Berry should be ashamed of. This is how “fake news” is manufactured and spread. His attempt to humiliate or embarrass the top educator of the third largest district in Michigan in front of the students and employees he leads and serves actually resulted in Berry’s own humiliation.

Berry then falsely accused Maleyko of, “disciplining an employee because of some of the things that were discussed there.”

Maleyko respectfully told Berry that he does not disclose information regarding schools to anyone, unless it’s public information or in the news and not confidential, and that he would never use a conversation at an event to discipline an employee.

Maysam Alie Bazzi, the executive director of staff and student services, politely asked Berry to respect Maleyko as he would any other staff member. She truly deserves to be applauded for her stance as well as fellow board members who spoke out. Since his reelection last year, Berry has been acting continuously angry and aggressive towards colleagues, staff and community members.

The superintendent should not be called out for attending public or private community events and interacting with parents, students or community leaders or residents. Instead, he should be commended for his efforts to reach out and engage with the public, which is good for the district.

Communication is key to understanding and finding solutions, but Berry seems to have no interest in either at school board meetings.

As a board member, he’s supposed to set an example for students instead of sullying the foundation of teamwork with fabricated stories and made-up drama. But Berry chooses to continuously disrupt every meeting, affecting the productivity and enthusiasm of his fellow board members, which residents can visibly see.

He has even attacked former Board President Mariam Bazzi, Trustee Fadwa Hammoud and Trustee Michael Meade since his reelection to the board. At one point during the July 24 board meeting, he publicly spewed lies and fabricated stories about the publisher of The AANews, Osama Siblani, but that’s another subject that our legal counsel is looking into. In fact, the most peaceful and productive meeting the board held recently took place during Berry’s absence because of an overseas trip, even though the board was addressing the potentially contentious subject of boundary changes.

Since his reelection last year, Berry has been acting continuously angry and aggressive towards colleagues, staff and community members. It is not clear why he has a chip on his shoulder, but if he continues to act recklessly, using his elected position to spread rumors and wreck havoc in the district and to bully his colleagues and the leader of the school district— especially at this crucial time as the board gets ready to find a replacement for outgoing Henry Ford College President Stan Jensen— no credible educator will dare applying to our district and the board will end up hiring from the bottom of the barrel.

In his series of bullying episodes, including a pending lawsuit against his colleagues and the school district, Berry isn’t just hurting himself but the entire city and the future of its children.

Community leaders, educators, elected officials and board members should stand up to Berry’s erratic and irresponsible behavior before it’s too late.