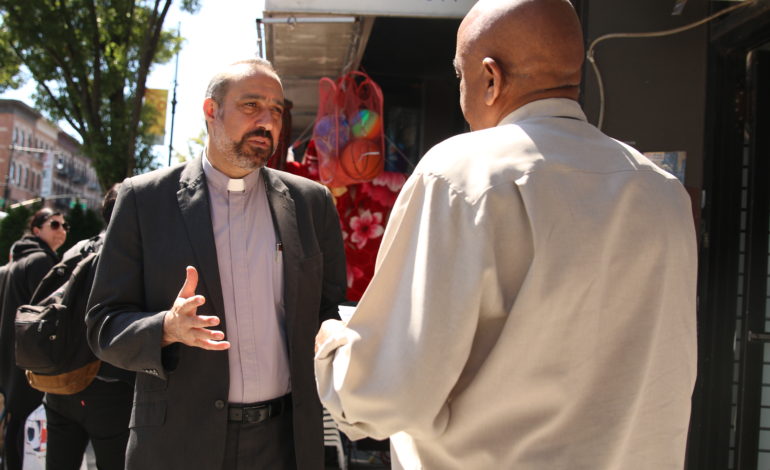 New York City— After a groundbreaking grassroots campaign, Yemeni activist Rabyaah Althaibani choked back tears as she mourned the defeat of the first Arab-American candidate for New York City Council on Tuesday night.

“Yes we lost, but we won,” Althaibani said at a neighborhood bar, surrounded by dozens of supporters for Khader El-Yateem, a Palestinian-born pastor who vied for the seat in southwest Brooklyn. “We were winning when we organized the bodega strike against hate, when we refused to go back into hiding, when we’ve been targeted for so long. Rabyaah Althaibani and Samia Aljahmi make sure a Bay Ridge, Brooklyn resident makes sure where to vote in the primaries

El-Yateem, a Democratic socialist and political outsider, received 31 percent of the vote — 7 percent less than his rival, who was endorsed by the outgoing council member. Bay Ridge is home to the largest number of Americans who speak Arabic at home, according to the Census, but the population has never had a voice in City Council. Although El-Yateem’s campaign ended in close defeat, his supporters say he succeeded in bringing Arabs out of the political shadows.

The campaign registered 600 new voters and mobilized hundreds of volunteers, including nearly 300 on Election Day. Some of the most passionate supporters were Arab women like Althaibani, who called constituents every night and canvassed neighborhoods every weekend for months.

For many supporters, politics were personal. 55-year-old Mala, who volunteered as a translator at a polling site, worked with El-Yateem at his church for 22 years. 19-year-old Salleeah, who voted at her local school, said her family received help from El-Yateem. Others didn’t personally know him, but resonated with his Arab identity. “This is what we are working for, someone who’s suffering like us and knows exactly what it means in this community and how much problems we face as Arabs,” said Yemeni organizer Sonia Elrowmein, who door-knocked with a group of Arab women three days before the vote. “Many people of our community can’t speak English well, so that they can’t explain what problems they face in the community. So, we have to make history and he has to win.”

Although he didn’t win, the campaign still made history. El-Yateem, who has lived in the neighborhood for 22 years, is a Lutheran pastor who founded a task force to unite the neighborhood’s religions after 9/11. He advocates for keeping housing prices low, addressing drug issues and freeing Palestine — rare in New York City where politicians pander to the Jewish vote by supporting Israel.

His district, a residential area on Brooklyn’s southwest shoreline formerly dominated by Italians, is now dotted with shwarma shops, hijabi fashion and Arabic signs. After 9/11, informants infiltrated local businesses and mosques as part of the New York City Police Department’s counter-terrorism policing. The policies broke trust in the government and kept Arab voters away from the polls.

“Turnout has been very low in this district simply because we didn’t have any candidate we got excited over,” El-Yateem said. “Historically, they come to take our money and our vote, then the moment they’re elected, they turn their back on us and issues that most matter to us as a community. This year is different.” He praised his volunteers, who put in long hours, especially Arab women who defied cultural norms by door-knocking, going out to parks and making phone calls. Community activist Widad Indie explained that more Yemeni women than men were involved in the campaign — but some women took coaxing to overcome cultural conservatism. Last week, Indie walked from house to house to pick up and drop off a group of Yemeni high school female volunteers. If she didn’t, their parents wouldn’t be comfortable with the girls going out alone.

“It’s a cultural thing that’s keeping them from participating. But there’s also been a change,” Althaibani said. “Women were always at the forefront. We may not be the majority, but we lead these men.”

At the Brooklyn bar, Althaibani and Indie embraced each other as campaign organizers gave tearful speeches before calling upon El-Yateem. He stood up on a bench, eyes bleary from sleeplessness and raw emotion.

“We challenged the establishment and forced them to speak about issues that matter to people in this district,” he said. “Tonight was only the first step in a long journey that I hope we continue to capitalize and organize and bring people together, because at the end of the day we need to seek bold and inclusive leadership that gives voice to everyone.”

When the crowd dispersed, Althaibani opened up her Facebook page to share a status with her more than 11,000 followers. She started writing: “This is just the beginning.”