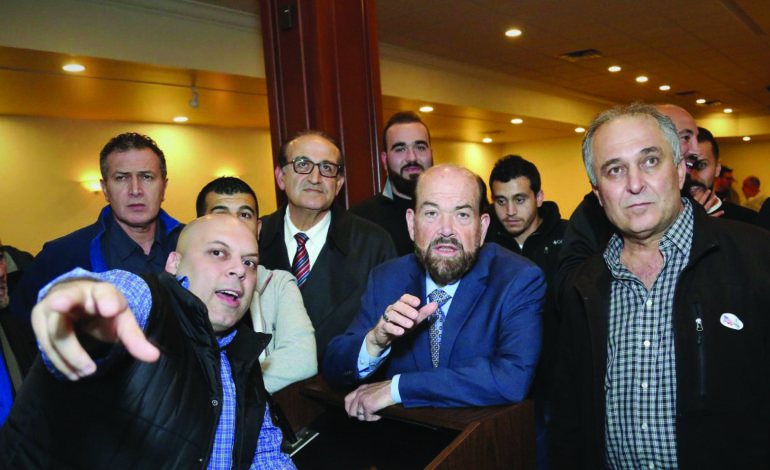 DEARBORN — It was the city’s contentious mayoral race that drove most voters to the polls.

Many voters told The AANews reporters they hoped for a change of course in the city government, as things have changed since Mayor O’Reilly was elected a decade ago.

But voters re-elected O’Reilly with 10,999 votes (57 percent) in the Nov. 7 general election, based on the promise he made during his first run for office in 2007: One vision for the entire city – and that’s already in the works.

About 32 percent of 60,752 registered voters filled in their ballots for either O’Reilly or long-time Councilman Tom Tafelski, who earned 8,218 votes or 42 percent of votes.

Many residents had concerns they said O’Reilly had failed to address during his tenure.

Sporting a Dearborn Firefighters hard hat and a large “Tafelski for mayor” sign outside a polling location, Abe Rentscher told The AANews he’d like to see the city return to its glory days. He’d left in 1985 when he moved to Texas.

Rentscher, who has lived in the city for a total of 30 years, said he moved back about 10 years ago and couldn’t recognize it.

“Garbage on the streets, crime, people racing up and down the streets and people having no respect for the police officers here,” he said. “Dearborn is still a pretty good place to live, but Tom can fix some things and get the city up to where it used to be.”

But as Dearborn becomes more densely populated with Arab Americans, they went to the polls with representation in city government and major development projects in mind.

Although O’Reilly’s administration is a decade old, Arab American voters expressed firm support for him.

Shukri Yahya, who had just voted at a west end precinct, told The AANews he is grateful for O’Reilly’s stance on Arab American issues, especially when a Florida pastor protested with a Quran burning in front of City Hall in 2011.

Yahya said he’s heard Tafelski speak at mosques during the race, but became disenchanted with talks of solutions to non-priority issues, like banning Khat, a commonly chewed light-narcotic plant.

“You just don’t go into a community and solve their problems,” he said.

He added that corruption in the city government exists, but believes O’Reilly is the best choice between the two candidates.

“We really can be the shining light on the hill… as long as we all recognize that we have a duty to each other. We live in a wonderful community, we have great opportunities, our children have great schools. We are in a great position going forward, and it’s because of everybody in this room.” -Mayor Jack O’Reilly

‘Shining light on the hill’

“In Salina alone, the mayor took 80 percent of the vote,” adjunct law professor and campaign volunteer Amer Zahr told a packed room of O’Reilly backers after polls had closed.

Salina Intermediate School houses two precincts and is located in the city’s Southend, where a large number of Arab Americans live.

The diverse faces and ages of residents, volunteers, city officials and business people who packed the venue at Park Place Banquet Hall in Dearborn was a reflection of the mayor’s wide-reaching support.

Applause and chants of “four more years” erupted as O’Reilly was ready to give his victory speech.

He acknowledged that the race was challenging, although he said he’d expected in past years that Tafelski would eventually run for mayor.

“People weren’t taken in by the misconceptions… people were discerning,” he told an enthusiastic audience. He added that he is humbled by the energy many put in and the families who faced heat for supporting his campaign.

“We really can be the shining light on the hill… as long as we all recognize that we have a duty to each other,” he said. “We live in a wonderful community, we have great opportunities, our children have great schools. We are in a great position going forward, and it’s because of everybody in this room.”

In terms of business development, O’Reilly added that he is excited to finish what he started.

Kalid Kaid, board chair of the Yemeni American Chamber of Commerce, urged attendees to look around the room.

“Talk about inclusion,” he told them, regarding O’Reilly’s campaign.

“The other side talked about changes, but they’re changes we don’t need,” he added. “Changes of exclusion, never changes for growth and unity…we’re looking for stability, growth, economic development and partnership.”

Sam Baydoun, a real estate agent who campaigned for O’Reilly, said the mayor understood what the city needed to prosper.

“I believe that we have to continue the course in the next four years,” he said of efforts to strengthen business corridors. “Change was already here, it was on the corner of Michigan Avenue and Monroe.”

In his speech, he thanked the mayor for his leadership and for “taking the heat” on behalf of the Police Department when tough calls had to be made.

Haddad added that when O’Reilly appointed him, the mayor had offered a contract for about five years. He refused on the basis of loyalty and has remained in his position for nine years.

Abed Hammoud, founder of The Arab American Political Action Committee (AAPAC) and a candidate for mayor in the 2001 election, said he’s seen a lot change for the better in the city over the 27 years he’s lived here, but added that voters had secured a better future for generations to come by re-electing O’Reilly.

Most importantly, it was a campaign that brought an uncoordinated community together, he said.

“Anybody who had divisive language did not win tonight,” Hammoud added.

In a statement on Facebook, Tafelski expressed disappointment and called for continued efforts.

“Tonight did not go as hoped, but Dearborn is, and will remain, a great city,” he said. “I’m forever grateful for all the support and urge everyone to stay engaged so we can continue the important work we started with this campaign.”