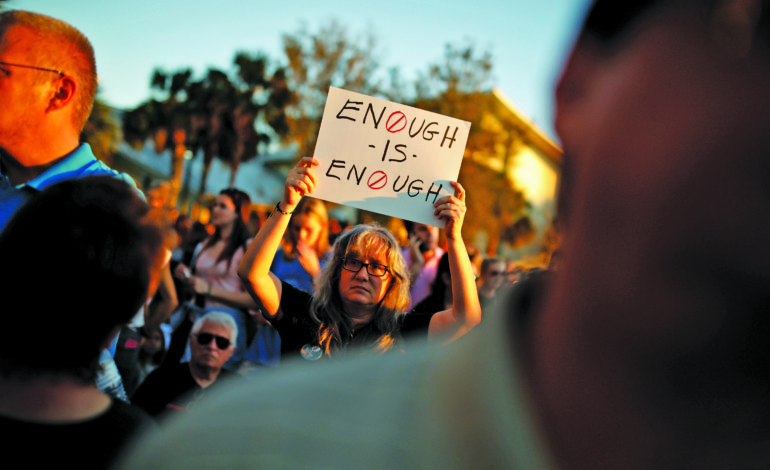 A woman holds a sign during a candlelight vigil for victims of yesterday's shooting at nearby Marjory Stoneman Douglas High School, in Parkland, Florida, February 15/ REUTERS

The thunderous hail of bullets is always followed by the silence of a nation that cannot bring itself to do anything besides offer ineffective hopes and prayers.

Once again, a place for education and advancement has become a scene of horror and fear in America. It is unacceptable that any American should have to endure the terror and trauma the community of Parkland, Florida experienced on Valentine’s Day. Wednesday marked the 30th mass shooting in America since the beginning of the year. There have been 18 school shootings in six weeks of school.

Though we are still learning about what exactly happened in Parkland, we know that community will never be the same and the mere thoughts and prayers are simply NOT enough and are insulting in the wake of yet another mass shooting in our country.

U.S. legislators should strengthen laws regarding weapons, rather than propose legislation that weaken them, like allowing concealed carry in schools. Every single elected official must stand up to for the safety of our kids and against the powerful gun lobby, look at the research and act to save lives. “Extreme Risk Protection Orders” legislation could have made a difference in the Parkland shooting and although one was introduced last June (HB 4706 and 4707),  it languishes in the House Judiciary Committee where they refuse to have a hearing.

It is also beyond time for an assault weapons ban. Elected officials need to care about our kids and their safety more than they care about gun makers’ money and their own political ambitions.

America spends hundreds of billions of dollars on an intelligence and military capability, supposedly to protect Americans from external threats, both real and projected. But our country does very little to protect Americans at home from the very real and obvious threat of gun violence—a threat that took an average of 42 lives per day in 2017.

A day before the Florida shooter’s rampage and 1,000 miles away in Washington, the leaders of the nation’s 17 intelligence agencies briefed Congress on their 2018 worldwide threat assessment. This assessment detailed myriad threats to America’s national security from abroad—China, Russia, transnational organized crime and terrorism—but ignored the threat from within posed by gun violence. Wednesday’s carnage in Florida illustrates the problem caused by this collective failure to see the existential threat posed by gun violence to Americans. As long as it remains easy for malicious people to acquire weapons like those used in Parkland, Las Vegas, Orlando or San Bernardino, Americans will die by the dozens.

Perhaps presenting gun violence as a national security threat will finally galvanize America to act. On his way out as director of the National Counter-Terrorism Center, Nick Rasmussen told reporters in Washington during his final briefing that, “We find ourselves in a more dangerous situation because our population of violent extremists has no difficulty gaining access to weapons that are quite lethal.”

Unfortunately, our president doesn’t see it that way at all. In the wake of the Texas church shooting last November, Trump emphasized mental health, saying “Mental health is your problem here … this isn’t a guns situation.”

Responding to the Florida school massacre and speaking directly to the children across the country, Trump urged them to seek help if they feel “lost, alone, confused or even scared.” The president stressed the need to address mental health issues in America in his first public response to the shooting, but steered clear of any discussion of tightening gun laws.

Addressing a nation “in grief”, Trump said the entire nation, “with one heavy heart is praying for the victims and their families” and promised that his administration is working closely with state and local leaders investigating the attack.

While willing to wade into policy after terrorist attacks, Trump and the White House have repeatedly rejected a debate on gun laws in the immediate aftermath of mass shootings.

Gun violence kills more than 15,000 Americans every year, with the numbers of gun fatalities having risen slightly from 2016 to 2017. A pattern has emerged after each mass shooting: Gratuitous offering of hopes and prayers, followed by proposals for stricter controls on guns or purchases thereof, followed by lobbying by gun advocates and manufacturers for the scuttling of those proposed controls. The net effect is the same, every damned time: Nothing changes.

It is as easy to obtain a semi-automatic military-style rifle today as it was two years ago when a gunman used one to kill 49 people at an Orlando nightclub; it remains legal to buy bump stocks today, just as it was four months ago when a gunman used one to murder 58 people in Las Vegas. The thunderous hail of bullets is always followed by the silence of a nation that cannot bring itself to do anything besides offer ineffective hopes and prayers.