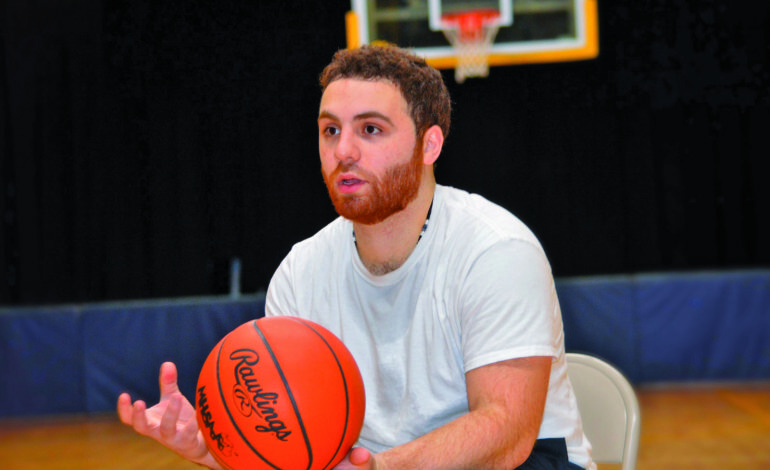 DEARBORN HEIGHTS — Mohamed Bazzi stood on his former high school’s basketball court, dribbled a ball, studied the hoop, aimed and rejoiced as the ball effortlessly whipped through the net.

A yellow and blue banner with his name and scoring achievement of 1,436 points in the 2015 season hanging from the ceiling next to the basketball rim reminded Bazzi how far he’s come and of the journey he’ll embark on next fall.

In his freshman year at Star International Academy, he was one of the top performers in his graduating class throughout the entire state. After graduating two years ago, he received a basketball scholarship to Madonna University.

The only way you can possibly succeed and exceed expectations is to be utterly obsessed with one thing. And if that’s a basketball, I’m perfectly fine with it.

Although he’ll be challenged on the court by veteran players, Bazzi said he wanted to start playing at a that level early on and that he would still be traveling back to the United States during off-seasons to continue his education. He hopes to attend Wayne State University to become a physician’s assistant.Bazzi said he and his agent put together a highlight tape and sent it out to teams in his ancestral homeland.

It didn’t take too long for teams to reach back out, he said.

He said he’s excited to play for a team in a country that’s considered the fifth best globally in basketball, after Australia, China, Europe and America.

“I’m expecting to learn a lot about the business of the game,” Bazzi said. “Your voice becomes worth something when you’re a professional basketball player.”

He added that he’s in the early planning phase of launching a foundation to help people.

Bazzi said he’s prohibited from sharing the name of the league he’ll play with until the start of the new basketball season, in case a different team tries to offer him a sweeter deal.

However, he said it’s a historic program with a training facility in west Lebanon.

He will be provided with a car, housing and food stipends. The team will be scheduled for two hours of practice a day and play a game once a week.

“They take care of you really well,” he said. “They make sure what you’re there for is what you do.”

Bazzi said he might face a culture shock after moving to Lebanon, but that he has his mind set on the ball, not on vacationing.

“I’m really excited to see where I’m from,” he said.

In the meantime, he is training to play with and against athletes who are more physically aggressive and expects fewer foul calls from referees.

He added that basketball is gaining traction in Lebanon, so he has to cope with a passionate and growing audience who are increasingly filling benches and often conflate politics with sports.

“They’ll show you who they’re rooting for,” he said. Shaping a star at Madonna

As a student at Star, Bazzi was already getting recognition from schools like the University of Michigan and Michigan State, both of which expressed interest in offering him full-ride scholarships. Central State University in Ohio and Alabama A&M University also reached out to him.

But in his sophomore year, he suffered an injury resulting in a torn ACL and took a year off from playing basketball to recover from surgery.

But he noticed recruitment had gotten quieter. Division I schools were no longer expressing interest in him.

Then when Madonna University, a Division II school, came knocking on his door, Bazzi felt a sense of relief.

He said he only knew of one other Arab student who attended Madonna on a basketball scholarship.

Bazzi said transitioning from high school to college level basketball was tough, but he adapted fast enough to perform well during his second season there.

He attributed some of that to the resources available, like athletic trainers and conditioning coaches.

“But when you come in as a freshman, you’re at the bottom of the totem pole,” he said.

Bazzi said when he got to college he realized that everybody on the court is quick, whether they’re 7′ tall or 5’11”.

He said there was a lot of bumping heads with other players and that being an Arab American set him apart from other teammates.

He often would not participate in social occasions like partying or going out for drinks.

However, he said his coach would always make sure the team went out to eat at restaurants that served fish and catered to his Halal dietary restrictions. During Ramadan, practices were held in the late evening to accommodate his fasting schedule.

Bazzi said he’s had mainly pleasant conversations with his teammates about his religion, despite the occasional bigoted comment he’d overhear.

He didn’t let those comments get to him, but said he’d play extra hard on the court “to make sure he kind of regrets saying that to me.”

Eye on the ball

Bazzi’s weakness was his speed, but what sets him apart is his craft and ability to shoot the ball from any point on the court.

He has been dribbling the ball since he was 3-years-old. His brother was a champion basketball player during his junior year at Star International Academy and won a scholarship to play at Concordia University in Ann Arbor.

Ever since sixth grade, Bazzi would watch his brother dominate the court. He said his brother’s perseverance instilled in him the importance of devoting yourself to your work.

Bazzi added that he finds a safe haven in playing basketball.

“You forget everything, and it shows you how far you can go,” he said.

In the summer, he would make his mother drop him off at the Ford Community & Performing Arts Center, where he would shoot the ball from 8 a.m. until his mother got off work at 5 p.m.

That’s where he honed his skills.

But it wasn’t until he realized his obsession was basketball that he decided to pursue it as a career.

“The only way you can possibly succeed and exceed expectations is to be utterly obsessed with one thing,” Bazzi said. “And if that’s a basketball, I’m perfectly fine with it.”

His brother also introduced him to Ali Sayed, founder of HYPE Athletics, a recreation and fitness community center in Dearborn Heights.

There, Bazzi played with the Amateur Athletic Union every summer for about five years, where they would travel and play around the country.

He said Sayed had a major impact on his life and saw potential in him, “when nobody else did.”

As training gets tough, Bazzi said he recalls something the coach would say that stuck with him throughout the years.