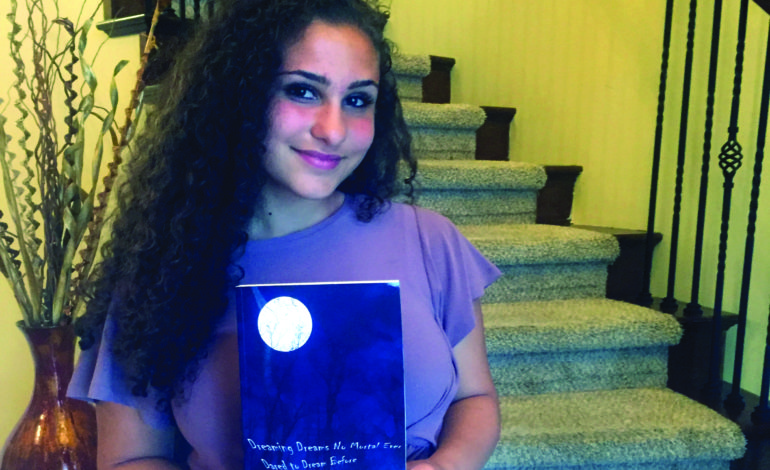 Maya Audi, 15, was published in two books while still in high school - Photo by Sarah Kominek / The AANews

DEARBORN – Maya Audi, a 15-year-old sophomore at Dearborn High School, has her eyes set on becoming an author.

In April 2016, Audi and her mother entered her story “The Raven Gem” in the National Endowment for the Arts’ (NEA) Big Read Dearborn, hosted by the Dearborn Public Library.

In partnership with Arts Midwest, the NEA’s initiative aims to showcase contemporary stories with a diverse set of perspectives. The Big Read takes submissions from authors of all ages who are inspired by various works of previously published literature.

The Big Read selected Audi’s story and published it in its book entitled “Dreaming Dreams No Mortal Ever Dared to Dream Before.”

“All my life I’ve been a big reader,” Audi said. “I love creating, and it just called me in a way.”

Her first published story is about two treasure hunters named Matthews and Daniels who search for a fictitious cursed gem belonging to Edgar Allan Poe’s wife.

Audi said her most recent story, “The Change of Fear”, is based on the stories her parents told her about people they knew and their own experiences emigrating from Lebanon between 1999 and 2000.

The protagonist, Saeed, emigrates from Lebanon with his mother and younger siblings, leaving behind his father and older brother.

“Saeed had to work for his family and support them,” Audi said. “Some days they went without food and it was really hard for them. They didn’t have a car and had to take the bus. He made his way through high school and college while supporting his family.”

Audi said she named her main character after her grandfather, although most of the stories come from her father.

“The Change of Fear” will be published in this year’s Big Read Dearborn’s book of collected works called “What’s in a Name?” The stories in this year’s book are inspired by “The Namesake” by Bengali American author Jhumpa Lahiri. It explores cultural identity and assimilation.

“When she was young, she loved to read,” said Audi’s mother, Laura Audi. “She was very curious; she wanted to read everything she got into her hands. We started encouraging her and taking her to the library. Her dad bought her books, and every time she read one he would tell her to write a summary. He also told her to write her dreams.”

Laura Audi said her husband, Khalil Audi, had a big influence on their daughter’s affinity for literature.

“He always wanted one of his kids to be an author,” she said. “But it was already in her.”

She added that Maya even got her 11-year-old brother, Ali, who attends Wise Academy in Dearborn Heights, into reading and writing.

“Now he wants to be an author,” she said.

Although Maya Audi loves writing, being an author isn’t her only aspiration.

“I’m going to go into the medical field,” she said. “I want to be a dentist or orthodontist. But I definitely want to keep writing.”

She has a myriad of other interests to fill her time when she isn’t reading or writing. She plays varsity tennis at Dearborn High and used to play soccer and basketball. She started playing piano nine years ago. She loves to play classical music, movie soundtracks and modern pop songs.

She also likes to draw and has a large portfolio of images of her friends, favorite sports players and music artists. She even has a few drawings of the characters in her stories.

Audi is currently working on a novel about a female Lebanese immigrant, which she hopes to have finished and published sometime next year.