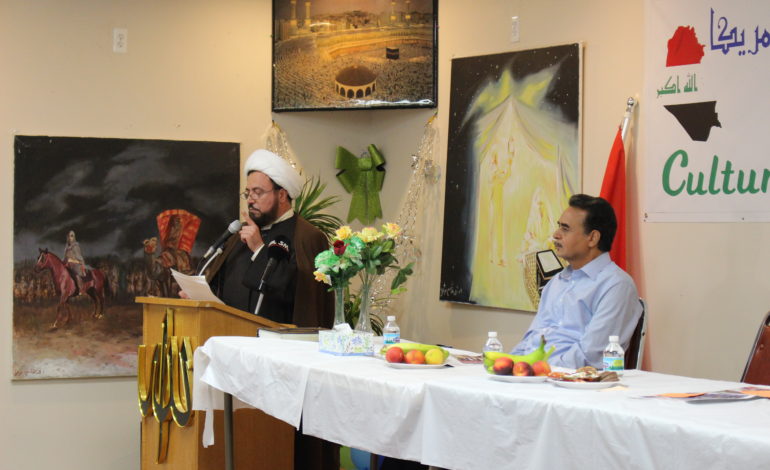 Husham Al-Husainy, head of the Karbalaa Islamic Education Center, speaks to community members at the center, July 19 - Photo by The AANews

DEARBORN – After a successful ousting of ISIS insurgents and a democratically-held election, Iraq’s situation seemed to be on an uptick. But in the midst of a transition in government, ongoing political corruption, a worsening economy, few jobs and scarce electricity have sparked massive protests across the oil-rich county’s south, now in their second week.

The wave of “uprisings” – as many have called it – began on July 8 in Basra, Iraq’s third-largest city with a Shi’a majority and the center of 80 percent of the country’s oil production, and have spread to other cities, including Baghdad, Amrah, Nasiriyah, Samawa, Najaf and Karbala.

Eight demonstrators have been killed and hundreds have been wounded so far by riot police, who are also deploying water cannons, wielding batons and carrying out arrests. Some residents have remained peaceful, while others have infiltrated and set fire to government buildings and damaged roads and other infrastructure.

The protesters are voicing their disenchantment with a government— led by Prime Minister Haider al-Abadi and his Dawa Party— that has largely forgotten about them for 15 years, since al-Abadi came to power after the 2003 U.S.-led war on Iraq toppled Saddam Hussein’s regime.

A recount of Iraq’s May 12 parliamentary election and the formation of a coalition of various minority parties are underway, which will determine if al-Abadi would remain the prime minister or be replaced.

On top of the widespread unemployment, undrinkable water and prolonged electricity and Internet outages, the country’s oil-hub is suffering brutal heat waves hovering at about 130 degrees Fahrenheit.

Al-Abadi responded by visiting Basra on July 13, where he promised to give $3 billion to improve services and add 10,000 jobs to the market. As he left, his protesters stormed his hotel – underscoring the little faith residents have in the government.

After 15 years and the billions of dollars lost, people have had enough.

Iraqi Americans in Metro Detroit have been engaged in their own struggles, as the Trump administration continues to unfurl its hardline immigration policies and ICE agents comb through neighborhoods to deport those with criminal records. Things began to look brighter when Iraq was removed from the list of Muslim-majority nations on the “travel ban” and when a federal judge in Detroit issued orders that granted more protections for deportees and detainees.

Although oceans apart and despite divisive politics, Dearborn’s high concentration of Muslim Iraqi Americans are largely worried that their homeland is being engrossed in “chaos” – diminishing chances of visiting and communicating with family.

In Detroit, a handful of Iraqi locals demonstrated in solidarity with the protesters in Iraq and criticized the dismissive tone al-Abadi’s administration has taken in responding to their demands. 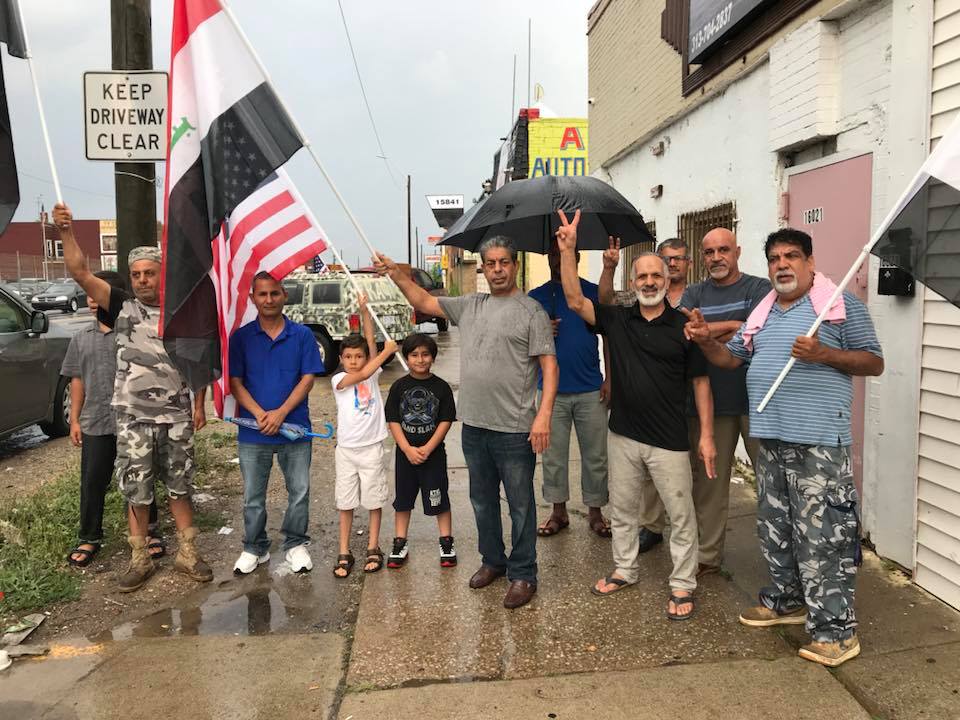 Protest co-organizer and activist Imad Jasim described the government’s stance of the demonstrations as “shameful.”

“We have called on the vigil to express solidarity with our people in Iraq and to support their legitimate rights,” said. “We called on the army and the security forces to protect the demonstrators instead of suppressing them. The government of Abadi has won regional and international support. However, during the last four years it has failed to reform the deteriorating situation.”

Mohamed Bakir Muhyedeen, a Dearborn-raised Iraqi American who works as a policy intern for the Iraqi Embassy in Washington, D.C., told The AANews that although most community members sympathize with peaceful Iraqi protesters and the need for the government to remedy their concerns, Iraqi Americans are fearful violent demonstrations will lead to “chaos” and make it easier for countries like Israel and Saudi Arabia to benefit from the turmoil.

“We are looking for a change and to fix the most corrupt government in the world,” he said. “After 15 years and the billions of dollars [lost], people have had enough.”

Muhyedeen pointed to the billions of dollars missing from Iraq’s budget since 2003 and alleged forged contracts with Gulf entities.

He recently returned from a visit to Iraq and said he’s been in contact with friends in Basra and Najaf, who are having to endure electricity, Internet and telephone services that barely last two hours and unbearable heat. Those circumstances are making it difficult for him to communicate with family as well.

“For an oil rich country, they should be able to fix the power grid,” he said.

Jafar Almosawi, a Detroit-based reporter at Al Iraqiya, Iraq’s national television network, told The AANews that most Iraqi Americans see the protests as warranted and lauded their efforts in getting the government’s attention, which resulted in promises to improve services.

“It’s a step in the right direction,” Almosawi said.

He added that some Iraqi Americans didn’t foresee the demonstrations wreaking havoc. Some traveled to Najaf and were not able to return as protesters attacked the airport there, halting air traffic.

Husham Al-Husainy, head of the Karbalaa Islamic Education Center, where many local Iraqis congregate, told The AANews that most Iraqi nationals and Iraqi Americans agree that the Iraqi government’s structure should change to become more transparent and democratic, with a more stable economy, but divisions arise about how it should be done.

“There is a lot of bureaucracy, abuse of power and toward the nation’s wealth and a lot of oppression,” Al-Husainy said.

He added that sour sentiments exist because Iraq’s southern communities have largely been neglected by both the old and new governments. Disagreements among Iraqis in that country and in the U.S. persist due to political tug-of-wars between factions and their supporters over the election results, who should rightfully gain power and the prospect of foreign intervention in Iraqi politics.

Al-Husainy said some Iraqis are concerned the unrest would ensure an unstable environment, allowing Saudi Arabia, which he accused of helping fund ISIS, to come back to Iraq in another form. Israel could also benefit by dissolving the likelihood of Arab unity and chances of liberating the Golan Heights.

He dismissed the prospect of Iranian influence, although he acknowledged President Trump’s decision to pull the U.S. out of the Iran Nuclear Deal and ensuing sanctions will force the country to seek other markets to which to export its oil.

In Metro Detroit, Al-Husainy said some Iraqi Americans still long for a government as it was led by Saddam Hussein and some support the Ba’athist Party, which was led by the toppled dictator.

“The community is frustrated with what’s going on,” he said.

On July 19, the Karbalaa Center held a community meeting where religious leaders urged attendees to be united in their message of standing with the Iraqi people’s strife and of denouncing violence and terrorism.