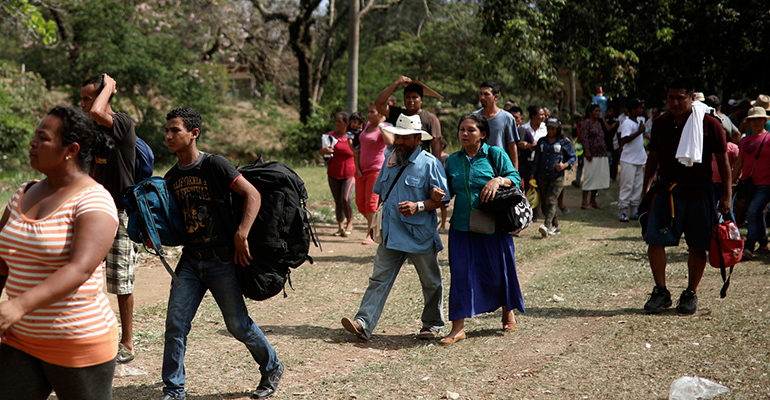 In recent years, state and gang violence — coupled with extreme poverty — have forced hundreds of thousands of people to flee El Salvador, Guatemala, Nicaragua and Honduras, among other countries in Central and South America. U.S. mainstream media, however, are rarely interested in the root cause of that reality.

Watching the ongoing debate between U.S. liberal and right-wing pundits in U.S. mainstream media, one rarely gets the impression that Washington is responsible for the unfolding crisis in Central America.

In fact, no other country is as accountable as the United States for the Central American bedlam and resulting refugee crisis.

So why, despite the seemingly substantial ideological and political differences between right-wing Fox News and liberal CNN, are both media outlets working hard to safeguard their country’s dirty little secret?

In recent years, state and gang violence — coupled with extreme poverty — have forced hundreds of thousands of people to flee El Salvador, Guatemala, Nicaragua and Honduras, among other countries in Central and South America.

U.S. mainstream media, however, are rarely interested in the root cause of that reality.

Fox News is tirelessly peddling the offensive language used by President Trump, which perceives the refugees as criminals and terrorists who pose a threat to U.S. national security.

At a press conference in October, Trump urged a reporter to take his camera into “the middle” of a caravan of migrants on the treacherous journey through Mexico, to locate “Middle Eastern” people who have infiltrated the crowd. In Trump’s thinking, “Middle Eastern people” are synonymous with terrorists.

CNN has, on the other hand, labored to counter the growing anti-immigrant official and media sentiments that have plagued the U.S., a discourse that is constantly prodded and manipulated by Trump and his supporters.

However, few in the liberal media have the courage to probe the story beyond convenient political rivalry, persisting in their hypocritical and insincere humanitarianism that is divorced from any meaningful political context.

The ongoing conflicts in Iraq, Libya and Syria are all, in varied degrees, outcomes of American military interventions, a truth that does not seem to register in the self-absorbed minds of both right-wing and liberal intellectuals

The fact is that the Central American refugee crisis is similar to the plethora of Middle East and Central Asian refugee crises of recent years. Mass migration is almost always the direct outcome of political meddling and military interventions.

From Afghanistan, to Iraq, Libya and Syria, millions of refugees were forced, by circumstances beyond their control, to seek safety in some other country.

Millions of Iraqis and Syrians found themselves in Lebanon, Jordan or Turkey, while a far smaller number trickled to Europe, all seeking safety from the grinding wars.

Political opportunists in Europe are no different from their American counterparts. While the former have seized on the tragedy of the refugees to sow seeds of fear and hate-mongering, Americans, too, have blamed the refugees for their own misery.

Blaming the victim is nothing new.

Iraqis were once blamed for failing to appreciate Western democracy, Libyans for their failed state, Syrians for taking the wrong side of a protracted war, and so on.

Yet, the ongoing conflicts in Iraq, Libya and Syria are all, in varied degrees, outcomes of military interventions, a truth that does not seem to register in the self-absorbed minds of both right-wing and liberal intellectuals.

The irony is that the hapless refugees, whether those escaping to Europe or to the United States, are perceived to be the aggressors, the invaders, as opposed to the U.S. and allies that had, in fact, invaded these once stable and sovereign homelands.

Trump has often referred to the Central American migrants’ caravan as an “invasion.” Fox News parroted that claim and injected the possibility of having the refugees shot upon arrival.

If Fox News lacked the decency to treat refugees as human beings deserving of sympathy and respect, CNN lacked the courage to expand the discussion beyond Trump’s horrid language and inhumane policies.

To expand the parameters of the conversation would expose a policy that was not introduced by Trump, but by Bill Clinton and applied in earnest by George W. Bush and Barack Obama.

Media grandstanding aside, both Democrats and Republicans are responsible for the current refugee crisis.

In 1996, Democratic President Clinton unleashed a war on refugees when he passed two consecutive legislations: The Illegal Immigration Reform and Immigrant Responsibility Act and the Anti-Terrorism and Effective Death Penalty Act.

Millions of people — who had escaped U.S.-instigated wars and military coups — were deported back to Central and South America. While 2 million people were deported during the Bush terms, 2.5 million were deported under Obama.

A terrible situation was exacerbated. Violence and want flared even more.

To rally his angry and radicalized constituency, Trump waved the migrant card once more, threatening to build a “great wall” and to close “loopholes” in the U.S. immigration law.

Like his predecessors, he offered little by way of redressing an unjust reality that is constantly fomented by destructive U.S. foreign policy, stretching decades.

But the refugees kept on coming, mostly from Central America’s Northern Triangle region. Without proper political context, they, too, were duly blamed for their hardship.

Considering Fox News and CNN’s lack of quality coverage, this is not surprising. Few Americans know of the sordid history of their country in that region, starting with the CIA-engineered coup d’état in Guatemala in 1954, or the U.S. support of the coup against the democratically-elected president of Honduras, Manuel Zelaya, in 2009 or of everything else that happened in between these dates.

The unhealthy relationship between the U.S. and its southern neighbors goes back as early as 1904, when President Theodore Roosevelt declared the “right” of his country to hold “international police power” in Latin America. Since then, the entire region has been Washington’s business.

The free trade agreement (CAFTA-DR) signed between Central American countries and the U.S. has done its own share of damage. It “restructured the region’s economy and guaranteed economic dependence on the United States through massive trade imbalances and the influx of American agricultural and industrial goods that weakened domestic industries,” wrote Mark Tseng-Putterman in Medium.

Acknowledging all of this is threatening. If U.S. mainstream pundits accept their country’s destructive role in Central and South America, they will be forced to abandon the role of the victim (embraced by the right) or the savior (embraced by the left), which has served them well.

The same stifling political and intellectual routine is witnessed in Europe, too.

But this denial of moral responsibility will only contribute to the problem, not to its resolution. No amount of racism on the part of the right, or crocodile tears of the liberals, will ever rectify this skewed paradigm.

This is as true in Central America as it is in the Middle East.