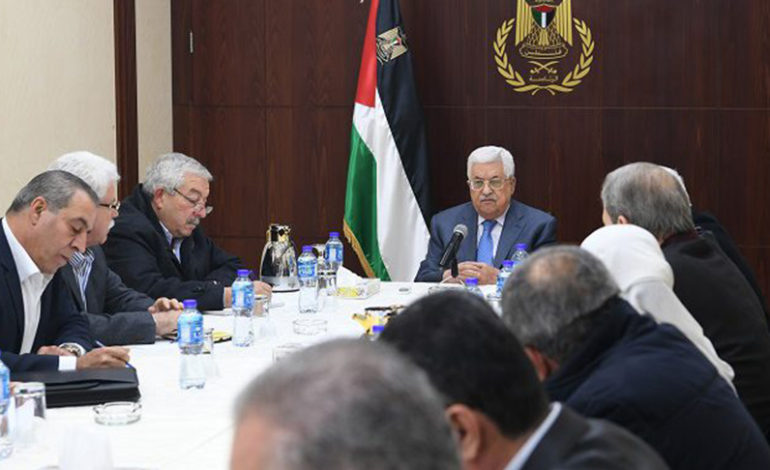 Mahmoud Abbas heads a meeting of the Palestinian Authority government in Ramallah. (Photo: via Wafa, file)

The “State of Palestine” has officially been handed the chairmanship of the G-77, the United Nations’ largest block. This is particularly significant considering the relentless Israeli-American plotting to torpedo the Palestinian push for greater international recognition and legitimacy.

It is now conclusive that the main mission for the former United States Ambassador to the U.N., Nikki Haley, was an unmitigated failure.

When Haley gave her infamous speech before the pro-Israel lobby, AIPAC, in March 2017 — declaring herself the “new sheriff in town” on behalf of Israel — the U.S.-Israeli designs were becoming clearer: Never again will the U.S. shy away from defending Israel at the U.N. as the previous Obama administration had done in December 2016.

In retrospect, Haley’s tactics — the aggressive language, the constant threats and outright political bullying — amounted to nothing. Her short stint of two years at the U.N. has only managed to, once again, accentuate dwindling U.S. power and influence on the international stage.

Instead of isolating Palestinians, the U.S. ended up joining Israel in its own isolation. Unable to make any tangible “achievements” in favor of Israel, a frustrated U.S. administration carried out its threats as it quit crucial U.N. bodies like UNESCO and the Human Rights Council, among others. In doing so, the U.S. is now imprudently dismantling the very international order it helped create following World War II.

The Palestinian Authority, on the other hand, has taken full advantage of the obvious shift in world order. Being voted to the helm of the G77 — which bonds 134 countries from the South in a massive economic order — is an extraordinary event.

But what does this mean in terms of the Palestinian quest for statehood?

The PA seems to operate within two separate — and often contradictory — political spheres.

On the one hand, it is in full cooperation with Israel in terms of “security coordination”, at times serving as if Israel’s policeman in the occupied West Bank. Its constant crackdown on Palestinian dissent and its monopolization of Palestinian decision-making have been major obstacles before the Palestinian people in their fight for rights, justice and freedom.

On the other hand, the PA has been pursuing a determined path towards international recognition, starting with its successful bid to obtain a non-member observer status for the State of Palestine in November 2012.

That momentous event, which took place despite U.S.-Israeli strong rejection and protests, opened up the door for Palestine to join various U.N. organizations such as the International Criminal Court.

Palestine is yet to acquire full U.N. membership, a pursuit that is being renewed at the moment. However, as of August 2015, the flag of Palestine has been fluttering at the U.N. headquarters, along with those of 193 other nations.

So how is one to reconcile between these two realities?

It goes without saying that the international support Palestine is receiving at the U.N. is an outcome of existing solidarity and sympathy with the Palestinian people and their rightful struggle for human rights and independence. It has preceded the PA by decades and will be there for many years to come.

The PA, however, has tactfully translated this international support and validation to political assets among Palestinians at home.

Indeed, much of the support that the PA and its dominant Fatah party continue to enjoy among ordinary Palestinians is driven by the following logic: Every symbolic diplomatic “victory” achieved by the PA abroad is followed by massive celebrations in Ramallah, fiery speeches of an imminent freedom and statehood.

But freedom, of course, remains elusive, partly because the PA is yet to develop a real strategy for resisting Israeli military occupation and colonization. Its determination and vigor to acquire more international recognition is juxtaposed with utter laxity and disinterest in developing a unified national strategy in Palestine itself.

This points to an unmistakable conclusion: The PA’s strategy is merely focused on the very survival of the PA as a political apparatus, and on “Palestinian independence” within an immaterial diplomatic sphere, without any tangible evidence of that “independence” on the ground.

How else can one explain the fierce fight, in the name of Palestine and those suffering in Gaza, put up by PA President Mahmoud Abbas and his ambassador, Riad al-Maliki, at the U.N., while the PA continues to withhold salaries from besieged Palestinians in the Gaza Strip?

The sad truth is that the fight for Palestinian recognition at the U.N. is, at its core, a fight for Abbas and his Authority to remain relevant, and solvent, in a changing international political order.

Meanwhile, for Palestinians, Abbas’ diplomatic achievements represent the proverbial morphine shots injected in the collective vein of an occupied and suffering people, desperate for a ray of hope.

According to the General Federation of Palestinian Trade Unions, poverty in the Gaza Strip has exceeded 80 percent, coupled with a 54.9 percent level of unemployment. The West Bank, too, is suffering, with the Israeli army and violent illegal Jewish settlers terrorizing the Palestinian population there. Thousands of Palestinian men and women languish in Israeli jails, hundreds of them held without trial.

Not only has the PA done little to challenge — or, at least, attempt to reverse — that reality, it has, at times contributed to it. Yet, oddly, the PA’s pitiful political discourse in Palestine is contrasted with a well-defined, articulate and purportedly courageous language outside.

In fact, this is the crux of the PA strategy at the moment. Knowing that it has little legitimacy among ordinary Palestinians, the PA is desperate to find an alternative source of legitimacy somewhere else.

While a greater support for the “State of Palestine” is a positive sign indicating a changing world order, it is, sadly, used by the Palestinian leadership to sustain its own oppressive, futile and corrupt political gambit.