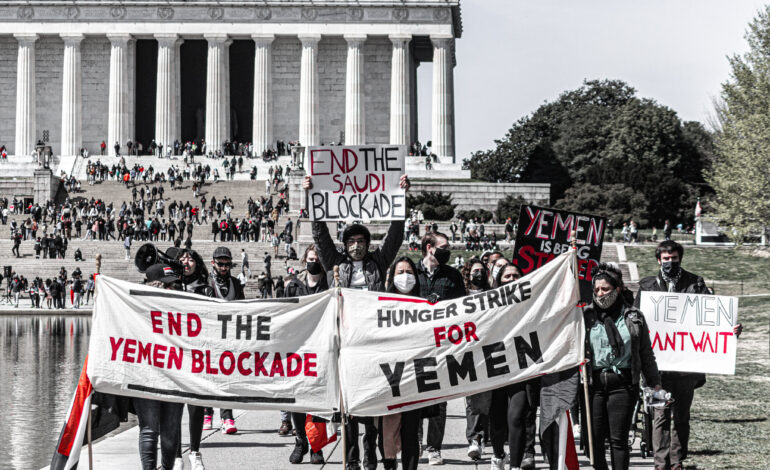 Activists from the Yemeni Liberation Movement (YLM) and other organizations march at the Lincoln Memorial in Washington, D.C., April 3. All photos: Laura Albast

Activists from the Yemeni Liberation Movement (YLM) and other organizations held a rally at the Lincoln Memorial in Washington, D.C. on Saturday. They carried banners calling for an end to the U.S.-backed Saudi blockade on the embattled country.

The five Michigan natives leading the action staged a hunger strike on March 29.

The first two days of the hunger strike were the hardest on 26-year-old Iman Saleh, the general coordinator for the YLM.

“My body was aching, I (felt) weaker,” Saleh said during a phone call a day before the rally. “This experience has really taught me about how people in Yemen go through malnutrition and starvation and I really wanted to show that to the world while also pushing for our demands to be met.”

Now on her ninth day, she is surviving on water, Pedialyte and broth.

The human toll in Yemen

In the wake of the Arab Spring, many Yemenis attempted to topple the authoritarian regime headed by Ali Abdulla Saleh. Saleh fled the country, leaving its fate to his vice president, Abdrabbuh Mansour Hadi, who in turn failed to address the population’s concerns. By 2014, Hadi’s weak regime faced the rise of the Houthis, a Shi’a rebel movement. 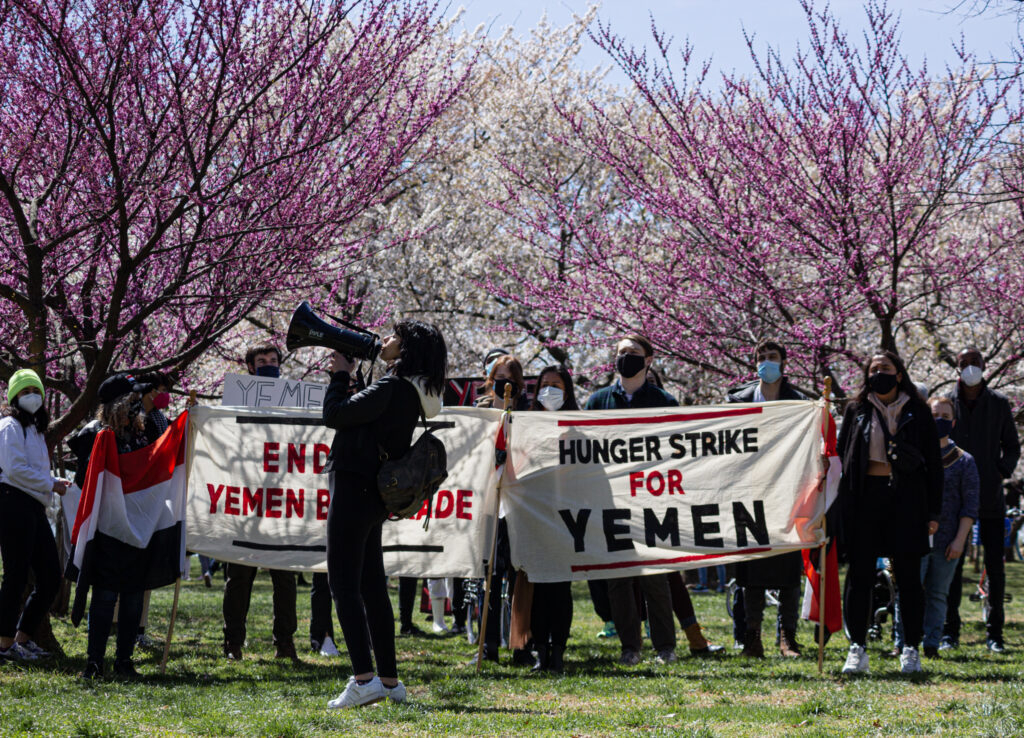 Demonstration at the National Mall in Washington, D.C., April 3

The humanitarian crisis began in 2015 when countries in the region, led by Saudi Arabia and supported by the U.S., launched airstrikes as part of a military intervention to prevent an Iran-backed Shi’a stronghold from forming in the region.

Last month marked six years since Saudi Arabia imposed a land, air and sea blockade on Yemen, purportedly to prevent the flow of weapons to Houthi rebels. What has in fact taken place is humanitarian devastation, with civilian populations being deprived of food staples, water and medical supplies. Ordinary citizens of Yemen have become collateral damage as Iran and Saudi Arabia stage a proxy war for geopolitical influence.

According to a U.N. report published in February, more than 2 million Yemeni children are projected to suffer from acute malnutrition this year. 400,000 of these are expected to die by the end of 2021.

The Yemeni Liberation Movement is a volunteer-led organization based in Michigan. It was founded last spring to educate and mobilize communities on the situation in Yemen.

When the blockade intensified, the YLM shifted its focus from awareness to action, demanding an end to the war. While the outbreak of the pandemic limited some activities, it was able to hold community rallies, a fundraiser and film screenings.

Monica Isaac, 42, is an organizer with the YLM who is also on hunger strike. She said that while some of the letters they sent to the U.S. Congress received positive responses, their outreach was not enough to put pressure on the Biden administration.

“We felt that our voices weren’t being heard (by) doing protests and writing letters,” Isaac said. “It was important for us to take a radical step forward to really get this out to the media and to the people and to (get) our demands met.” 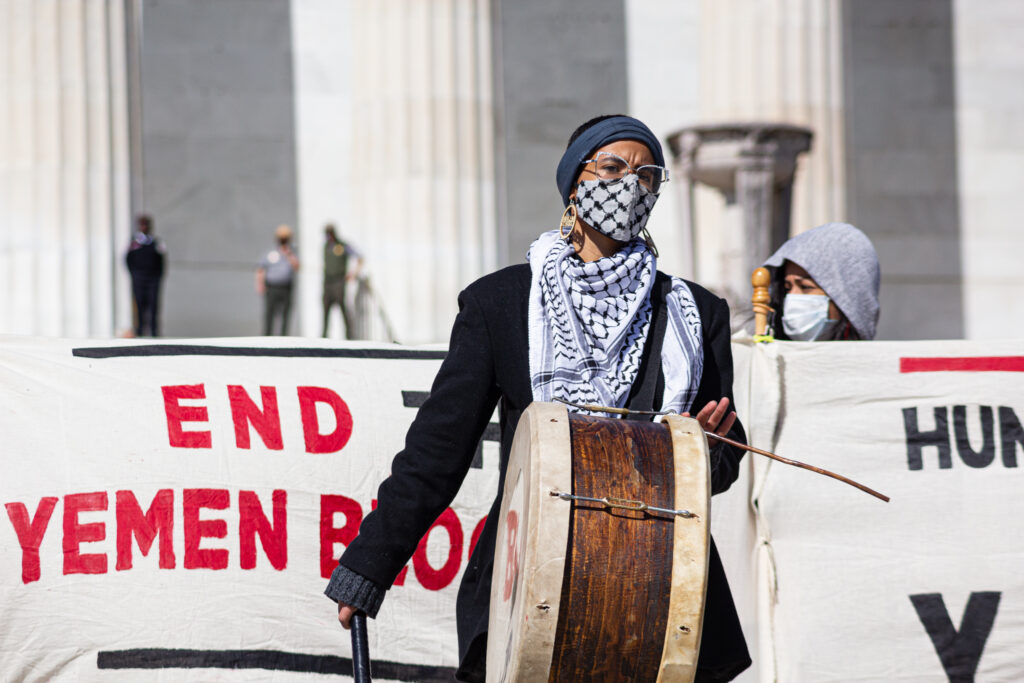 This experience has really taught me about how people in Yemen go through malnutrition and starvation and I really wanted to show that to the world while also pushing for our demands to be met — Iman Saleh, organizer

On February 4, President Biden announced an end to U.S. support of offensive military operations carried out by Saudi Arabia in Yemen. On February 12, his secretary of state revoked former President Trump’s designation of the Houthi rebel movement as a terrorist organization. The Biden administration has also announced that it is “considering” cancelling arms deals with the Gulf monarchy.

While Biden’s steps are promising, they remain ambiguous. Soon after he announced his intentions, 41 members of Congress wrote an open letter asking the president to provide more clarity on his Yemen policy by March 25.

The lawmakers asked about U.S. activities in Yemen, what constituted “offensive” support, whether the administration is going to block the delivery of arms sold to Saudi Arabia under the Trump administration and whether humanitarian aid will be increased.

The Biden administration has yet to respond to the congressional letter, sources told Aljazeera.

The U.S. has supported the Saudi-led coalition in Yemen since its inception more than half a decade ago, having been its largest supplier of arms.

While some European states like the Netherlands and Finland joined an arms embargo on Saudi Arabia in 2018, numerous other countries, including professed peacemakers like Canada, have doubled weapon sales to the Kingdom, supplying armaments that continue to contribute to the airstrike campaign in Yemen. 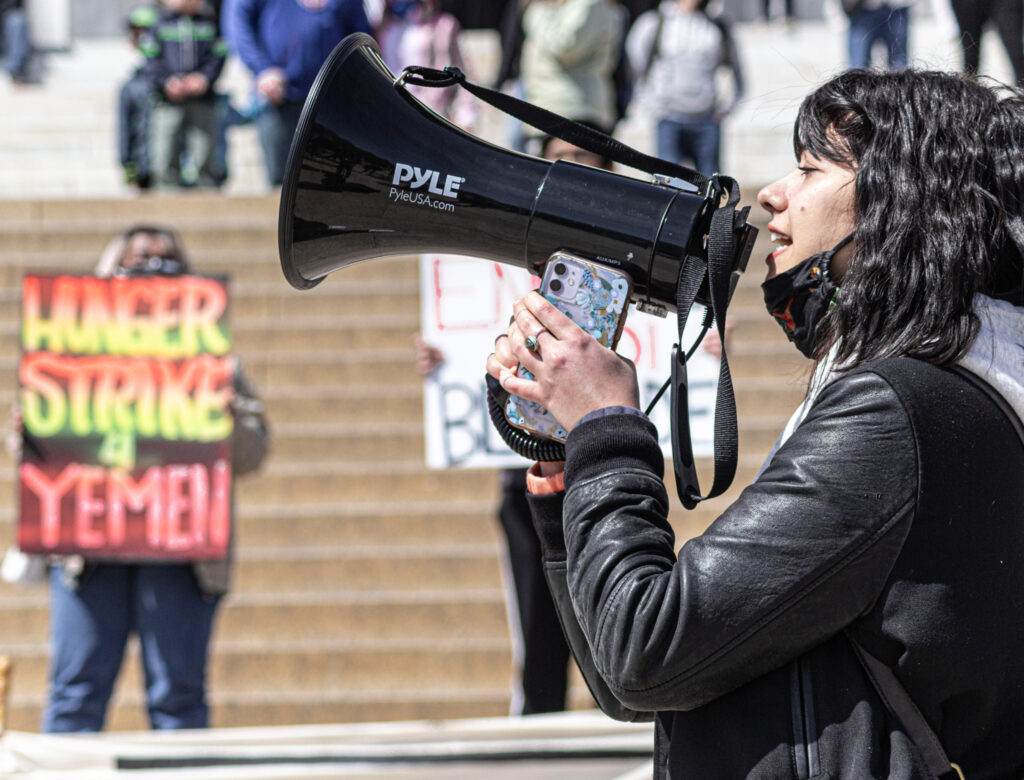 The value of taking action

The YLM activists have been finding it difficult to get American media to cover their strike.

“We need a lot of public pressure (to achieve) our goal of pushing the U.S. government to end the blockade,” Saleh said.

More than 30 people attended Saturday’s rally and 30 organizations have already endorsed the hunger strike. The YLM is holding parallel campaigns asking people to join the strike, sign its petition or send a letter to Congress.

“We have shouted, marched, asked for peace… as non-violent protest goes, a hunger strike wreaks the most havoc (on) the body and mind,” Saleh shouted through a megaphone on the steps of the Lincoln Memorial last weekend. “We are willing to undergo these risks in solidarity with the (millions of people in) Yemen who are being starved. We are no longer asking when Yemen will see peace; we are here to demand it.”

Laura Albast is Palestinian American and works at an NGO in Washington, DC. She holds degrees from the American University of Beirut and Boston University.