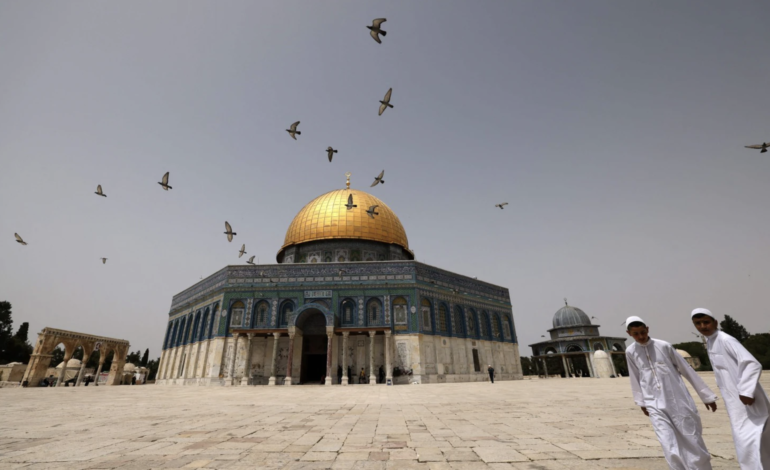 Palestinian Muslims walk in front of the Dome of Rock at the Al-Aqsa mosque in Jerusalem's Old City, occupied Palestine, April 17. Photo: AFP

Starting on April 15, the Israeli occupation army and police raided the Al-Aqsa Mosque in Occupied East Jerusalem on a daily basis. Under the pretense of providing protection to provocative “visits” by thousands of illegal Israeli Jewish settlers and right-wing fanatics, the Israeli army has wounded hundreds of Palestinians, including journalists, and arrested hundreds more.

Palestinians understand that the current attacks on Al-Aqsa carry deeper political and strategic meanings for Israel than previous raids.

Al-Aqsa has experienced routine raids by Israeli forces under various guises in the past. However, the significance of the Mosque has acquired additional meanings in recent years, especially following the popular Palestinian rebellion, mass protests, clashes and a war on Gaza last May, which Palestinians tellingly refer to as Saif Al Quds — Operation Sword of Jerusalem.

Historically, Haram Al-Sharif — or the Noble Sanctuary — has been at the heart of popular struggle in Palestine, as well as at the center of Israeli policies. Located in the Old City of Occupied East Jerusalem, the Sanctuary is considered one of the holiest sites for all Muslims. It has a special place in Islam, as it has been mentioned in the Holy Quran and frequently in the Hadith — the Sayings of Prophet Mohammed. The compound contains several historic mosques and 17 gates, along with other important Islamic sites. Al-Aqsa is one of these mosques. 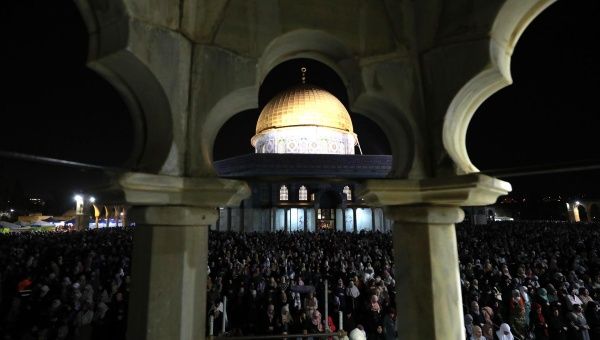 Palestinians attend a Laylat al-Qadr night prayer during the holy month of Ramadan at the Al-Aqsa Mosque compound in Jerusalem on April 27. File photo

Palestinians understand that the current attacks on Al-Aqsa carry deeper political and strategic meanings for Israel than previous raids.

But for Palestinians, the significance of Al-Aqsa has gained additional meaning due to the Israeli occupation, which, throughout the years, has targeted Palestinian mosques, churches and other holy sites. For example, during the 2014 Israeli war on the besieged Gaza Strip, the Palestinian Ministry of Endowments and Religious Affairs said that 203 mosques were damaged by Israeli bombs, with 73 being completely destroyed.

Therefore, Palestinian Muslims, but also Christians, consider Al-Aqsa, the Sanctuary and other Muslim and Christian sites in Jerusalem a red line that must not be crossed by Israel. Generation after generation, they have mobilized to protect the sites though, at times, they could not, including in 1969 when Australian Jewish extremist Denis Michael Rohan carried out an arson attack in Al-Aqsa.

The Jewish extremists are feeling increasingly empowered by the protection they are receiving from the Israeli military and the blank check provided to them by influential Israeli politicians.

Even the recent raids on the Mosque were not confined to the bodily harm and mass arrest of worshippers. On April 15, the second Friday of Ramadan, much destruction took place at Al-Aqsa, where the Mosque’s famous stained-glass windows were shattered and furniture inside was left broken.

The raids on the Haram Al-Sharif continue, at the time of writing of this article. The Jewish extremists are feeling increasingly empowered by the protection they are receiving from the Israeli military and the blank check provided to them by influential Israeli politicians. Many of the raids are often led by far-right Israeli Knesset member Itamar Ben-Gvir, Likud politician Yehuda Glick and former government minister Uri Ariel.

Israeli Prime Minister Naftali Bennett is undoubtedly using the raids on Al-Aqsa as a way to keep his often rebellious far right and religious constituency in line. The sudden resignation on April 6 of Idit Silman, a member of the Yamina right-wing party, left Bennett even more desperate in his attempt to breathe life in his fractious coalition. Once a leader of the Yesha Council, an umbrella organization of West Bank illegal settlements, Bennett rose to power on the back of religious zealots, whether in Israel or in the Occupied Palestinian Territories. Losing support of the settlers could simply cost him his post.

Bennett’s behavior is consistent with those of previous Israeli leaders, who have escalated violence in Al-Aqsa as a way to distract from their own political woes or to appeal to Israel’s powerful constituency of right-wing and religious extremists. In September 2000, then Israeli Prime Minister Ariel Sharon raided the Mosque with thousands of Israeli soldiers, police and like-minded extremists. He did so to provoke a Palestinian response and to topple the government of his archenemy Ehud Barak. Sharon succeeded, but at a high price, as his “visit” unleashed the five-year long Second Palestinian Intifada, also known as Al-Aqsa Intifada. 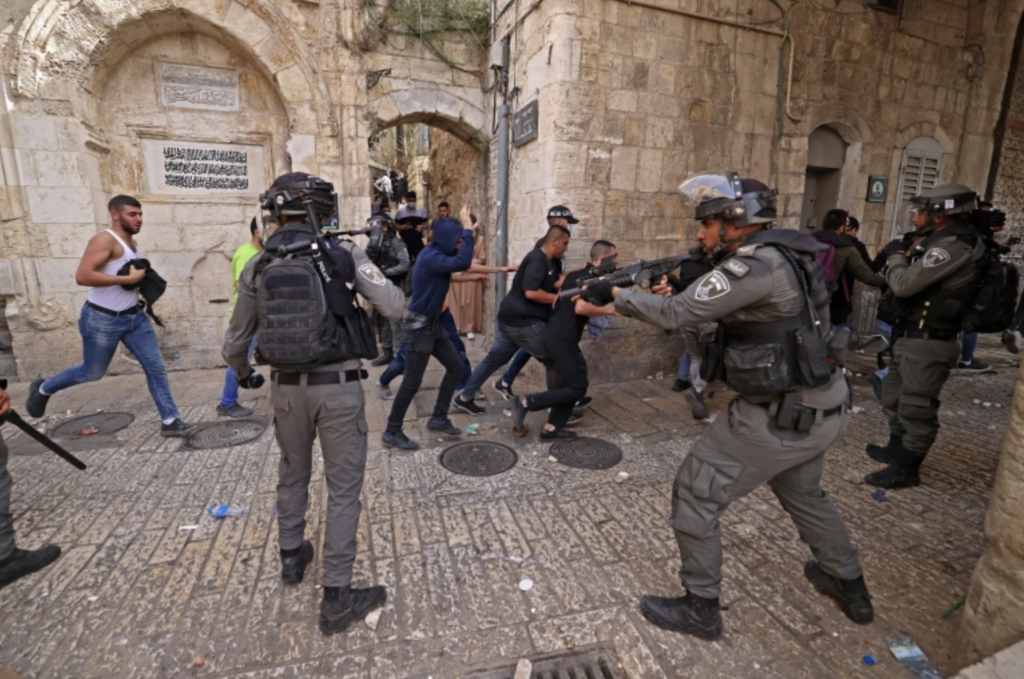 Bennett’s behavior is consistent with those of previous Israeli leaders, who have escalated violence in Al-Aqsa as a way to distract from their own political woes or to appeal to Israel’s powerful constituency of right-wing and religious extremists.

In 2017, thousands of Palestinians protested an Israeli attempt at installing “security cameras” at the entrances of the holy shrine. The measure was also an attempt by former Israeli Prime Minister Benjamin Netanyahu to appease his right-wing supporters. But the mass protests in Jerusalem and the subsequent Palestinian unity at the time forced Israel to cancel its plans.

Appealing to right-wing voters by attacking, humiliating and provoking Palestinians is no longer an easy task, as was often the case.

Following the killing of 29 worshippers in 1994 at the hands of an Israeli Jewish extremist, Baruch Goldstein, and the subsequent killing of many more Palestinians by the Israeli army at the Ibrahimi Mosque in Hebron (Al-Khalil), Israel partitioned the mosque. It allocated a larger space to the Jewish settlers while restricting access to Palestinians, who are allowed to pray at certain times and barred at others. This is precisely what Palestinians mean by temporal and spatial division, which has been at the heart of Israeli strategy for many years.

Bennett, however, must tread carefully. Palestinians today are more united in their resistance and awareness of the Israeli designs than at any other time in the past. An important component of this unity is the Palestinian Arab population in historic Palestine, who are now championing a similar political discourse as that of Palestinians in Gaza, the West Bank and East Jerusalem. In fact, many of the defenders of Al-Aqsa come from these very communities. If Israel continues with its provocations in Al-Aqsa, it risks another Palestinian revolt as that of May, which tellingly started in East Jerusalem.

Appealing to right-wing voters by attacking, humiliating and provoking Palestinians is no longer an easy task, as was often the case. As the “Sword of Jerusalem” has taught us, Palestinians are now capable of responding in a unified fashion and, despite their limited means, even put pressure on Israel to reverse its policies. Bennett must remember this before carrying out any more violent provocations.