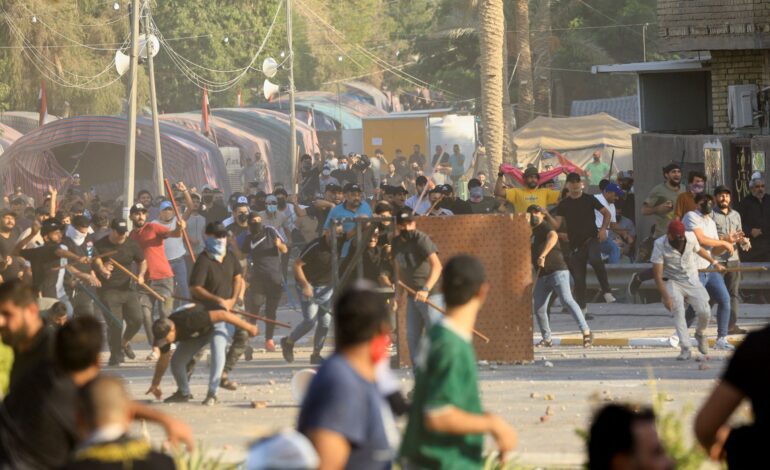 Supporters of Iraqi populist leader Moqtada al-Sadr clash with supporters of the Coordination Framework, a group of Shi'a parties, at the Green Zone in Baghdad, Iraq, Aug. 29. Photo: Thaier Al-Sudani/Reuters

BAGHDAD — Iraq is seeing a fresh wave of violence in a power struggle between the powerful Shi’a cleric Moqtada al-Sadr and Shi’a parties and paramilitary groups.

On Thursday, clashes among rivals in the Iraqi city of Basra killed at least four people, as violence from a worsening political crisis hit the south of the country.

Heavy clashes erupted in Baghdad earlier, killing almost 20 people on Monday, after Sadr said he would quit politics, prompting his loyalists to storm a government palace and fight with rival groups.

Both sides have tried to exert their control over the formation of a new government since an election in October. The struggle began with political moves in parliament and the judiciary, went to the streets as Sadr withdrew from the political process and staged protests during the summer, and then degenerated into violence at the end of August.

It has left Iraq, which is reeling from years of war, sanctions, civil strife and corruption, without a government for the longest period since the 2003 U.S. invasion.

The officials could not immediately identify the gunmen firing on the government buildings, but said they believed they were Sadr supporters.

The leader of one militia group and one of Sadr’s main Shi’a rivals, Qais al-Khazali, said in a statement that he was ordering all offices of his group closed and urging supporters not to retaliate if they were attacked.

In the southern city of Nassiriya, his followers raided a local headquarters for paramilitaries and seized cars and weapons, according to Sadrist and Iran-aligned security officials in the city. 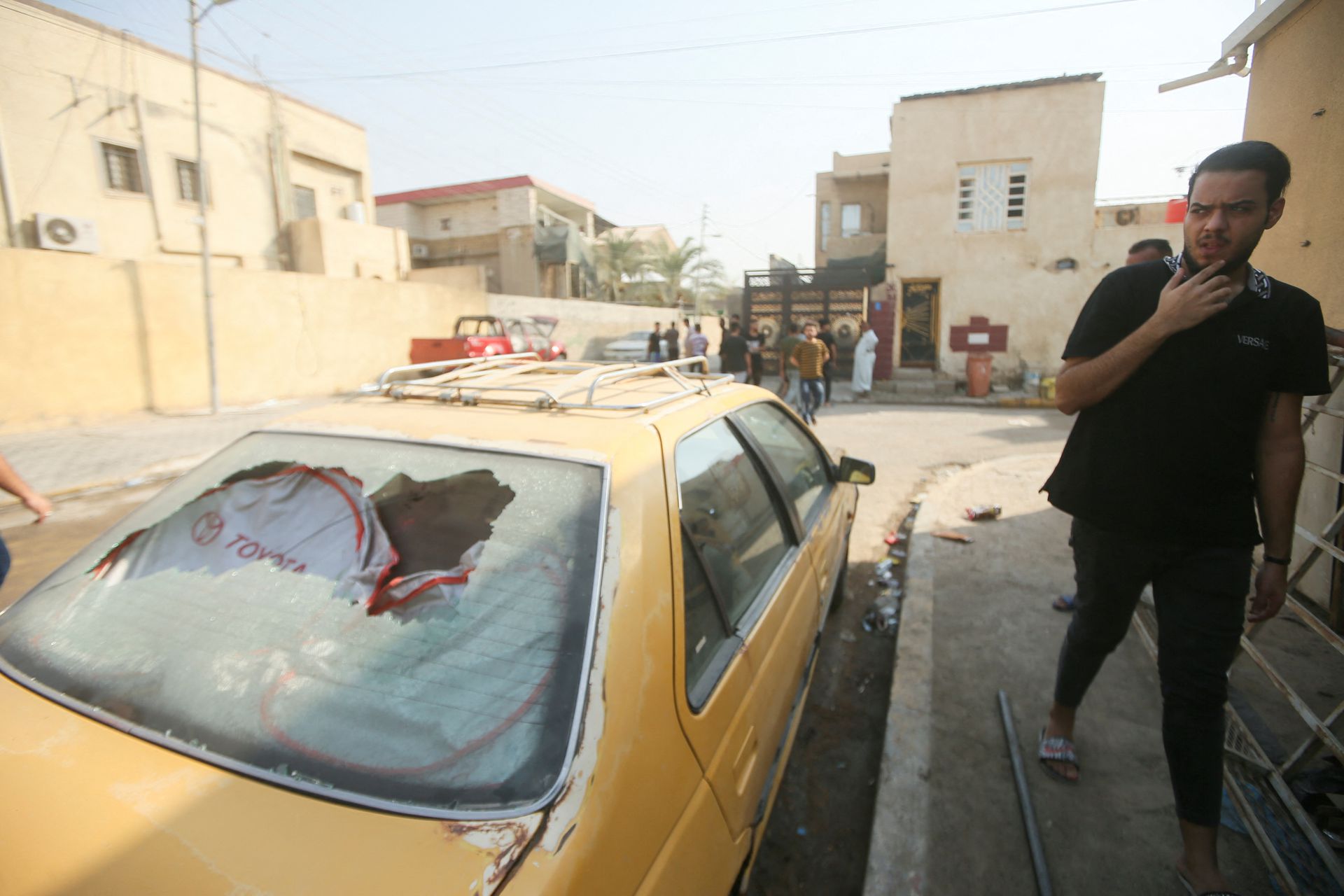 A man walks past a damaged vehicle on a street in the aftermath of clashes among rival Shi’a Muslim militants in Basra, Iraq, Sept. 1. Photo: Essam al-Sudani/Reuters

Earlier in the week, as night fell, machine-gun fire and explosions rang out, with tracer fire rising into the sky above the Green Zone that houses government headquarters and foreign embassies, in the worst fighting the Iraqi capital has seen in years.

It followed a day of violence prompted by Sadr’s announcement that he would withdraw from all political activity — a decision he said was in response to the failure of other Shi’a leaders and parties to reform a corrupt and decaying governing system.

Sadr later said he was staging a hunger strike in protest against the use of weapons by all sides.

A political standoff between Sadr and Shi’a Muslim rivals has sent Iraq spiraling into yet another round of violence as it struggles to recover from decades of war, sanctions, civil strife and endemic corruption.

Since 2003, Iraqi groups have engaged in sectarian conflict and, more recently, intra-sectarian, intra-ethnic political competition, since the U.S. invaded Iraq over no real justification, devastating the country.

The latest round of violence pits Sadr’s supporters, which include a heavily armed militia, against rival paramilitaries and the security forces.

Sadr’s win in an October election, his attempts to form a government free of Iran-backed groups, but also one that rejects U.S. influence, and his eventual withdrawal from parliament in favor of street protests and occupying government buildings to block political activity have all featured in the build-up of tensions that finally erupted into new violence on Monday.

Security officials said some of the clashes were between Sadr’s Peace Brigades fighters and members of the Iraqi security forces tasked with protecting the Green Zone, but that Iran-aligned militias were also likely to have been involved.

Reuters could not independently verify who was shooting at whom on Monday night.

Sadr announced earlier in the day he was quitting politics.

“I hereby announce my final withdrawal,” he said on Twitter, criticizing fellow Shi’a political leaders for failing to heed his calls for reform.

Sadr loyalists who had been occupying the parliament building for weeks then charged a government headquarters in the Green Zone, once a palace of dictator Saddam Hussein, where some jumped into a swimming pool at the palace, cheering and waving flags.

Clashes then took place between young men loyal to Sadr and supporters of the pro-Iran militias, who threw stones at each other near the Green Zone, before the nighttime armed fighting. 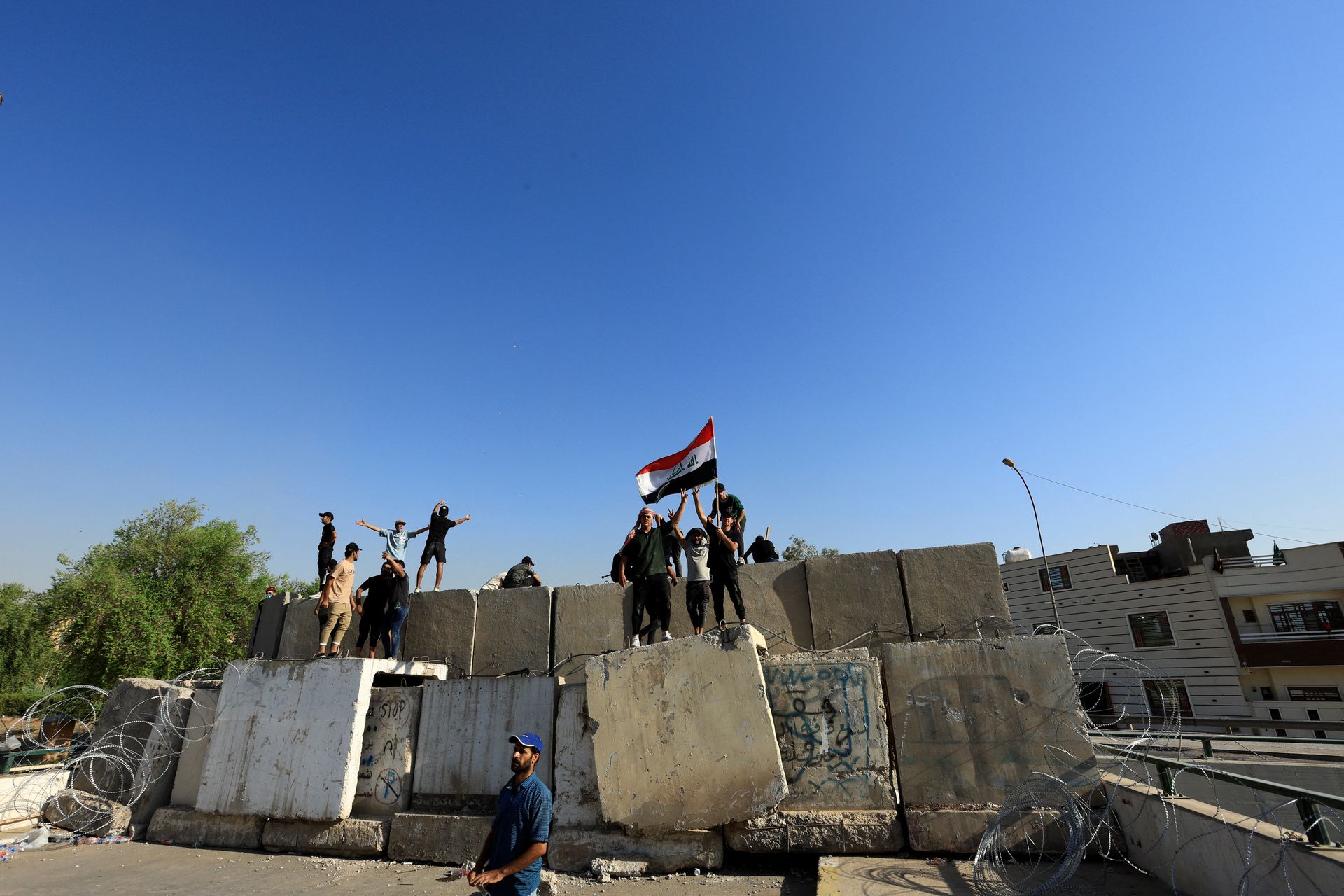 Sadr, who has drawn broad support by opposing both U.S. and Iranian influence on Iraqi politics, was the biggest winner in an October election, but withdrew all his lawmakers from parliament in June after he failed to form a government that excluded his rivals, mostly Tehran-backed Shi’a parties.

At least 17 people were killed and scores injured, police and medical workers said.

Iraq’s military declared an open-ended nationwide curfew and urged the protesters to leave the Green Zone.

Sadr, who has drawn broad support by opposing both U.S. and Iranian influence on Iraqi politics, was the biggest winner in an October election, but withdrew all his lawmakers from parliament in June after he failed to form a government that excluded his rivals, mostly Tehran-backed Shi’a parties.

Sadr has insisted on early elections and the dissolution of parliament. He says no politician who has been in power since the U.S. invasion in 2003 should hold office.

Many Iraqis worry that moves by each Shi’a camp could lead to new civil conflict.

“The (Iran) loyalists came and burned the tents of Sadrists, and attacked protesters,” said Kadhim Haitham, a supporter of Sadr.

Pro-Iran groups blamed the Sadrists for the clashes and denied having shot at anyone. “It’s not true — if our people had guns why would they need to throw rocks?” said one militia member, who declined to be identified by name.

Sadr has withdrawn from politics and the government in the past and has also disbanded militias loyal to him. But he retains widespread influence over state institutions and controls a paramilitary group with thousands of members.

He has often returned to political activity after similar announcements, although the current deadlock appears harder to resolve than previous periods of dysfunction and has given Iraq its longest run without a government.

Supporters of the mercurial cleric first stormed the Green Zone in July. Since then, they have occupied parliament, halting the process to choose a new president and prime minister.

Iraq, OPEC’s second-largest producer, has struggled to recover since the defeat of ISIS in 2017 because political parties have squabbled over power and its vast oil wealth. 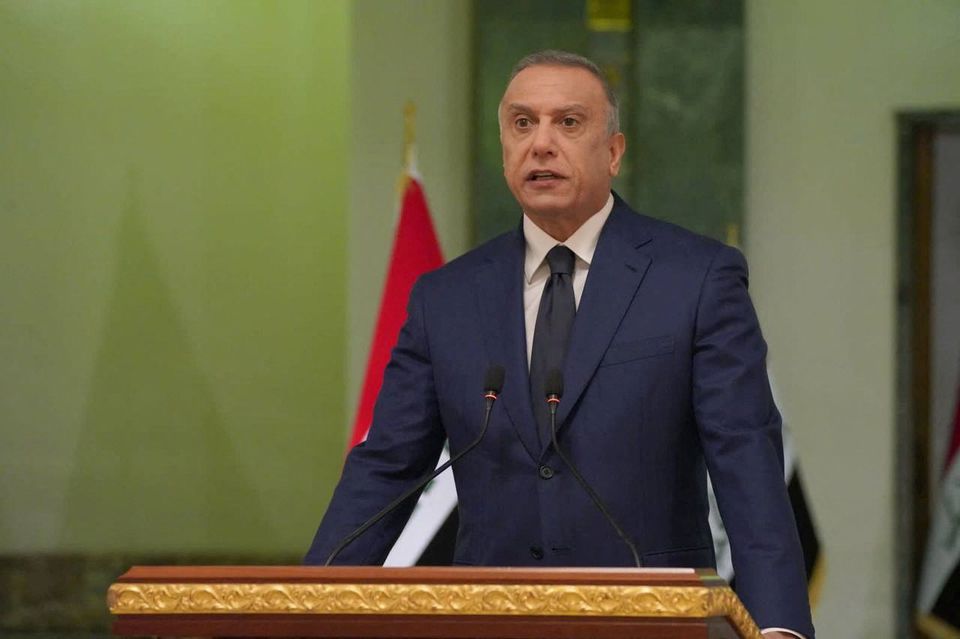 “The President commended Prime Minister Kadhimi’s personal leadership during escalating tensions and violence over a 24-hour period earlier this week,” the White House said in a statement after their call, adding the two leaders agreed to stay in touch in the coming weeks.

The violence cooled after Sadr ordered his followers on Tuesday to end their protests in central Baghdad. Apologizing to Iraqis after 22 people were killed in clashes between an armed group loyal to him and rival factions, Sadr condemned the fighting and gave his own followers orders to disperse.

Biden and the Iraq prime minister “welcomed the return of security to the streets” and called on local leaders to engage in dialogue in line with Iraq’s constitution, the White House said.

The recent clashes followed 10 months of political deadlock since the parliamentary elections and President Barham Salih has warned that the crisis is not over, calling for early elections.

The White House said that Biden “praised the performance of the Iraqi Security Forces and extended condolences to the families of those killed in the recent fighting.” The White House readout did not mention Sadr by name. 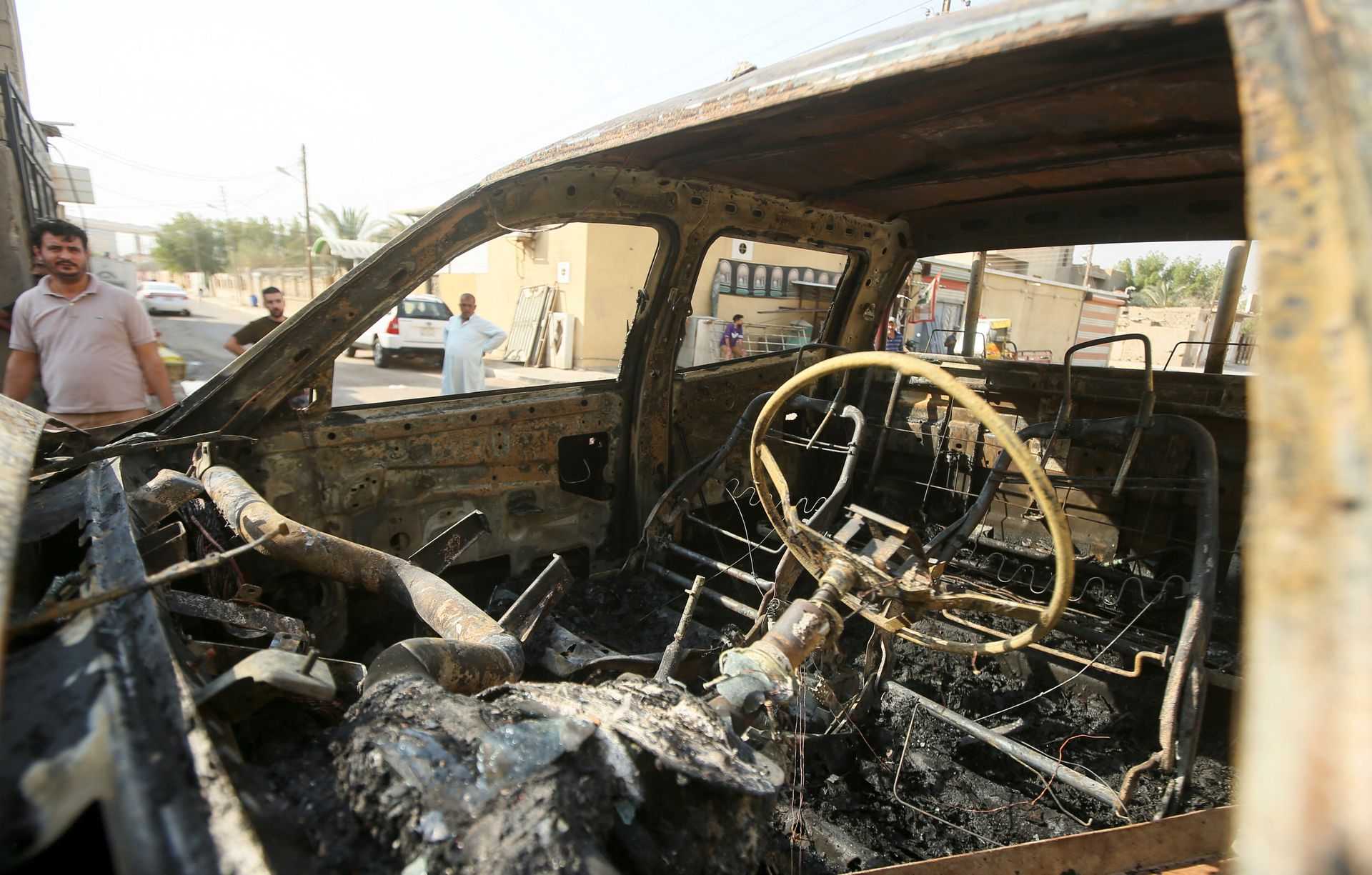 A burnt vehicle on a street in the aftermath of clashes among rival Shiite Muslim militants in Basra, Iraq Sept. 1. Photo: Essam al-Sudani/Reuters

— Reuters and staff. Edited for style.