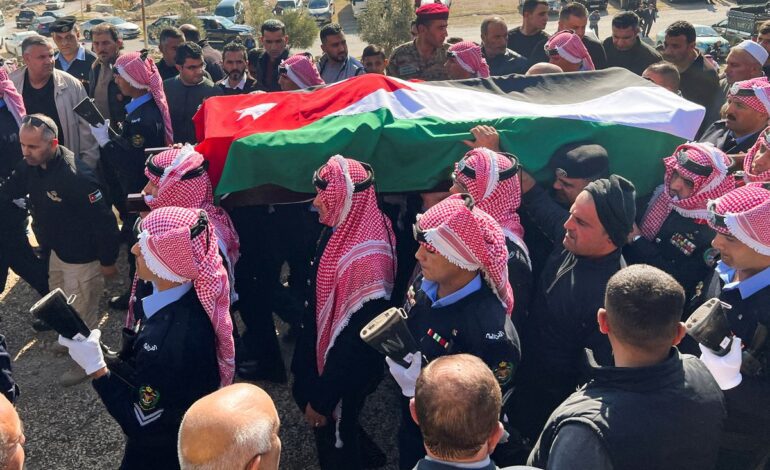 Jordanian security personnel carry the coffin of a senior police officer who was killed in riots on Dec. 15, according to authorities, in Jerash, Jordan, December 16. - Reuters

AMMAN — Jordanians staged sit-ins on Friday, Dec. 16 and activists called for more protests over fuel price increases that have added to a cost-of-living squeeze, a day after riots in a southern city left one police officer dead, witnesses and security sources said.

Authorities said the policeman was killed the night of Dec. 15 by a gunshot fired by an unidentified individual when armed officers entered a neighborhood of Maan to quell riots.

Tensions have mounted in Maan and several cities in southern Jordan in particular after sporadic strikes by truck drivers protesting against high fuel prices and demanding cuts in diesel prices.

“We have seen a large jump in violent acts,” he said. “After what happened, there will be tougher security measures to reinforce the security forces in the areas that witness such acts.”

Police said in a statement that 40 officers were wounded by gunshots last Thursday night and that protesters smashed cars. The force later said it had arrested 44 people in connection with the unrest.

Streets were quieter during the day on Friday, but sporadic protests continued with a sit-in in front of Maan’s main mosque and a mosque in the capital Amman after prayers, while activists called for more demonstrations.

By the evening, there were no reports of the full-blown confrontations seen the previous night when riot police chased scores of youths throwing stones in Amman, Zarqa, Irbid and other cities in some of the most widespread civil unrest seen in recent years.

In the most significant unrest, security forces used tear gas to disperse angry crowds in Zarqa city and protesters set fire to tires on highways in the southern city of Karak and several other towns, disrupting traffic, witnesses said.

The government has promised to examine truck strikers’ demands, but says it has already paid more than 500 million dinars ($700 million) to cap fuel prices this year.

Jordan say it needs to maintain fiscal prudence under an under an International Monetary Fund (IMF)-backed structural economic reform program that has helped it cushion the country’s economy.