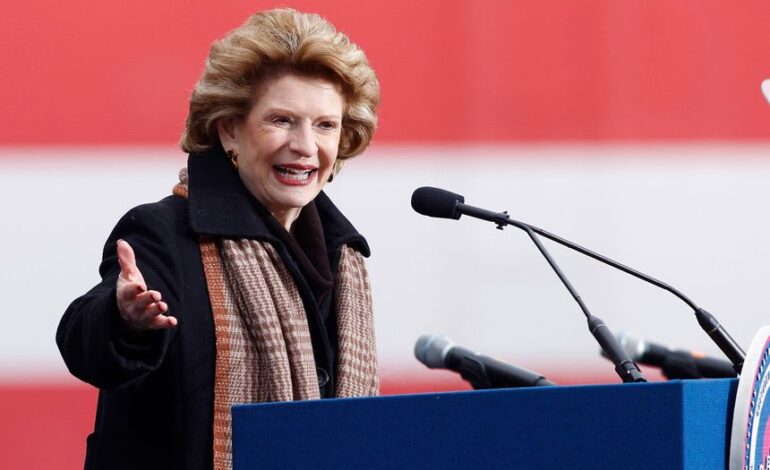 U.S. Senator Debbie Stabenow
U.S. Senator Debbie Stabenow will not seek reelection in 2024, the longtime Michigan Democrat said Thursday, opening up a Senate seat in a key swing state.
“Inspired by a new generation of leaders, I have decided to pass the torch in the U.S. Senate,” she said in a statement on Jan. 5. “I am announcing today that I will not seek re-election and will leave the U.S. Senate at the end of my term on January 3, 2025.”
Stabenow, 72, was first elected to the U.S. Senate in 2000 and is a member of the Senate Democratic leadership as chair of the policy and communications committee.

As the first woman elected to represent Michigan in the U.S. Senate, she’s been leading the fight for working families, the auto industry and farmers for a lifetime in Michigan and for Michigan in Washington, DC. – Gov. Whitmer

U.S. Senator Gary Peters (D-MI) released a statement Thursday on Stabenow’s retirement after 2024:
“Senator Stabenow is a trailblazer and amazing senator for Michigan. Her distinguished record stands as a testament to her devotion to Michigan and families across our country.
“Debbie is a dear friend and mentor. There is no question she will leave an enduring legacy — as a champion for children, women and families, workers, manufacturing and our auto industry, mental health care and the Great Lakes. As chairwoman of the Senate Agriculture Committee, she’s played a powerful role in shaping our agriculture policy, working to end child hunger and focusing on the issues most important to farmers and our agriculture industry in Michigan.
“I will miss serving with her, but know that her work — and our work together — for Michigan is not done. I look forward to working with her over the next two years to again pass a comprehensive farm bill and deliver results for Michigan.”
Peters and Stabenow have served together in the U.S. Senate since 2015.
Governor Whitmer, in a lengthy statement praising Stabenow’s legacy, noted that as governor, she looked “forward to working with her through the end of her term.”
“As the first woman elected to represent Michigan in the U.S. Senate, she’s been leading the fight for working families, the auto industry and farmers for a lifetime in Michigan and for Michigan in Washington, DC,” Whitmer said. “She continues to stand up for workers’ rights and expand paths to good-paying jobs in the trades, bring manufacturing and supply chains home to Michigan, and work across the aisle as chair of the Senate Agriculture Committee to deliver record, bipartisan farm bills.

“She is a fierce protector of our Great Lakes, fought for decades to modernize the Soo Locks and continues to tackle toxic contaminants in drinking water. She’s also a leader in expanding access to affordable health care and ensuring parity for mental health services.”

Stabenow’s announcement opens up a 2024 Senate race in Michigan

“For more than two decades, Senator Stabenow has selflessly committed herself to bettering Michigan and our country,” said U.S. Rep. Debbie Dingell (D- Ann Arbor). “She has been a partner in so much important work – from supporting our auto workers and industry, to fighting for women and children, to improving resources and services for our veterans and so much more. And through it all, she has been a dear friend. Her legacy will live on in the Senate and in our state, and while we will miss her in Washington, her retirement is well deserved after so many years of hard work.”

“As I embark on this venture, I have decided to form an exploratory committee to raise the resources and build the requisite structure and campaign organization to pursue the office of U.S. Senate,” Beydoun said. “I look forward to continuing the conversation with Michiganders alike in order to determine the best way to tackle the most pressing issues affecting our great state.”

At least two prominent Democrats — U.S. Reps. Elissa Slotkin and Dingell — are seriously considering a run, according to people familiar with their thinking. But several other House members could also take a look at it, including Rep. Haley Stevens, according to several Michigan Democrats.

The quick maneuvering and rampant speculation around it is owed, in large part, to the sheer number of Democrats who have long waited for a crack at running for higher office, and also to the abruptness of the announcement.

“I’m stunned,” Dingell, who represents Michigan’s Sixth District and is among the state’s highest-profile politicians, told Politico. “She told me months ago she was running… I can’t imagine our delegation without her, but today is the day we celebrate her and then we figure it out.”

Michigan will be an epicenter of political activity ahead of 2024. For the first time in 40 years, Democrats control all the levers of power: the governor’s mansion, the Secretary of State’s Office, the Attorney General’s Office and both legislative chambers. What they’re able to accomplish, including bringing new business and job opportunities to one of the oldest — age-wise — states in the nation, will have a potentially profound impact on the political landscape.

Republicans are expected to play aggressively in the state as well, and not just at the presidential level. The Republican primary to fill Stabenow’s seat could be just as messy as the Democratic one, with a number of options ranging from former Rep. Peter Meijer, who lost a GOP primary to a Trump-backed candidate last year, to Rep.-elect John James, who just won a congressional seat after a failed Senate bid in 2018, according to several national GOP operatives.

Other prominent Republicans remain in the state, like Tudor Dixon, who lost a bid for governor to Whitmer in November. A person with knowledge of Dixon’s thinking noted that she “isn’t ruling anything out, but remains laser-focused on how she can help Republicans win in 2024.”

Resilient Neighborhoods: A resident-led group has drastically cut vacancies on Detroit’s West Side