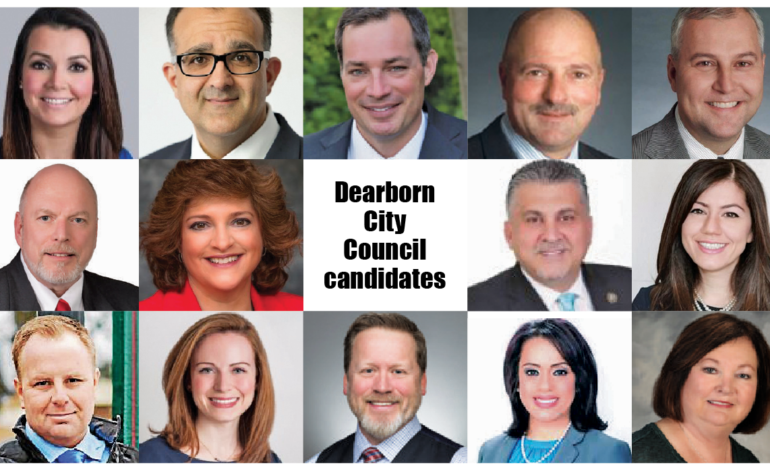 DEARBORN — There are only ten days left until the November 7 general election and residents are still considering their options, but not much has changed since the primary election.

The city council and clerk races are still overshadowed by the contentious mayoral race.

Dabaja and Sareini were the overall top vote-getters in the primary election, with 9 percent each. Abraham and O’Donnell each earned 8 percent and Bazzy received 7 percent.

In an interview with The AANews before the primary, the candidates discussed the biggest challenges they want to tackle in the city. Here is a reminder:

“[They] have been priority issues,” she said. “I will continue to support legislation/resolutions that maintain our standard for public safety, ensuring proper funding and training for police/fire.”

Sareini, an attorney and salesman, wants to ease the burden of taxes on residents. He said he wants to improve the budget in an effort to use money efficiently on all types of “public services, including recreations, parks and waste management.” He said he wants to save taxpayer dollars and better the economic advancement of the city.

Just before he spoke to The AANews on Wednesday, Sareini was knocking on doors with his campaigners.

“We’ve been working really hard and we’ve gotten a positive response,” he said. “A lot of people are very pleased that the city is going in the right direction. We feel that we’ve gained a lot of good support.”

He urged residents to vote on Nov. 7.

During the primary, Abraham, president and CEO of a manufacturing company, told The AANews that his top priorities are the public safety of residents, police officers and firefighters. He aims for an equilibrium when it comes to safety.

“The challenge is to balance ‘public safety’ with the rest of the priorities in the city:  Recreation, libraries, the Historical Museum, public works, veterans and the cultural arts programs,” he said.

O’Donnell, who works as a district business manager for the state, said city government needs to be adjusted in a matter that reflects the changing population, adding that even though the city is not a business, they are related.

“One challenge, although a positive one, is to ensure we maximize The Ford Motor Company Mega Investment to ensure the entire city will benefit, not just certain pockets or populations,” he told The AANews in July.

Bazzy, president and COO of Kenwal Steel Corporation, said he aims for a safer and cleaner environment for children and families.

Another big challenge he wants to meet is finishing the downtown areas and the Southend and east end corridors.

Al-Hanooti, 26, the youngest of the newcomers, said her campaign has allowed her to prove to the public that her age and gender are not disadvantages. She said she hopes to encourage the younger generation to become politically active in the community.

“When I was just 12-years-old I became active with local politics,” she said. “Since then, it has been my goal to become a community servant.”

Bazzi, an intensive care unit nurse, said Dearborn needs a clear plan for its future and that every single issue should be addressed and assessed effectively through that vision, whether it’s taxation, property values, housing, services, beautification, safety, health, drug abuse, budget, education and training or economic matters.

Byrnes, the lead at Democratic Engagement and America Reads at the University of Michigan, promised to focus on “expanding our public gathering spaces, attracting retail that meets residents’ needs and investing in technology that protects our environment.”

She said ensuring the city is open to diversity and guaranteeing that it appeals to gifted first responders and staff are crucial to planning out an affirmative future.

Contingent nurse Dulmage said she wants to make sure that resources are provided to maintain police and fire departments, as safety is her main priority. She said customer service at City Hall could be improved. She also believes summer programs for youth are much needed, as is detecting and assisting those elderly who need help.

Ford, an entrepreneur, told The AANews he wants to mainly tackle wasteful spending in City Hall and bring in better services.

“As your next Councilman, I would put politics aside and put taxpayers first,” he said.

Green, a business owner, said one of the biggest challenges facing the city is a lack of trust in civic leaders.  He said he believes that with his “background of integrity, honor and being a man of [his] word, [he] can restore faith back into the community.”

Haidar, an engineer, said he wants to guarantee the city has enough police and firefighters, plans to review and compare property taxes to those of other cities and ensure that residents are provided with top services. He also promised to tackle substance abuse and support prevention and intervention programs.

Haidar, the lowest Arab American vote-getter in the primary, recently updated The AANews on his campaign progress. He said he tried to reach out to more people and did much better in that respect than during the primary.

“It’s very hard to mobilize the community,” he said. “We need to get them out to vote. We have 25,000 Arab American voters.”

Herrick, a public relations and marketing communications director, also said she wants to ensure tax dollars are used properly for the benefit of residents and businesses.

“I will work to develop diverse business districts and reallocate funds to provide a 4.6 percent residential property tax reduction,” she said.

The AANews also spoke to her about her campaign progress. She said she’s grateful and humbled by the “wide-range of support I’ve received for my campaign to serve on Dearborn City Council” and that residents all over the city appreciate her qualifications and share her vision.

Paris, who works at corporate security at AAA Michigan and has nearly 40 years of experience as police and command officer with the Dearborn Police Department, said his main concern is traffic enforcement.

“I support planning and budgeting for a dedicated number of police officers to enforce serious traffic violations,” he said. “Enforcement should be based on sound data from professional traffic and crash studies, engineering, consultant analysis and citizen complaints. Other challenges include infrastructure, development and fiscal responsibility.”

In the race for city clerk, George Darany faces off against Nofila Haidar.

Darany, a former state representative and former Dearborn City Councilman who now works as a realtor and associate broker at ReMax Team 2000, said his number one priority is to make sure that “all elections are fair, accurate and allow for equal and easy participation of all registered voters.”

He plans on doing so by developing new training programs for city election workers and focusing on ways to identify voter fraud.

Haidar, a real estate agent, did not respond to our inquiry during the primary, but according to her campaign website, she pledges to “provide dependable and accessible service, while maintaining a high level of professionalism and accountability.”