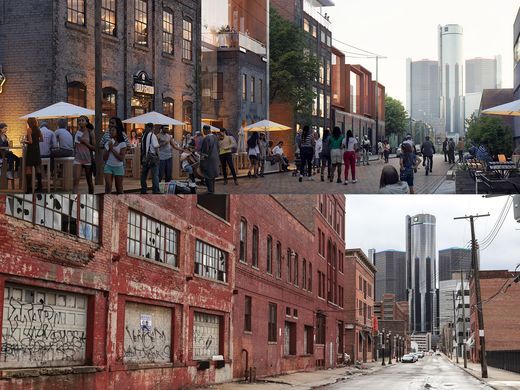 Detroit streets, before and after

DETROIT – On Nov. 7, Detroiters will vote for mayor, elect City Council candidates and choose a city clerk. These elections are the first to take place since the city emerged from state control under Michigan’s emergency manager law.

Because it has come a long way since 2013, when it filed for bankruptcy and went under state control, Detroit has been given the nickname “America’s Comeback City.”

In addition, the poverty rate is at 13.4 percent, a whole point below the national average.

This transformation that moved Detroit from bankruptcy to a fast-paced developing city has earned Detroit its new nickname.

After decades of financial trouble, and after going through bankruptcy, Detroit’s recent municipal leadership helped changed the narrative to a positive one.

Duggan, the first White mayor in 40 years, campaigned in 2013 on the slogan, “Every neighborhood has a future.”

Also, under his leadership, the city saw the installation of 65,000 new LED (light emitting diode) streetlights across the city, which makes the United States the first country to have light-emitting LED streetlights.

Detroiters will also see at least one new City Council member, as an incumbent was eliminated during the primary election.

The city clerk’s office is responsible for overseeing the elections. In 2013, the office endured a scandal during the mayoral and City Council elections that showed incompetence on its part. During a recount of the votes, 4,000 were overlooked.

To help avoid any future incompetence, the city clerk’s office has installed new voting machines that are supposed to be faster and more effective overall.

Here is a breakdown of the candidates: