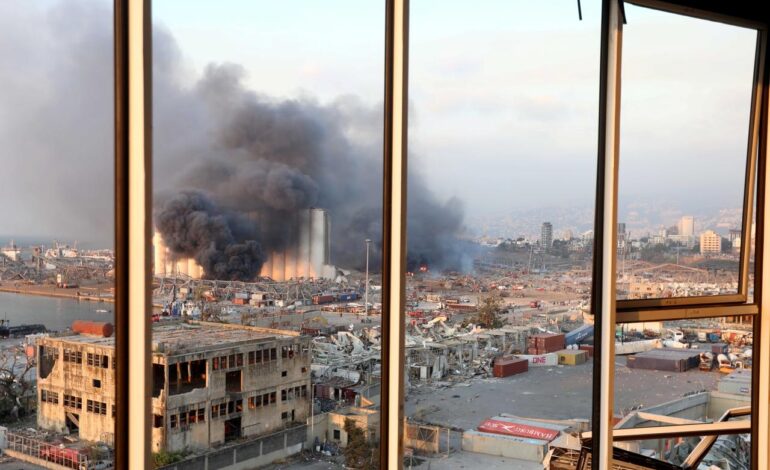 The aftermath of a massive explosion in Beirut, Lebanon on Tuesday, Aug. 4. Photo: Mohamed Azakir

BEIRUT — A huge explosion in Beirut has caused at least 78 deaths and 4,000 injuries. The explosion sent a shockwave across the Lebanese capital, creating massive destruction, shattering windows and collapsing apartment balconies.

Social media became flooded with videos and photos from eyewitnesses on the ground soon after the explosion. The latest number from Lebanon’s health ministry, shows the death toll has risen to 78, with some 4,000 wounded. 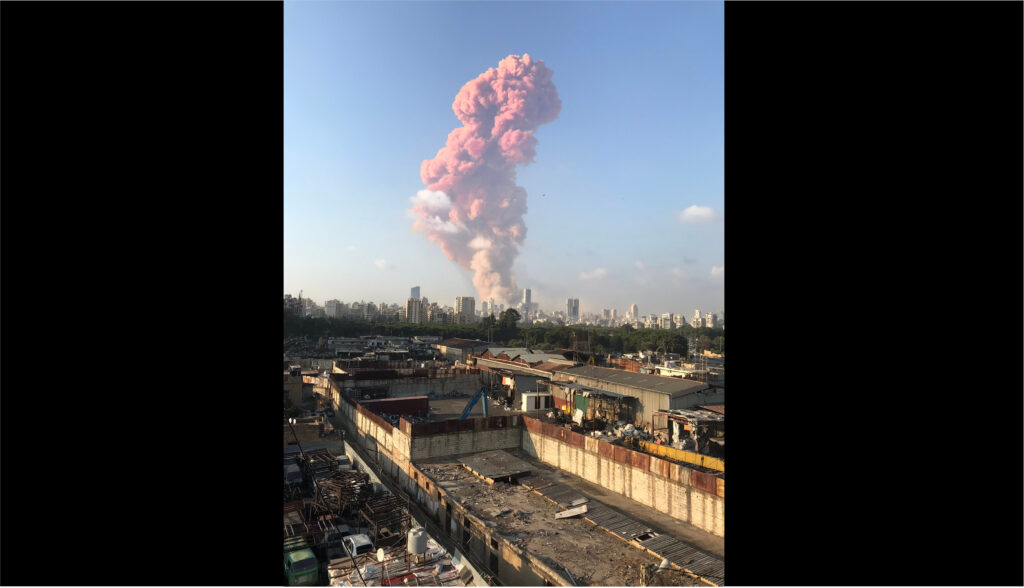 “It is a disaster in every sense of the word,” Lebanese Health Minister Hamad Hassan said in an interview with several television channels while visiting a hospital in the Lebanese capital.

Different angles from footage of the blast shared by residents on social media show a huge column of smoke rising from the port district with clearly visible flames underneath, followed by an enormous blast and shockwave. Those filming the incident from buildings a mile away from the port were thrown backwards. The shockwave tore through buildings in the vicinity of the explosion and caused damage to buildings and infrastructure further out.

Reuters says victims were taken for treatment outside the city because Beirut hospitals were packed with wounded. Ambulances from the north and south of the country and the Bekaa valley to the east were called in to help.

Some emergency workers say they have seen nothing like the catastrophe, as hundreds of people had to be admitted into single emergency departments. The Lebanese High Defense Council has declared Beirut a disaster-stricken city.

Early local reports showed dozens of people being turned away from the Hotel-Dieu hospital, which itself sustained damage from the explosion. Corridors of the hospital are lined with injured people awaiting care.

After much confusion about the cause of the explosion, General Security Chief Abbas Ibrahim said some 2,700 tons of ammonium nitrate exploded in Beirut’s port. Officials have said the highly explosive material was confiscated six years ago.

Lebanese President Michel Aoun said that it was unacceptable that thousands of tons of ammonium nitrate were stored in a warehouse for that long without safety measures, according to statements published on the presidency’s Twitter account. 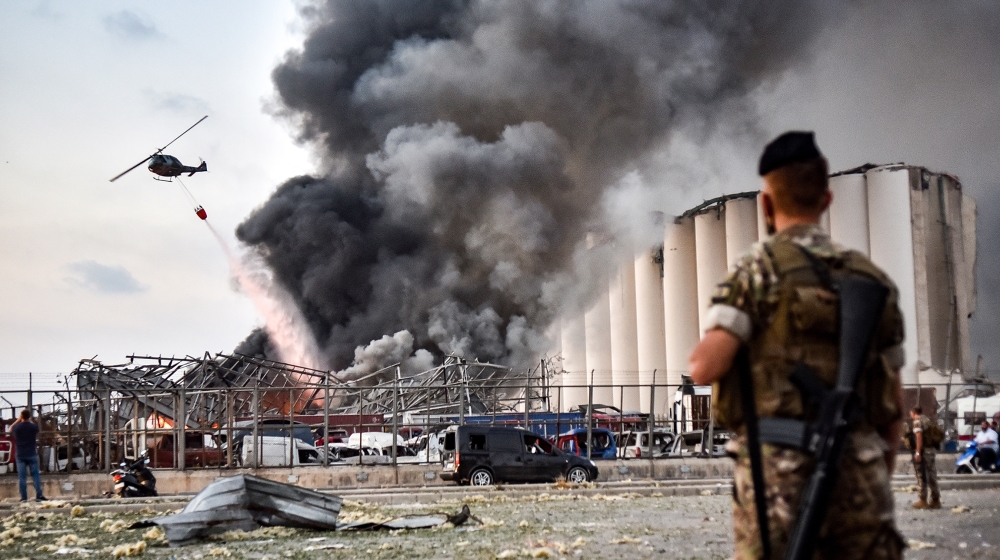 An army helicopter puts out the flames at the scene of an explosion at Beirut’s port. Photo: AFP

“I promise you that this catastrophe will not pass without accountability… Those responsible will pay the price,” Lebanese Prime Minister Hassan Diab said in a televised speech earlier in the day. “Facts about this dangerous warehouse that has been there since 2014 will be announced and I will not preempt the investigations.”

Earlier the Al Jazeera news agency reported the Lebanese interior minister as saying that the Lebanese customs should be asked about why it was there. 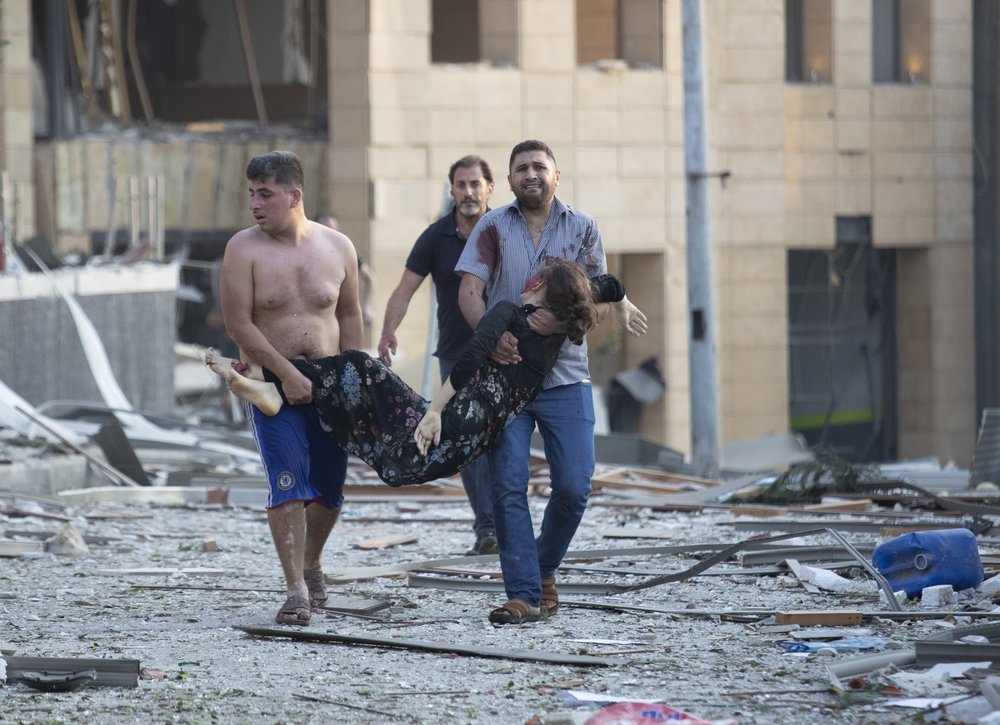 Earlier local media reports indicated the site of the explosion may have been a warehouse for fireworks, though official security sources are not citing that as a potential cause at the moment.

Trump said explosion appears to be a “terrible attack”

President Trump told reporters at the White House on Tuesday that the huge explosion appeared to be a “terrible attack” and not a manufacturing accident.

“We have a very good relationship with the people of Lebanon and we will be there to help,” Trump said. “It looks like a terrible attack. I met with some of our great generals and they seemed to feel that it was. This was not some kind of a manufacturing explosion type of event.

“This was a, seems to be, according to them, they would know better than I would, but they seem to think it was an attack. It was a bomb of some kind.” 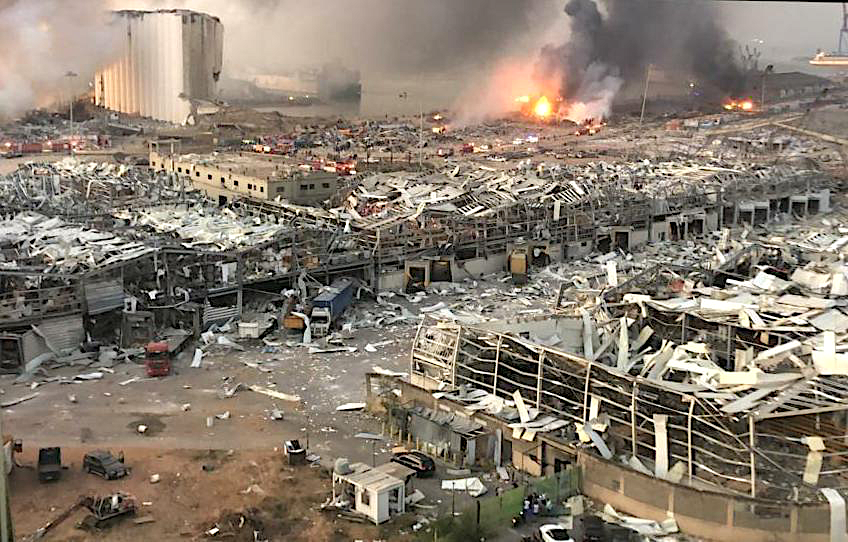 Another angle of the devastation caused by the explosion. File photo

Because of political tensions, social media has become ripe with speculation surrounding Israel’s involvement. However, Israeli officials have said the country has nothing to do with the explosion.

Israeli Foreign Minister Gabi Ashkenazi told Israeli N12 television news that the explosion was most likely an accident caused by a fire. The country has offered humanitarian aid to Lebanon through foreign channels, as the two countries have no diplomatic relations. 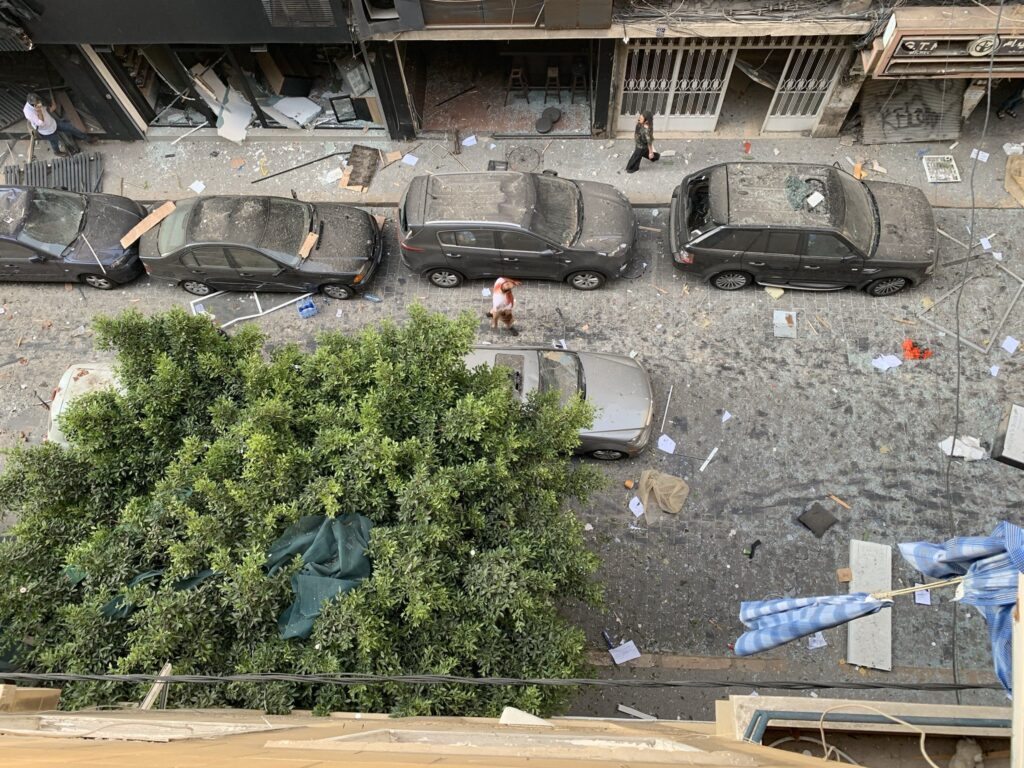 Several other countries have extended aid and condolence after the terrible and sudden tragedy in the already economically crippled country. This includes Turkey, which promised humanitarian aid; Qatar, which will send over field hospitals and western countries like the U.S., Britain and France.

Lebanon’s Hezbollah movement has urged the country’s political factions to come together and overcome the “painful catastrophe.”

Diab has called for a day of mourning on Wednesday, while Aoun called for an emergency meeting of the country’s Supreme Defense Council. 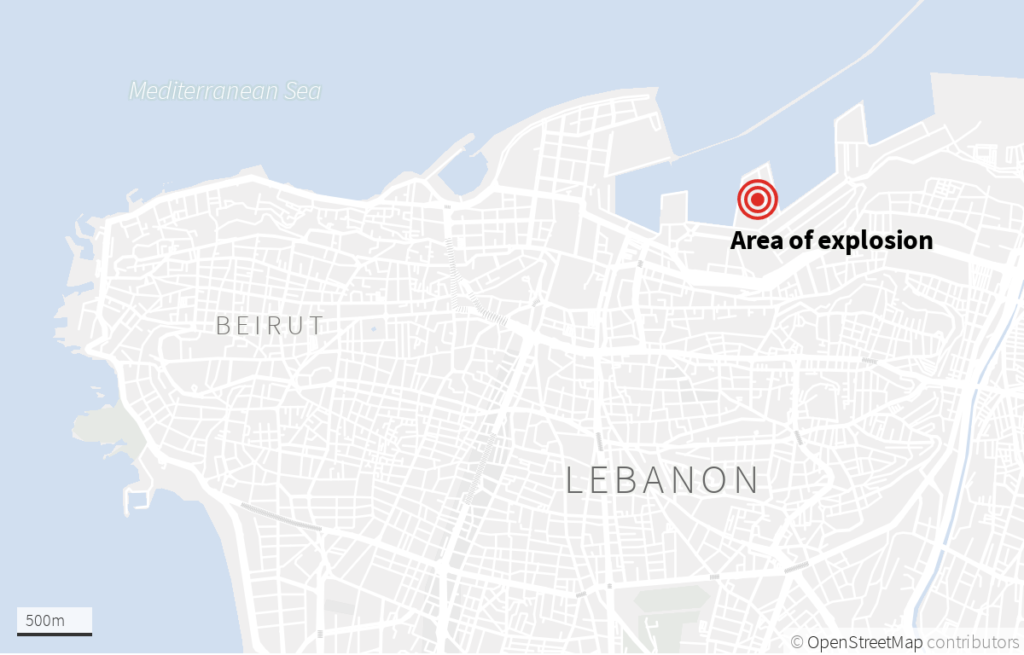 This is a developing story. Stay with us for more up-to-date coverage of events as more information becomes available.

Above: An eyewitness captures a huge explosion at Beirut’s port on Tuesday, Aug. 4