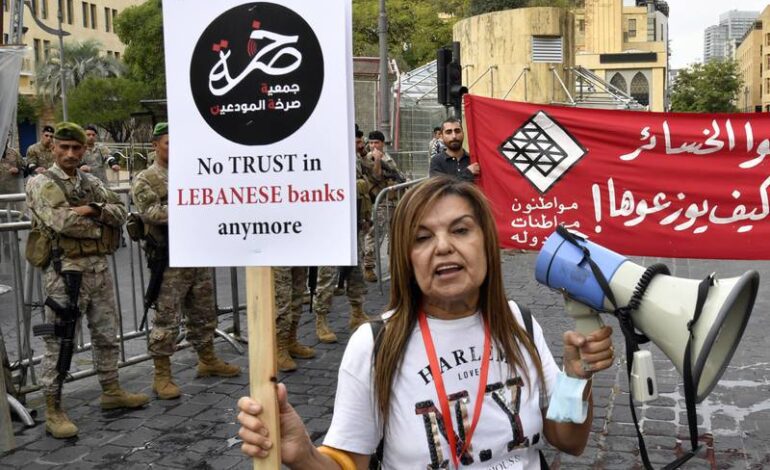 A protester outside the Lebanese Parliament in Beirut. - File photo

A U.S. court of appeals determined this week that cases against Lebanese commercial banks can be tried outside Lebanon, paving the way for more cases by depositors seeking to unlock their frozen funds.

During Lebanon’s three-year financial collapse, banks have imposed tight controls on withdrawals in both U.S. dollars and the local currency, which has lost more than 90 percent of its value.

Those restrictions have yet to become law and have been challenged in both local and international courts by savers who have sought to gain back their money promptly in U.S. dollars, with mixed results.

The Raad family filed a lawsuit in New York’s Supreme Court in December 2020, saying Bank Audi had breached their contract by refusing to transfer their funds abroad at the beginning of the financial crisis, according to the court document.

Bank Audi moved the case to a federal district court, which dismissed its claim on the reasoning that such cases should be heard only by Lebanese courts.

Nada Abdelsater, a lawyer from ASAS Law representing Patricia, Stephanie and David Raad alongside lawyer Douglas Kellner, said this week’s new decision could allow them to proceed with the case, saying it had “made history.”

She said it was the first New York decision against a Lebanese bank since the crisis erupted in 2019.

“The door is now open and the real action begins,” she told Reuters.

“This decision rightly removes the main obstacle that has so far been preventing cases from being taken up… and this New York decision allows us to further pursue proceedings in competent courts outside of Lebanon,” she added.

There was no immediate response from Bank Audi in Beirut to a request for comment filed outside business hours.

Jeffrey Rotenberg, a lawyer from DLA Piper representing Bank Audi in the case, said the decision was “non-precedential.”

“As to this case, there are several other threshold grounds for dismissal that we will continue to advance in the District Court,” Rotenberg told Reuters by email.

Abdelsater said the Raads wanted access to $17 million they had in savings at Bank Audi.