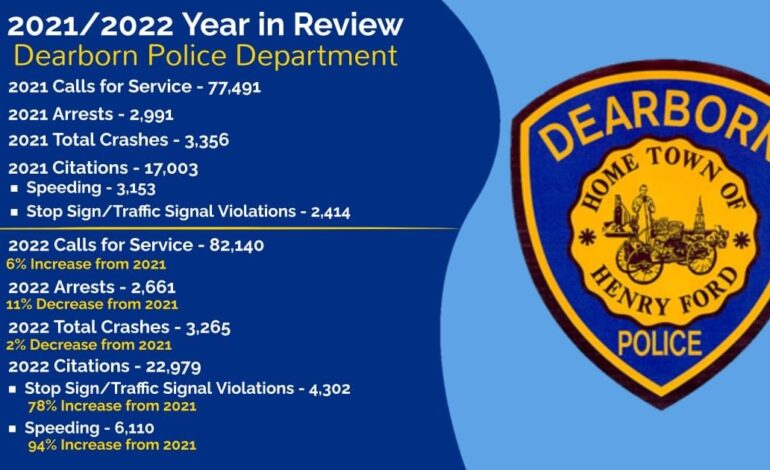 DEARBORN — The Dearborn Police Department has released its “year in review” statistics for 2022. The infographic it released displays an increase or decrease in each category for 2022 in comparison to 2021. The categories include service calls, arrests, crashes and citations for speeding and stop sign and traffic signal violations.

Dearborn Police Chief Issa Shahin told The Arab American News that one of his goals as chief was to increase police presence on the street and in the neighborhoods to combat reckless driving. This resulted in more citations for speeding and running stop signs due to the increased policing throughout the city.

“What we did as a department is we recognized that we wanted to refocus our efforts towards the neighborhoods, choosing to focus on traffic safety and resident concerns, so that’s resulted in fewer arrests for low level traffic offenses and non-violent misdemeanor warrants,” Shahin said.

Total crashes in the city have decreased by 2 percent and Shahin said that this is a byproduct of the amplified police presence in neighborhoods patrolling the area and writing up citations when needed.

The crime rate throughout the city varied for property and violent crimes as there has been an increase in property crime, but fewer violent crimes. Both car theft and larceny from vehicles have been on the rise and Shahin said he encourages residents to lock their car doors as more than 80 percent of the cars broken into are left unlocked.

Violent crimes such as assault and battery have reduced.

“We’ve had a significant decrease in assaultive crimes like assault and battery, aggravated assault,” Shahin said. “We’ve had a nearly 18 percent decrease there.”

He shared ways the department has been able to serve the community to its full capacity; one of those ways is the lateral transfer program, which allows police officers in neighboring cities with up to three years of service to transfer over to the Dearborn Police Department without suffering a pay cut. He said this has significantly helped the department hire and retain qualified officers who can protect and serve the city of Dearborn.

For more information regarding specific statistics for service calls, arrests, crashes and citations in 2022, you can visit the Dearborn Police Department’s transparency dashboard: https://portal.arxcommunity.com/dashboards/community/mi-ci-dearborn-pd

Mona Makki appointed to the Corewell Health East Board of Directors